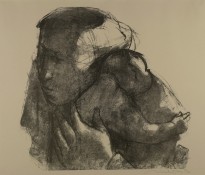 Along with Berlin and Leipzig, Dresden was one of the most important art centres in the GDR (East Germany). The city on the River Elbe was more known for its painters, artists like Otto Dix and those associated with Die Brücke, but in the early 20th century it also evolved into an important city for the graphic arts. After World War II many of the artists who had trained in Dresden revived this aspect of its cultural legacy in a wide variety of styles.
Featuring a selection of around 30 drawings and prints by six artists active in Dres-den - Wilhelm Rudolph (1889-1982), Hermann Glöckner (1889-1987), Wilhelm Lachnit (1899-1962), Hans Theo Richter (1902-1969), Hans Körnig (1905-1989), and Gerhard Kettner (1928-1993) - this mini-exhibition presents a small cross-section of the art of the GDR that the Berlin Kupferstichkabinett presides over in its extensive holdings.
www.neuenationalgalerie.de