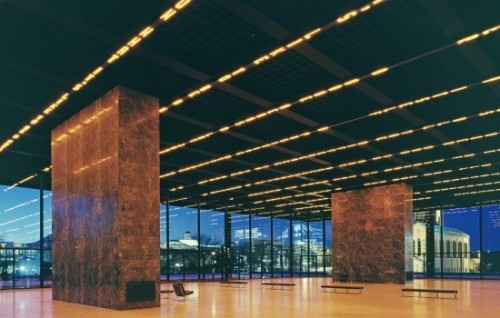 Exactly ten years ago, in 2001, the American conceptual artist, Jenny Holzer, created her impressive 'Installation for the Neue Nationalgalerie'. After a brief period of absence, this work will now be able to be experienced again for the foreseeable future.
Jenny Holzer made a name for herself in the 1970s with explicitly socially critical art. The public sphere became a forum for her literary and often overtly politically motivated texts. Whether they are found printed on T-shirts or on billboards, park benches, emblazoned on multi-storey buildings or the Internet, her sentences are in constant motion. Often illuminated and flickering, they are imposing for their radical articulation and visually exacting nature.

For the New National Gallery, Holzer had thirteen, LED lighting strips, each 49 metres in length, attached to the grid ceiling of Mies van der Rohe's building. The product of strictly coordinated programming, amber-coloured letters and sentences of varying lengths run across the ceiling at varying speeds. The texts are formed from excerpts from her oeuvre, among them her aphorisms, famously dubbed 'Truisms'. The synergy between the ceiling's grid formation and the electronic light signals overwhelms the viewer, as does the confrontation between abstract structure and somantic allusions, as in: 'MEINE AUGEN TASTEN DEINE HAUT AB' ('My eyes feel your skin'). Such sentences as these seem to brush over both the public beneath and the architectural surface above and, through their reflection on the vast windows, even spread out into the site's urban surroundings.
www.neuenationalgalerie.de