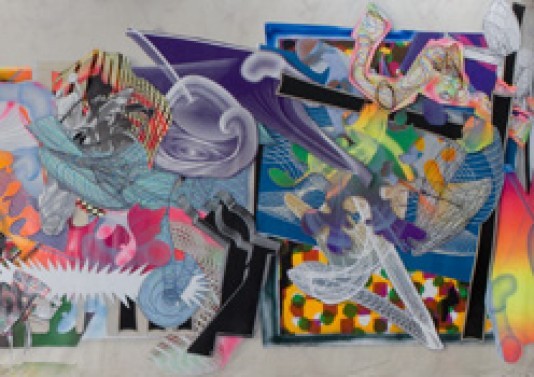 Both are undoubted world stars: the American artist Frank Stella, who has used painting since the 1960s as a medium to pierce the surrounding space, and the Spanish engineer and architect Santiago Calatrava, who through a series of graceful bridges and curved buildings has created highly poetic spacial forms.
Now for the first time ever, the two artists have joined forces to create a combined work: 'The Michael Kohlhaas Curtain', which is to be unveiled to the world for the first time in the New National Gallery in Berlin. The centre of the work is formed by a powerful, vibrant, monumental canvas by Frank Stella from 2008, which the artist created as a loose composition on sheets of tarpaulin. Frank Stella, who has had a close interest in German culture since his days as a student, alludes in his choice of theme to Heinrich von Kleist and 'Michael Kohlhaas', a story of many twists and turns. Santiago Calatrava, on the other hand, has designed a delicate architectural structure to hold Stella's painting that originally measured 30 metres in length. Calatrava's structure is a torus which turns the picture into a ring-shaped panorama.

Hung high up above the visitors in the great expanse of the gallery's glass hall, the installation becomes a complex spacial experience for viewers. Vibrant synthetic colours, dynamic patterns and structures break the rigid visual austerity of Mies van der Rohe's construction. Art, literature and architecture combine to form an energetically exuberant installation that transcends traditional modes of categorisation.
www.neuenationalgalerie.de