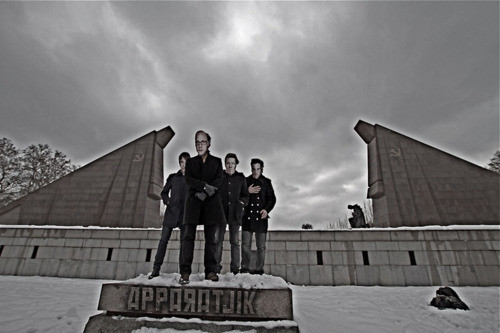 Apparatjik has been invited by the Nationalgalerie - Staatliche Museen zu Berlin to present the collective's first large-scale project in Germany in March 2011. Apparatjik is a transdisciplinary working collective founded in 2008 by four world-renowned musicians: Guy Berryman (London), Jonas Bjerre (Copenhagen), Magne Furuholmen (Oslo), and Martin Terefe (London). Apparatjik functions as an experimental platform and collaborates with a pool of artists, media technicians, and designers, as well as scientists such as M.I.T. Astrophysics Professor Max Tegmark and curator Ute Meta Bauer, Head of the M.I.T. Program in Art, Culture and Technology.

The Apparatjik Light Space Modulator is presented as a twofold project: during two weeks the installation can be accessed in the glass hall of the Neue Nationalgalerie and three unique concerts that will be performed at the same location. Those performances are inspired by the visual experiments of László Moholy-Nagy. Moholy-Nagy taught at the German Bauhaus, as did Mies van der Rohe who was the architect of the Neue Nationalgalerie Berlin. At the center of both the Apparatjik installation and concerts are moving images that project from a large scale cube into the open glass structure of the building into the city space -- a reference to the kinetic Licht-Raum-Modulator created in 1930 by Bauhaus artist Moholy-Nagy.

Apparatjik's project will conclude on March 27 with a special interactive composition performed in collaboration with the Deutsches Kammerorchester. This concert is dedicated to Mies van der Rohe on the occasion of the 125th anniversary of his birth.

The Apparatjik Light Space Modulator incorporates low-res retro-futuristic visuals, gonzo-pop, randomness and pseudo-science, dadaesque humor, and fashion, in a celebration of convergence culture. Apparatjik's blend of popular culture and playful references to art history places them in a space somewhere between art and popular culture. Last but not least, this project by Apparatjik is to be understood as homage to the legendary Meta-Musik-Festival that took place during the seventies at the Neue Nationalgalerie Berlin.

The Apparatjik Light Space Modulator will be accompanied by a publication in collaboration with NODE Berlin Oslo to be published in late 2011 including a comprehensive documentation of this project.
www.neuenationalgalerie.de