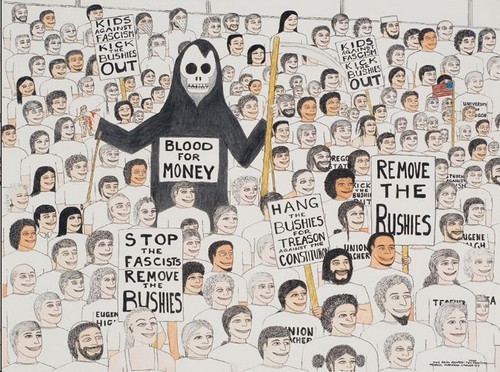 The 2008 Altoids Award is made possible by Altoids, The Curiously Strong Mints.

An innovative exploration of American emerging art, the Altoids Award is granted biennially to four artists nominated and selected by a panel comprised entirely of other artists. Winners in 2008 are each given a $25,000 prize as well as the opportunity to collaborate on this exhibition at the New Museum, providing their earliest exposure to a broad, international audience.
The unique selection process recognizes the role artists have in the development and support of one another’s careers. In 2007, ten artists were asked to each nominate up to five emerging artists. The forty-six nominees were reviewed by a jury comprised of Paul McCarthy, Cindy Sherman, and Rirkrit Tiravanija, all well known for their own groundbreaking artwork and commitment to encouraging new talent. They selected Ei Arakawa, Lauren Kelley, Michael Patterson-Carver, and Michael Stickrod as the winners of the first Altoids Award.
These artists are storytellers; they explore human relationships and the ways in which people convene based on identity, collaboration, family ties, and politics. From Ei Arakawa’s energized and unkempt performances to Michael Patterson-Carver’s humanizing protest drawings, and from Lauren Kelley’s socially conscious stop-motion animations to Michael Stickrod’s intimate edits of family footage, the pieces on view capture an openness that calls for engagement. The four artists produce work that is disparate, but when exhibited together it composes a vivid picture of American art today, and a complex, unsettling view of America itself.
This exhibition is organized by Massimiliano Gioni, Director of Special Exhibitions, and Jarrett Gregory, Curatorial Assistant.
www.newmuseum.org