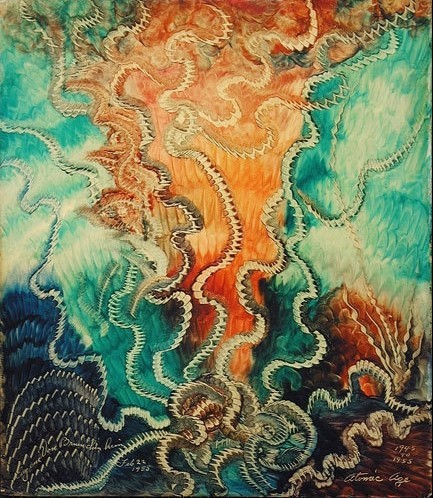 Second floor on view through October 5

"After Nature" surveys a landscape of wilderness and ruins, darkened by uncertain catastrophe. It is a story of abandonment, regression, and rapture—an epic of humanity and nature coming apart under the pressure of obscure forces and not-so-distant environmental disasters. Bringing together an international and multigenerational group of artists, filmmakers, writers, and outsiders, the exhibition depicts a universe in which humankind is being eclipsed and new ecological systems struggle to find a precarious balance.
The artists in "After Nature" share an interest in archaic traditions and a fascination for personal cosmologies and visionary languages. It is a peculiar form of magic realism that emerges from the works on view, coupled with a renewed belief in art as a tool for mythmaking.
Departing from the fictional documentaries of filmmaker Werner Herzog, "After Nature" assembles a collection of prophetic images and outlandish forms—a cabinet of curiosities that pieces together a fragmented and unreliable encyclopedia. In his 1999 manifesto, Herzog described a truth liberated from fact: a poetic, ecstatic truth that "is mysterious and elusive, and can be reached only through fabrication and imagination." The works in "After Nature" aspire to such: folding fact into fiction, the exhibition brings together artworks that can be interpreted as relics, idols, and documents. Temporally detached from any point of orientation, the exhibition emerges as a study of the present from a place in the future. A requiem for a vanishing planet, "After Nature" is a feverish examination of an extinct world that strangely resembles our own.
The exhibition includes work by Allora and Calzadilla, Paweł Althamer, Micol Assaël, Fikret Atay, Roger Ballen, Huma Bhabha, Maurizio Cattelan, William Christenberry, Roberto Cuoghi, Bill Daniel, Berlinde De Bruyckere, Nathalie Djurberg, Reverend Howard Finster, Nancy Graves, Werner Herzog, Robert Kusmirowski, Zoe Leonard, Klara Liden, Erik van Lieshout, Diego Perrone, Thomas Schütte, Dana Schutz, Tino Sehgal, August Strindberg, Eugene Von Bruenchenhein, and Artur Żmijewski.
Organized by Massimiliano Gioni, Director of Special Exhibitions, the show spans three floors and includes over ninety works.
www.newmuseum.org