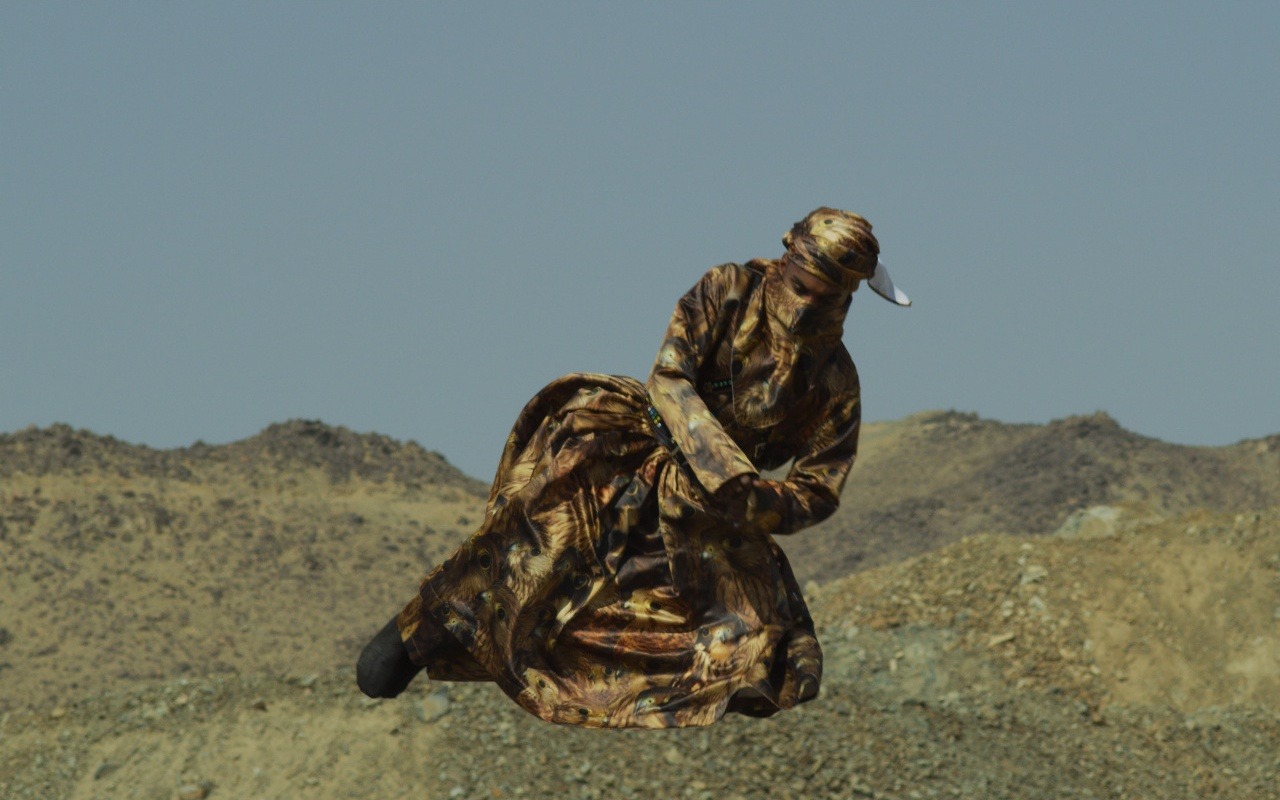 In her videos and performances, Ahaad Alamoudi (b. 1991, Jeddah, Saudi Arabia) engages with the traditional symbols and images that have shaped and defined contemporary Saudi culture.

Alamoudi uses the desert as a backdrop for constructed, vividly charged scenarios in which she incorporates traditional Saudi symbolism into personal narratives that address her experience as a young female artist living and working in Saudi Arabia today. Interweaving her heritage—Saudi customs and folklore—with highly stylized video editing, audio mixing, and production, Alamoudi conveys the layered complexities of her home country’s changing social fabric.

In Those who don’t know falcons grill them (2018), a cohort of young male dancers perform the Khabayti, a hybrid dance influenced by both Hejazi and Sufi traditions. The choreographed pageantry of swirling, sword-wielding men and boys was once used in preparation for war, and is now typically performed at social gatherings by male dancers. However, at segregated events, female dancers are able to perform the Khabayti for women-only audiences. Donning custom-made garments patterned with falcons—the national bird of Saudi Arabia, which represents courage, power, and national identity—Alamoudi’s dancers are propelled by the hypnotically mastered sounds of the mizmar, a wind instrument common in traditional Arabic music. Appropriating the format of a music video, Alamoudi remixes references to traditional Arab culture and, as a woman director, subverts the male gaze typical of the genre by using only male performers.

Alamoudi’s video NIUN (2018), made in collaboration with American artist Michael Mogensen, is inspired by thirteenth-century Persian physician, geographer, and writer Zakariya al-Qazwini’s story, Awaj bin Anfaq, considered one of the first works of science fiction, about an alien who visits Earth to study the oddities of human behavior. The video follows two extra-terrestrial protagonists (NIUN 1 and NIUN 2) who claim the desert as their own and begin to lay down the foundation for a new civilization. Together, the pair devise seven essential components to ensure a prosperous future: energy, water, mobility, biotechnology, entertainment, technology, and manufacturing. The outlanders chant mantras—ardi (“my land”), noor (“light”), hajira (“traveller”), and hajirati (“my rock”)—which, for the artist, reinforces the importance of language and open communication in cultivating the future.

For Bahara (Men of the sea) (2019), Alamoudi stages a soundscape in which the reverberations of the sea are merged with a modernized version of the song of “El Yamal,” a folk anthem sung by Saudi pearl divers and sailors, known in Arabic as Bahara, to give them strength in their seafaring endeavors. A slideshow of static images—fragmented body parts in the desert, an orange backdrop, and a digitally-rendered silicone vessel—creates an atmosphere of relative calm in stark contrast with the arduous tasks of fishing and pearl diving. For the artist, the work honors these seamen, especially the pearl divers, whose now defunct trade was in its heyday a crucial part of the economy of the eastern coast of the Arabian Peninsula.

Ahaad Alamoudi (b. 1991, Jeddah, Saudi Arabia), was raised between England and Saudi Arabia, and lives and works in Jeddah, Saudi Arabia. Recent group exhibitions include Hockney Gallery, London; Bates College of Art, Lewiston, Maine; Minnesota Street Project, San Francisco; and Station Museum of Contemporary Art, Houston. In 2018, Alamoudi was the recipient of the Crossway Foundation x Middle East Now Festival Residency in Florence. She is represented by Athr Gallery in Jeddah, where she will have a solo exhibition in 2020. Alamoudi is currently in residence at Residency Unlimited, New York. This presentation at the New Museum marks the artist’s first solo exhibition in the United States.

Concurrent with Alamoudi’s Screen Series presentation, the video I was told ice wouldn’t melt in heat (2019) will be screened in the New Museum’s Lower Level Theater on select days throughout August 2019. For this four-hour performance, the artist instructed a male performer to brave the harsh desert weather—a blistering sun and an impromptu dust storm—until 250 blocks of ice had completely melted. In the fourth hour, frustrated by the hazardous conditions, the performer breaks character, attacking and then attempting to repair the ice structure; ultimately bringing the performance to an abrupt end.