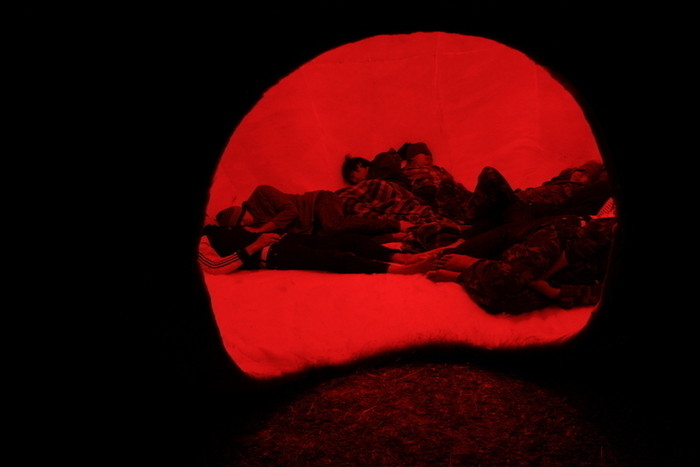 Opening in May, “Apichatpong Weerasethakul: Primitive” will be the first New York exhibition devoted to the work of the internationally acclaimed Thai artist and filmmaker Apichatpong Weerasethakul. Primitive (2009)—which is having its American debut at the New Museum—is his most ambitious project to date: a multi-platform work consisting of an installation of seven videos and related pieces.

Weerasethakul’s works are often set in the lush forests and quiet villages of the rural Isaan region of northeast Thailand. His films use inventive narrative structures to explore intersections between man and nature, rural and urban life, and personal and political memory. Surreal imagery and a sensuous, languid pace give his work a dreamlike quality. Characters shift identities fluidly, and often reappear in subsequent films. Eschewing Western cinematic references, Weerasethakul’s filmic language draws upon a range of local influences, from Thai folklore to television soap operas.

The Primitive project was first conceived by Weerasethakul during the research for his most recent feature film, Uncle Boonmee Who Can Recall Past Lives (2010), which won the prestigious Palme d’or Prize at the 2010 Cannes Film Festival. The film tells the story of a dying man in a rural Thai village, being cared for by apparitions of his wife and son while he envisions his past lives. Primitive focuses on the farming village of Nabua and the political and social history of its inhabitants. Nabua was the site of clashes between the Thai military and communist-sympathizing farmers during the 1960s and ’70s. Brutal repression by the military forced many of the local male farmers into hiding, leaving the village inhabited primarily by women and children. Weerasethakul draws parallels between this social dislocation and an ancient local legend about a widow ghost who abducts any man with the temerity to enter her empire.

Primitive melds documentary and fiction as it follows the activities of a group of male teenagers, descendants of the lost generation of Nabua’s men. The loose narrative of this work centers upon the building of a spaceship that can link the villagers to the past and the future. The intersecting videos map and illuminate the architecture and landscape of Nabua and capture the men in moments of creativity, play, and remembrance. The latent history of political strife that haunts Primitive reverberates strongly with recent tensions between the Thai military and the working class of Bangkok, many of whom hail from such rural communities as Nabua.

Apichatpong Weerasethakul was born in 1970 in Bangkok. Initially trained as an architect, he went on to study filmmaking at the School of the Art Institute of Chicago. He has produced six feature films to date including the award winning Tropical Malady (2004) and Blissfully Yours (2002). Primitive was previously exhibited at the Haus der Kunst, Munich and the Foundation for Art and Creative Technology (FACT), Liverpool in 2009. In 2008, he received the Fine Prize from the 55th Carnegie International, US; and in 2010 he was one of four finalists for the Solomon R. Guggenheim Museum’s Hugo Boss Award.