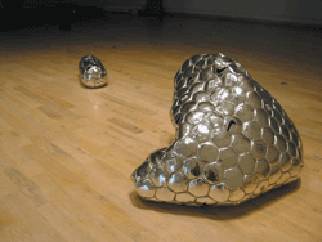 The New Museum of Contemporary Art is proud to present the first North American survey of the work of Brian Jungen (b. 1970). Based in Vancouver, Jungen has received significant international acclaim for his imaginative and critical transformation of consumer goods into anthropomorphic forms that evoke a range of contexts from Aboriginal sculpture to natural history museums and retail display. His installations integrate the complex circuitry of desire, mimicry, and fetishization that shape global cultural and economic exchange. This exhibition includes several bodies of work, produced over the last ten years, some of which are being seen for the first time in their entirety. This exhibition also introduces a new series of works, Talking Stick (2005), produced by carving socially charged words and phrases into baseball bats.

As you enter the gallery, you are confronted by what appear to be large whale skeletons. From twenty-one to forty feet in length these skeletons float in space, reminiscent of a museum of natural history display as much they are of a museum of contemporary art. Yet, in this display the pod, or family of three whales, appears to be playfully swimming in and out of the grid of columns. Upon closer inspection, it is possible to discern that the skeletons - the ribs, backbones, flippers, and skulls - are in fact produced by disassembling and reconfiguring the same variety of common white plastic backyard chair. The irony of Jungen's construction of the natural world through petroleum byproducts should not be overlooked as it speaks to his sense of our place in the same ecosystem and larger life cycles such as the whales themselves. The largest of the three whales, Cetology (2002) is named after the branch of marine mammal science devoted to the study of whales. The second whale is called Vienna (2003), after the city in which it was first installed. The third work, Shapeshifter (2000) pays homage to the notion of morphing or transmogrification. In many myths, a shapeshifter is a figure that might change, or morph, from human to animal form and vice versa. This is the first time all three sculptures have been displayed together.

This idea of the shapeshifter, as well as the act of cutting up and reassembling of consumer products continues in the room to the left of the stairs as you enter the gallery. Here you will find all twenty-three of Jungen's recently completed series of Prototypes for New Understanding (1998-2005). This was the first body of work that brought him the attention of the broader public. The prototypes were produced by cutting apart Nike Air Jordan shoes, and reassembling them to suggest the formal qualities of Northwest Coast Aboriginal masks. In describing the genesis of the Prototypes, Jungen writes, "it was interesting to see how by simply manipulating the Air Jordan shoes you could evoke specific cultural traditions whilst simultaneously amplifying the process of cultural corruption and assimilation. The Nike 'mask' sculptures seemed to articulate a paradoxical relationship between a consumerist artefact and an 'authentic' native artefact."1

Jungen grew up in the remote logging town of Fort Saint John, in Northeastern British Columbia, approximately 700 miles north of the border with the United States, in a family of Swiss and Aboriginal (Dane-zaa) descent. Yet, to read these sculptures as simple commentary on the commodification of Aboriginal culture would be a mistake. The exhibition curator, Daina Augaitis, points out that Jungen "is as well-versed in Dane-zaa family stories as he is in Western art history."2 In this regard, the transformation through cutting and reassembling can be linked to an interest in the legacy of Gordon Matta-Clark, or even Bill Woodrow, who became well known in the late 1970s and the 1980s for reworking objects into funky assemblages that nonetheless retained the gestalt of the original object. Unlike these artists however, Jungen's assemblages suggest how in the global marketplace, cultural identification and aspiration increasingly collapse into forms of brand recognition.

The third, more loosely defined body of works in this exhibition is invested in a critique of minimalism and more generally argues against the empty promises of utopian form. Jungen infuses Minimalism's characteristic deployment of integers of identical objects or industrial materials with an interest in thinking through issues of representation and social critique. This interest is drawn from the multi-faceted tradition of photo-conceptual practice that emerged in Vancouver in the late 1960s and includes such well-known artists as Stan Douglas, Roy Arden, Ken Lum, Jeff Wall, and Ian Wallace. It also draws on the evolution of consumer and social critique that was of vital importance in the New York art world of the mid- to late- 1980s as exemplified by such artists as Haim Steinbach and Hans Haacke. This loose grouping of works includes Isolated Depiction of the Passage of Time (2001), Michael (2003), Little Habitat I and II (2003), and Modern Sculpture (2005).

Isolated Depiction consists of a handcrafted cedar pallet that is surmounted by neatly stacked cafeteria trays in several colors. While the form can be understood in terms of the classic minimalist cube, it is also a facsimile of an escape pod that was fashioned by an inmate at one of Canada's largest prisons. Knowing that the cafeteria trays were delivered by truck to another facility for cleaning, the prisoner had built up and glued together many cafeteria trays, leaving a void at the center in which he could hide while the trays were being transported. In this sculpture the void is taken up with a television playing daytime programming and soap operas.

Michael consists of aluminum facsimiles of Air Jordan display boxes, while Little Habitat I and II are geodesic domes - a form associated with the utopian architectural and social vision of Buckminster Fuller - created by reassembling the display boxes used to produce the Prototypes for New Understanding. These works conflate the empty dreams of utopian architecture with the false promises of commercial products - monuments to disappointment.

Jungen speaks of how his "approach to working with existing objects and altering them is directly related to a material sensibility I experienced in my childhood, the way my mother's family would use objects in ways that weren't originally intended, a kind of improvisatory recycling that was borne out of both practical and economic necessity. Witnessing that resourcefulness continues to exert a deep influence on how I relate to the world as an artist."3 If Jungen's work manipulates a collective desire for brands and consumer goods, he also encodes a skepticism towards its promise. His work is as much layered with allusion and critique as it is evocative of a state of wonder and plainspoken directness.


Brian Jungen is organized and circulated by the Vancouver Art Gallery, with the support of the Audain Foundation, The Andy Warhol Foundation for the Visual Arts, and Foreign Affairs Canada.

The presentation of Brian Jungen at the New Museum of Contemporary Art is supported in part by Bob Rennie and Carey Fouks.


The New Museum of Contemporary Art receives general operating support from the Carnegie Corporation, the New York State Council on the Arts, the New York City Department of Cultural Affairs, JPMorgan Chase, and members of the New Museum.