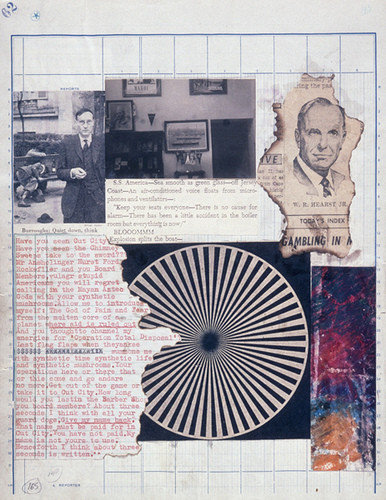 The New Museum will present “Brion Gysin: Dream Machine,” the first US retrospective of the work of the painter, performer, poet, and writer Brion Gysin (born 1916, Taplow, UK–died 1986, Paris). Working simultaneously in a variety of mediums, Gysin was an irrepressible inventor, serial collaborator, and subversive spirit whose considerable innovations continue to influence musicians and writers, as well as visual and new media artists today. The exhibition will include over 300 drawings, books, paintings, photo-collages, films, slide projections, and sound works, as well as an original Dreamachine—a kinetic light sculpture that utilizes the flicker effect to induce visions when experienced with closed eyes. “Brion Gysin: Dream Machine” is curated by Laura Hoptman, Kraus Family Senior Curator, and will be on view in the New Museum’s second floor gallery.

“An exhibition of an artist who died more than twenty years ago represents an approach to the notion of the new that is somewhat different from the Museum’s standard—one that emphasizes relevance and fresh information over chronology, and brings to the fore a relatively neglected yet very influential innovator who continues to have a strong impact on artists working today,” said Laura Hoptman.

In 1959, Gysin created the Cut-Up Method, in which words and phrases were literally cut up into pieces and then rearranged to untether them from their received meanings and reveal new ones. His Cut-Up experiments, which he shared with his lifelong friend and collaborator William S. Burroughs, culminated in Burroughs and Gysin’s The Third Mind, a book-length collage manifesto on the Cut-Up Method and its uses. Transferring this notion to experimenting with tape-recorded poems manipulated by a computer algorithm, Gysin created sound poetry and was among the earliest users of the computer in art. At the same creative moment, Gysin conceived of the Dreamachine. During the ’60s, ’70s, and ’80s, Gysin would continue his collaborations, and prove to be a mentor for myriad artists, poets, and musicians, from John Giorno to Brian Jones, to David Bowie and Patti Smith, to Genesis Breyer P-Orridge and Keith Haring, among many others.