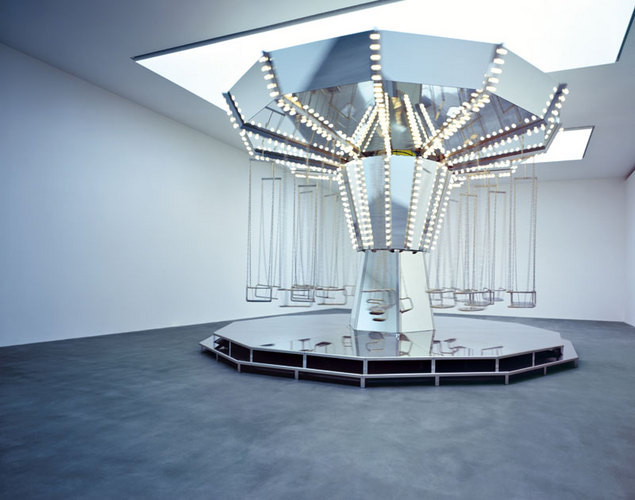 This autumn, the New Museum will present the first New York survey exhibition of the work of the German artist Carsten Höller (b. 1961, Brussels, lives and works in Stockholm). Over the past twenty years, Höller has created a world that is equal parts laboratory and test site, exploring such themes as childhood, safety, love, the future, and doubt. Höller left his early career as a scientist in 1993 to devote himself exclusively to art making, and his work is often reminiscent of research experiments. His pieces are designed to explore the limits of human sensorial perception and logic through carefully controlled participatory experiences.

The New Museum’s exhibition will include work produced over the past eighteen years in an immersive, interactive installation choreographed in collaboration with the artist. Höller will actively engage the Museum’s architecture, with each of the three main gallery floors and lobby of the building presenting a focused selection of pieces that demonstrate different experiential dimensions of his work. Functioning as an alternative transportation system within the Museum, one of Höller’s signature slide installations will run from the fourth floor to the second, perforating ceilings and floors, to shuttle viewers through the exhibition as a giant 102-foot-long pneumatic mailing system. The exhibition features a new light installation; disorienting architectural environments; a spectacular mirrored carousel; and a sensory deprivation pool, among others. Also included will be a recreation of Höller’s Experience Corridor, where viewers are invited to undertake simple but affecting tests on themselves.

The selected works emphasize the experimental quality of Höller’s work and reveal the complex universe of one of the most significant European artists to emerge in the past twenty years. Höller came to prominence alongside a group of artists in the 1990s including Maurizio Cattelan, Dominique Gonzalez-Foerster, Pierre Huyghe, Philippe Parreno, and Rirkrit Tiravanija who worked across disciplines to re-imagine the experience and the space of art. Höller stands out among this group for the manner in which his installations drew on the history and method of scientific experimentation to destabilize the viewer’s perception of space, time, and the concept of self. In providing this first opportunity for the public here to examine the full scope of Höller’s artistic experiments, the exhibition follows in the New Museum’s long tradition of introducing the most adventurous international artists to an American audience.

Carsten Höller’s work is first and foremost concerned with altering our basic assumptions about what we see, feel, and understand about ourselves. Over the years, the artist has employed psychotropic drugs, flashing lights, and architectural alterations to overwhelm viewers with visual stimuli and challenge accepted self-perceptions. For example, the new installation Double Light Corner (2011) uses a sequence of flashing lights to give the viewer the sensation that the space around them is flipping back and forth. Höller also has exhibited a variety of adapted amusement park rides, their speeds slowed until they move almost imperceptibly. His Mirror Carousel (2005) provides riders with a radically different physical experience than the traditional fairground merry-go-round, while at the same time reflecting and illuminating the space surrounding it. In such works, Höller invites us to reconsider the meanings of play and participation. In concert with his giant mushroom sculptures and hyperrealistic sculptures of animals, the artist creates a visionary world that hovers below the surface of what we experience every day.

Höller’s art has often taken the form of proposals for radical new ways of living. He has created sculptures and diagrams for visionary architecture and transportation alternatives, like his renowned slide installations and flying cities. These concepts may seem impossible in the present day, but suggest new models for the future. The artist’s proposals and structures invite the viewer to re-imagine the social and sensorial possibilities of domestic space. During the 1990s, Höller collaborated with artist Rosemarie Trockel to create structures shared between humans and animals such as pigs, birds, and mosquitoes, calling into question hierarchies of species and the roles of the observer and the observed. Recently, Höller has invited viewers to share the exhibition space with a variety of creatures from reindeer to canaries to mice.

At the New Museum, viewers will be encouraged to test a variety of sculptural experiences. In Höller’s Psycho Tank (1999), visitors will float weightlessly in a sensory deprivation pool, providing a strange out-of-body experience. In these scenarios, as in his other work, Höller treats the viewer as the subject and audience for his radical and disorienting experiments.