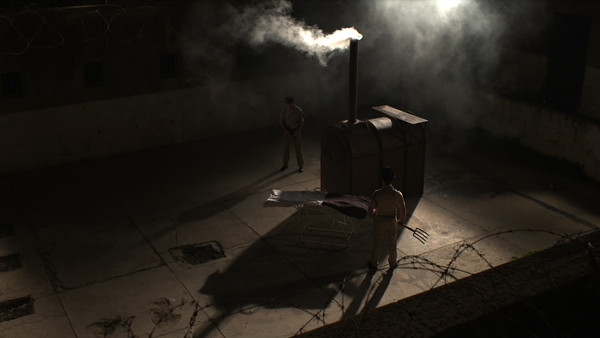 This latest presentation in the New Museum's ‘Stowaways’ series marks the New York premiere of Dani Gal’s Nacht und Nebel (2011). Gal’s works often reveal overlooked historical facts and question the ways in which meaning and information are typically conveyed in documentary film. Nacht und Nebel was originally commissioned for the 54th Venice Biennale in 2011 and is based on an interview Gal conducted with Michael Goldman—a Holocaust survivor and one of the policemen who took part in a secret mission to dispose of the remains of the notorious Nazi war criminal, Adolf Eichmann, in 1962.

Eichmann was tried and convicted in an Israeli court for committing war crimes and crimes against humanity, and was executed by hanging on May 31, 1962. After Eichmann’s body was cremated, a group of police officers were ordered to sail six miles offshore to scatter his ashes in international waters off the Jaffa coastline. This mission was designed to ensure that no future memorial could be built for Eichmann at a burial site and that no nation would serve as his final resting place.

Nacht und Nebel is a cinematic reenactment of Michael Goldman’s experience transporting, guarding, and scattering Eichmann’s ashes at sea. In this work, Gal creates a telling psychological portrait of the policemen charged with keeping the mission a secret. The phrase “Nacht und Nebel”—literally translated from the German as “night and fog”—was also a term for Adolf Hitler’s covert operation, during which political activists and resistance members opposed to the Nazi regime were eliminated.

Dani Gal (b. 1975 in Jerusalem, Israel) lives and works in Berlin, Germany. Nacht und Nebel has been shown at the 54th Venice Biennale (2011), MUMOK, Vienna, Austria (2011), and the Kunsthaus Zürich, Switzerland (2012). Gal’s work has recently been included in the 12th Istanbul Biennale (2011) and exhibitions at the Herzliya Museum of Contemporary Art, Israel (2011), and the Zabludowicz Collection, London (2012). This is Gal’s first New York museum presentation.

“Dani Gal: Nacht und Nebel” is organized by Margot Norton, Curatorial Associate and is part of the Museum’s ‘Stowaways’ series—a constellation of episodic projects and spontaneous interventions in spaces throughout the New Museum.
www.newmuseum.org