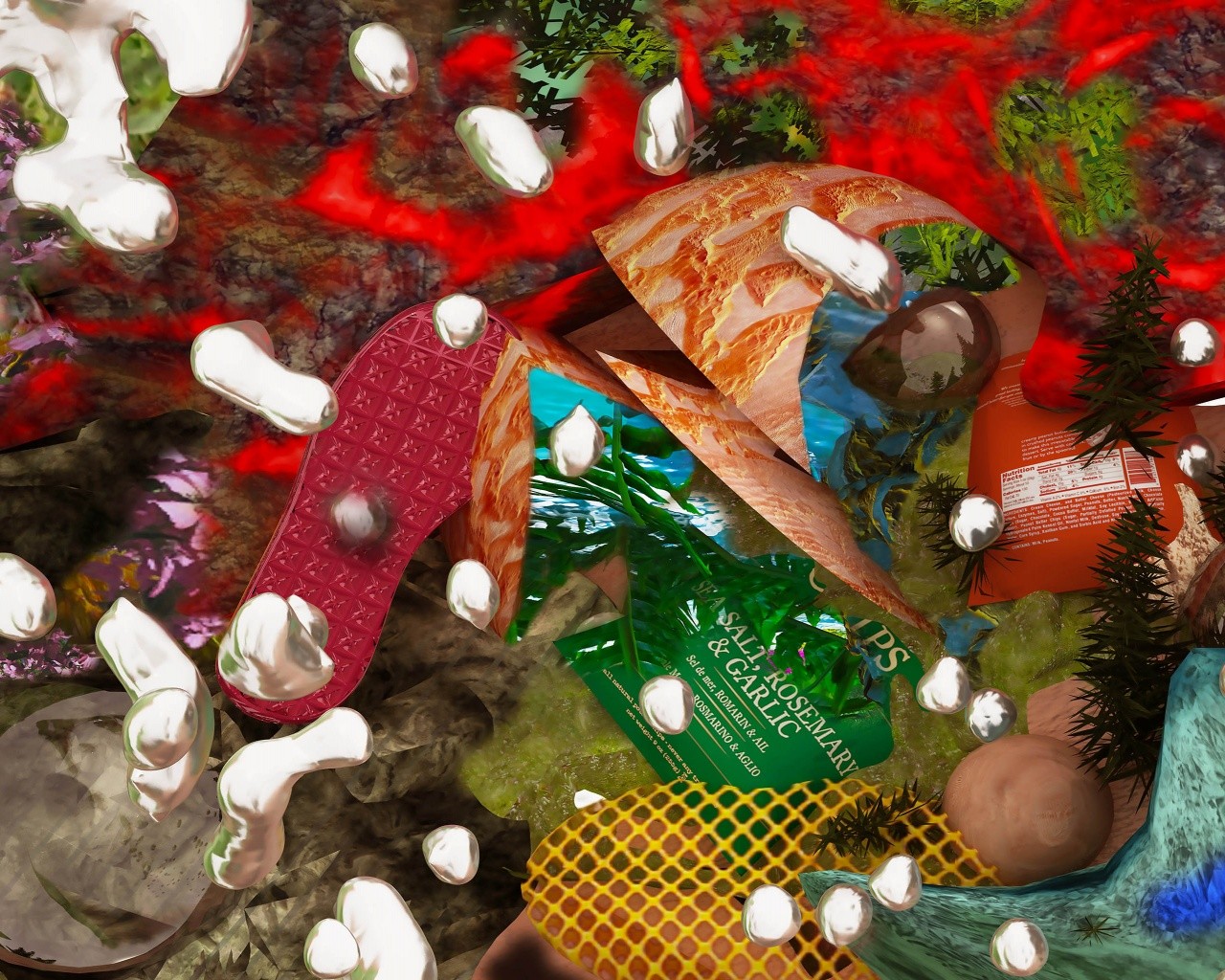 As part of the New Museum’s ongoing Stowaway Series, Eva Papamargariti (b. 1987, Larissa, Greece) has realized a special project, titled Factitious Imprints, for the Shaft Space between the Third and Fourth Floors.

In her practice, Papamargariti uses time-based mediums to explore the relationship between digital images and our material reality. Her works delve into issues related to simultaneity, visual doubling, the merging of our surroundings with digital space, and the constant diffusion of images that define our everyday experience. Using a variety of digital tools and software platforms in her videos and installations, she creates 2-D and 3-D spaces in which images of real objects are manipulated and brought together with fabricated surfaces. Papamargariti exhaustively surveys and analyzes both existing digital animations and new renderings of forms and motions—such as running water, body gestures, or drones moving across a landscape—and combines them with phone and camera footage to distort, fragment, and transform the objects, movements, and environments they depict.

Comprising a video work and five printed fabric banners, Factitious Imprints features images of landscapes ranging from imagined settings that have been constructed with digital tools to real places that have been transformed through landfills and other human attempts to combine the artificial and the synthetic with the natural. Conflating processes of digital and organic transformation, Papamargariti looks at how surfaces can obscure these processes and questions how nature’s imprint will exist or endure in the future. What will a fossil from our time look like, for example? Incorporating perspectives and camera imagery taken from navigation tools such as drones, Google Maps, and handheld recording devices, Factitious Imprints courses through a distorted landscape of overlapping surfaces—from the artist’s own skin to food containers to simulations of plants and oceans—that shifts and changes form as we move through it. By collaging these images on synthetic fabrics including fleece, Lycra Sheen, suede, and voile that are resistant to natural phenomena such as wind, water, and fire, Papamargariti has created banners that are both an imprint of recognizable shapes and textures and an attempt to subvert the surfaces they refer to.

Eva Papamargariti was born in Larissa, Greece, in 1987 and currently lives and works in London. Her work has been recently featured in exhibitions at Assembly Point, London (2015); the Museum of the Moving Image, New York (2015); Musée d’art contemporain de Montréal (2015); and Tate Britain, London (2014). It has also been presented online by Panther Modern, Parallelograms, ANI GIF, 15Folds, Channel Normal, the Wrong – New Digital Art Biennial, Eternal Internet Brotherhood, and Cloaque.org.

The exhibition is curated by Helga Christoffersen, Assistant Curator.
www.newmuseum.org