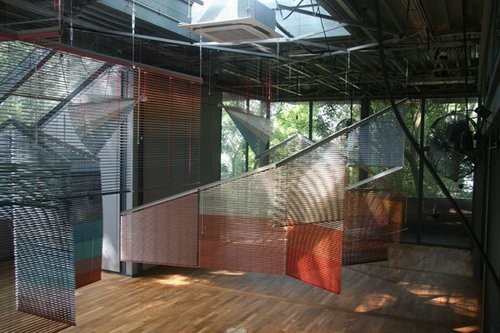 he New Museum will present the first New York solo exhibition by Haegue Yang (b. Seoul, 1971). One of the leading artists of her generation, Yang has participated in numerous exhibitions internationally, and represented South Korea at the 53rd Venice Biennial in 2009, but she has yet to exhibit in a New York museum. “Voice and Wind: Haegue Yang,” at the New Museum will feature the artist’s installation Series of Vulnerable Arrangements—Voice and Wind (2009)—a labyrinthine system of stacked venetian blinds, industrial fans, and scent atomizers that will transform the New Museum’s lobby gallery into an immersive experience.

Yang’s work is marked by a particular preoccupation with the coexistence of formalism and emotion, determination and meandering. She has created meditative, striking installations at the 2006 São Paulo Biennial, sala rekalde in Bilbao, and REDCAT in Los Angeles, in which man-made sensorial stimuli enhance an experience of space and time. For Yang’s installation at the New Museum, industrial fans placed within the gallery will generate wind at various intervals, altering both the stability of the blinds as suspended barriers and the movement of visitors through the space. Scent atomizers integrated in and around the system of blinds will infuse the installation with a subtle olfactory experience, calling upon the visitors’ subjectivity as a key element in the definition of the space. Flooded with natural light, Series of Vulnerable Arrangements—Voice and Wind (2009) will evoke shadows of places and experiences not physically present. As in her earlier works, Yang introduces electricity as an invisible connection between objects, people, and ideas, and as the source of artificial approximations of sensual experiences “that conjure other places, other people, comfort, distress, something familiar, perhaps something profoundly forgotten,” writes Eungie Joo, curator.

In Series of Vulnerable Arrangements—Voice and Wind, as in other related installations, Yang employs commercially-manufactured venetian blinds as a kind of imperfect spatial boundary, easily transgressed visually, aurally, and physically. For this installation, Yang chose a custom selection of uncategorizable colors and patterns that exist at the edge of taste. These functional decorations for the home defy rigid concepts of design or periodization to emphasize the nonaesthetics of the private sphere, “where the self is cared for and contemplated, and can be shared in a different way,” says Yang.

“Voice and Wind: Haegue Yang” is curated by Eungie Joo, Keith Haring Director and Curator of Education and Public Programs at the New Museum. Joo also served as Commissioner of the Korean Pavilion at the 53rd Venice Biennial in 2009 for the original presentation of this work in the exhibition “Condensation: Haegue Yang.”

Haegue Yang (b. Seoul, 1971) received her B.F.A. from Seoul National University, Fine Arts College in 1994, and her Meisterschüler from Städelschule, Frankfurt am Main, in 1999. Her work has been included in numerous international exhibitions such as the 2006 São Paulo Biennial; the Anyang Public Art Project 2007; the 55th Carnegie International, Pittsburgh; the 2008 Turin Triennial; “Asymmetric Equality,” REDCAT, Los Angeles; “Brave New Worlds,” Walker Art Center, Minneapolis; the 53rd Venice Biennial; and most recently “10,000 Lives,” the 8th Gwangju Biennial, and a solo exhibition at Artsonje Center, Seoul. In 2011, the artist will present a major solo exhibition at Kunsthaus Bregenz. Yang lives and works in Berlin and Seoul.
www.newmuseum.org