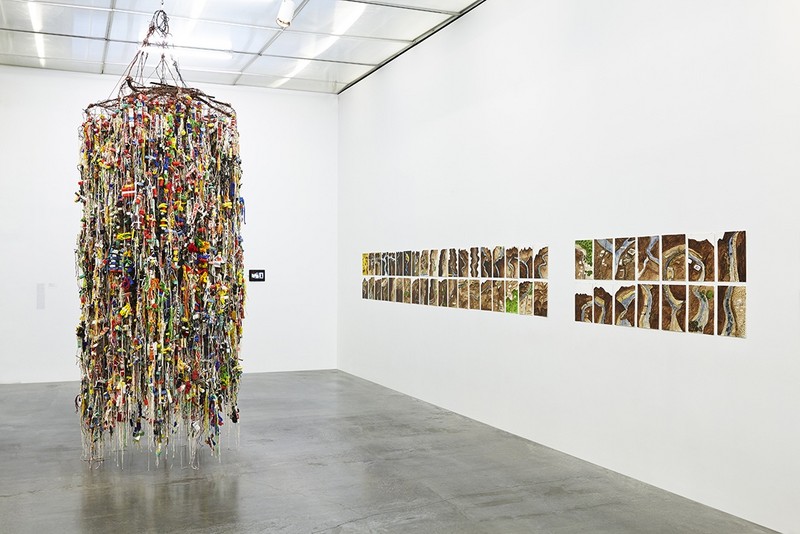 The New Museum presents “Here and Elsewhere,” a major exhibition of contemporary art from and about the Arab world.

The exhibition brings together more than forty-five artists from over fifteen countries, many of whom live and work internationally. In keeping with the New Museum’s dedication to showcasing the most engaging new art from around the globe, “Here and Elsewhere” is the most recent in a series of exhibitions that have introduced urgent questions and new aesthetics to US audiences.

“This exhibition continues the New Museum’s commitment to looking at art from beyond the confines familiar to the New York art world,” said Massimiliano Gioni, Associate Director and Director of Exhibitions. “‘Here and Elsewhere’ brings new works and new voices to our audiences, presenting many artists who are showing in New York for the first time.” Combining pivotal and under-recognized figures with younger and midcareer artists, “Here and Elsewhere” works against the notion of the Arab world as a homogenous or cohesive entity. Through the original and individualized practices of a multigenerational constellation of artists, the exhibition highlights works that often have conceptual or aesthetic references to the Arab world, yet also extend well beyond.

“Here and Elsewhere” is on view from July 16–September 28, 2014. See complete list of artists in addendum.

The exhibition borrows its title from a 1976 film-essay by French directors Jean-Luc Godard, Jean-Pierre Gorin, and Anne-Marie Miéville. Their film, Ici et ailleurs [Here and Elsewhere], was initially conceived as a pro-Palestinian documentary, but evolved into a complex reflection on the ethics of representation and the status of images as instruments of political consciousness.

Taking inspiration from Godard, Gorin, and Miéville’s film—which has had a strong impact on an entire generation of artists in various Arab countries—“Here and Elsewhere” pays particular attention to the position and role of the artist in the face of historical events. A poignant example of personal reportage can be found in the short videos produced and distributed by Abounaddara, a collective of self-taught filmmakers dispersed throughout Syria, as well as in Bouchra Khalili’s video portraits, which reveal the clandestine journeys of migrants seeking to enter Europe.

Through different methodologies, an unconventional form of lyrical documentary and personal reportage emerges in works in which the artist is vested with the responsibility of revising dominant historical narratives. For artists like Fouad Elkoury, whose photographs document everyday life in Beirut during and after its fifteen-year Civil War, images are able to relate the nuanced stories of uncertain times.

Artists such as Hrair Sarkissian, Lamia Joreige, and Hassan Sharif undertake experimental approaches to archival material, rewriting personal and collective traumas, and weaving fragments both real and imagined into their work. Sarkissian’s photos of public squares in Syrian cities depict sites similar to the one where, as a child, he witnessed a criminal execution one day in the early morning. Joreige undertakes an archaeology of Lebanon’s recent history in an ongoing work that presents a series of objects and individual testimonies that recall aspects of Lebanon’s various conflicts. Sharif, a pioneering conceptual artist in Dubai, works by accumulating surplus materials and found objects, but in contrast to the archaeological pursuits of other artists, his catalogues of manufactured goods reflect on globalized production and consumption. Ala Younis presents a visual essay, an exhibition within the exhibition, in which artworks, archival materials, and objects from popular culture are combined to analyze the representation of the Palestinian struggle within the historical context of Pan-Arabism.

For other artists, traditional mediums like painting, drawing, and sculpture record subtle and intimate shifts in awareness, Anna Boghiguian’s dense and meditative drawings follow her everyday urban experiences, and among the works included in the exhibition are some she created in Cairo during the 2011 revolution. The rough-hewn, figurative terracotta effigies of Simone Fattal appear as ancient artifacts, but simultaneously call attention to current events and relations of power.

A few artists included in the exhibition also use images as tools for self-discovery, chronicles of current events, or registers of personal histories. For the Syrian painter Marwan, many early works served as sites of expression and ruminations on the inner self through portraiture. Ziad Antar’s photographs made using expired film probe photography’s relationship to history, archives, and truthful documentation. Mazen Kerbaj filled his diary with energetic and expressive drawings while his hometown Beirut was under Israeli air strike in the summer of 2006.

A reflection on what is at stake in the act of representation characterizes many of the works in the exhibition, as many artists reconsider the task of witnessing and chronicling social and political changes. Artist, poet, essayist, and novelist Etel Adnan, who is also known for her practice of painting and weaving, presents her seventy-three-page manuscript The Arab Apocalypse. Regarded as one of the most important literary responses to the Lebanese Civil War, the text channels the energy of Symbolist and Surrealist poets to evoke the absurd brutality she witnessed beginning in the mid-1970s.

A number of pieces on view prompt a reflection on images as spaces of intimacy, such as the works of studio photographer Hashem El Madani, which through the research and efforts of artist Akram Zaatari, reveal the construction of identity at a time when studio photography flourished as a powerful and prolific site of individualized image-making. Other artists develop a critique of media representation and propaganda in their works, such as Rokni Haerizadeh’s whimsical drawings of political demonstrations executed on printouts of stills he has collected from YouTube videos of news broadcasts.

Following the critical discussions that have animated contemporary art in recent years, the exhibition does not propose a fixed definition of Arab art or a distinctive regional style. Just as the show’s title calls attention to multiple places and perspectives, “Here and Elsewhere” highlights specific cities and art scenes while emphasizing the importance of dialogues that extend internationally. Further, the exhibition illuminates similar insights and affinities as well as dramatic differences, revealing multiple social and aesthetic landscapes rather than a fictional sense of unity. Emerging from the works of a particularly strong and diverse group of artists are less the contours of an imagined geography—to paraphrase the words of Edward Said—than new critical attitudes toward art and images that encourage us to look “elsewhere” in order to understand our “here.”

“Here and Elsewhere” is accompanied by a fully illustrated catalogue coedited with Negar Azimi and Kaelen Wilson-Goldie of Bidoun magazine, and featuring roundtable discussions with artists as well as critical essays by scholars and critics.