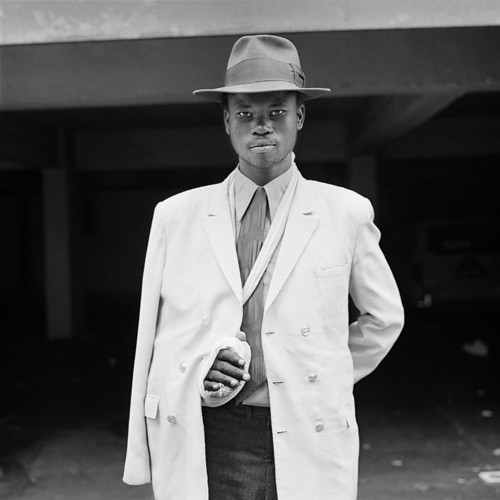 Over the last fifty years, David Goldblatt has documented the complexities and contradictions of South African society. His photographs capture the social and moral value systems that governed the tumultuous history of his country’s segregationist policies and continue to influence its changing political landscape. Goldblatt began photographing professionally in the early 1960s, focusing on the effects of the National Party’s legislation of apartheid. The son of Jewish Lithuanian parents who fled to South Africa to escape religious persecution, Goldblatt was forced into a peculiar situation, being at once a white man in a racially segregated society and a member of a religious minority with a sense of otherness. He used the camera to capture the true face of apartheid as his way of coping with horrifying realities and making his voice heard. Goldblatt did not try to capture iconic images, nor did he use the camera as a tool to entice revolution through propaganda. Instead, he reveals a much more complex portrait, including the intricacies and banalities of daily life in all aspects of society. Whether showing the plight of black communities, the culture of the Afrikaner nationalists, the comfort of white suburbanites, or the architectural landscape, Goldblatt’s photographs are an intimate portrayal of a culture plagued by injustice.
In Goldblatt’s images we can see a universal sense of people’s aspirations, making do with their abnormal situation in as normal a way as possible. People go about their daily lives, trying to preserve a sense of decency amid terrible hardship. Goldblatt points out a connection between people (including himself) and the environment, and how the environment reflects the ideologies that built it. His photographs convey a sense of vulnerability as well as dignity. Goldblatt is very much a part of the culture that he is analyzing. Unlike the tradition of many documentary photographers who capture the “decisive moment,” Goldblatt’s interest lies in the routine existence of a particular time in history.
Goldblatt continues to explore the consciousness of South African society today. He looks at the condition of race relations after the end of apartheid while also tackling other contemporary issues, such as the influence of the AIDS epidemic and the excesses of consumption. For his “Intersections Intersected” series, Goldblatt looks at the relationship between the past and present by pairing his older black-and-white images with his more recent color work. Here we may notice photography’s unique association with time: how things were, how things are, and also that the effects of apartheid run deep. It will take much more time to heal the wounds of a society that was divided for so long. Yet, there is a possibility for hope, recognition of how much has changed politically in the time between the two images, and a potential optimism for the future. Goldblatt’s work is a dynamic and multilayered view of life in South Africa, and he continues to reveal that society’s progress and incongruities.