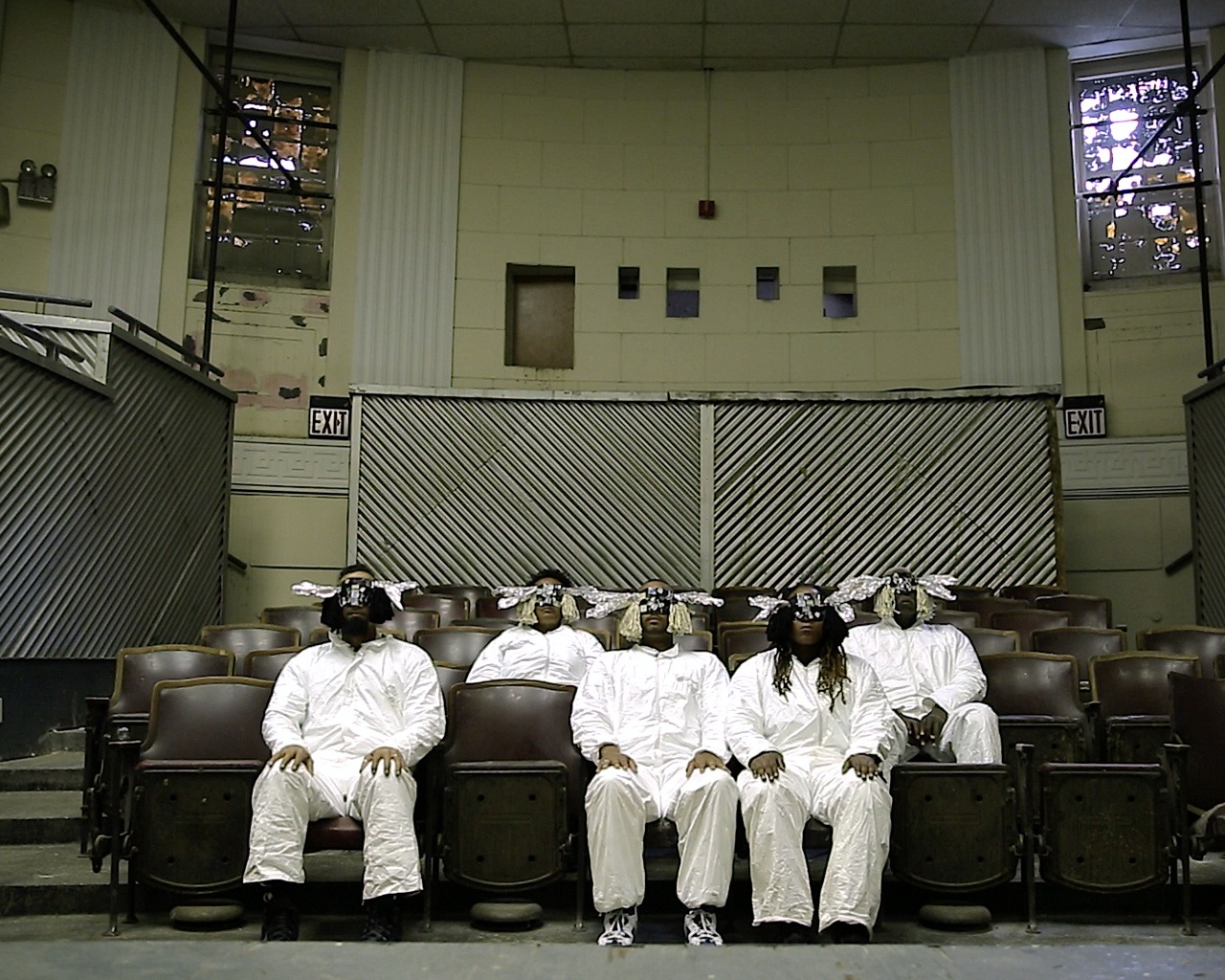 Mirror/Echo/Tilt is a performance and pedagogical project created by artists Melanie Crean, Shaun Leonardo, and Sable Elyse Smith to examine the language and gestures used to describe experiences of arrest and incarceration.

Culminating a four-year collaboration between the artists, the exhibition premieres a multichannel video installation that depicts performances they developed with participants in intensive workshops and filmed largely in decommissioned prisons, empty courthouses, and other psychically charged architectural spaces in New York City.

Drawing on principles from speculative fiction, somatic movement, cognitive psychology, and radical theater, the artists and participants use visual storytelling to reframe their experiences and open up new possibilities for resisting systems of control. Fragmented, doubled, and slowed movements defamiliarize mainstream narratives about carcerality. The project’s title, Mirror/Echo/Tilt, is inspired by Miguel de Cervantes’s famous novel Don Quixote (1605–15), which was written from prison. Much like Cervantes’s novel, Mirror/Echo/Tilt complicates the boundary between fiction and reality, and explores how radically shifting the way we tell stories can challenge dominant power structures.

The project also takes the form of a living curriculum practiced with court-involved youth, formerly incarcerated adults, and individuals otherwise vulnerable to the justice system. The curriculum focuses on undoing the language around culturally embedded conceptions of criminality and will serve as an open resource that lives beyond the artists and the exhibition.

Mirror/Echo/Tilt is the New Museum’s fourth annual Summer Art and Social Justice residency and exhibition. It features private workshops for community partners, public forums and readings, and a resource room with visions for justice contributed by visitors and facilitated by the New Museum Teen Apprentice Program, a summer youth employment program.

This exhibition is curated by Emily Mello, Associate Director of Education, and Sara O’Keeffe, Associate Curator.

Melanie Crean (b. 1968, Waterbury CT) is an artist, educator, and filmmaker. Her research-based practice focuses on how new forms of narrative and interaction can be used to equitably shift relationships of power and mitigate the impact that social systems of control have on people and their surrounding environment. She was Research Artist at Recess Assembly, New York, in 2017. Her current work includes No Such Place as America, supported by A Blade of Grass and created in collaboration with young equestrians from Ebony Horsewomen and local law enforcement in Hartford, CT, as well as a commission with Artspace and the Yale University archives, commenting on the current state of the criminal justice system in the United States, fifty years after the trials of the New Haven Nine. Crean is an Associate Professor of Art, Media and Technology at Parsons School of Design.

Shaun Leonardo (b. 1979, Queens, NY) is a multi-disciplinary artist whose work negotiates societal expectations of manhood, namely definitions surrounding black and brown masculinities, along with their notions of achievement, collective identity, and the experience of failure. His performance practice is participatory in nature and invested in a process of embodiment, promoting the political potential of attention and discomfort as means to disrupt meaning and shift perspective. Leonardo’s work has recently been presented at the Guggenheim Museum, New York (2018); Contemporary Arts Museum Houston (2018, 2013); High Line, New York (2017); Recess Assembly, New York (2017); Yerba Buena Center for the Arts, San Francisco (2015); Brooklyn Museum, New York (2014); and Walker Art Center, Minneapolis (2014). He is currently a School of Art Visiting Fellow at Pratt Institute, and lives in Brooklyn.