Museum as Hub: Be(com)ing Dutch at a Distance 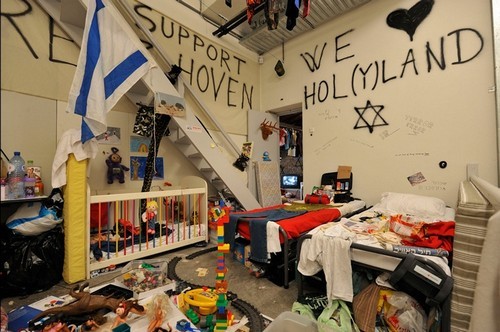 “Museum as Hub: Be(com)ing Dutch at a Distance” is a large project developed over two years both inside and outside the Van Abbemuseum in Eindhoven, the Netherlands. Consisting of debates, reading groups, artist's projects, exhibitions, and residencies, it interrogated various forms of collective participation and production.
As questions of cultural identity and normative “national” values become ever more of an issue in political and cultural debate, Be(com)ing Dutch asks whether art can offer alternative examples of thinking about how we can live together today. Be(com)ing Dutch seeks to put our ideas of cultural identity under pressure and examine the process of inclusion and exclusion in the world today. Since 2006, when the Van Abbemuseum was awarded a prize that made it possible to turn our existing ideas into reality, the discussion in the Netherlands about who we are, where we come from, where we are heading, and what are our norms and values in a globalizing world has become even more topical and urgent.
Like the Be(com)ing Dutch exhibition in Eindhoven, Be(com)ing Dutch at the New Museum is guided by three broad directional themes: Imagined Past, Imagined Present, and Imagined Future. Michael Blum’s project, Exodus 2048, installed in the Museum as Hub space for the duration of the exhibition, represents an Imagined Future, where the museum itself serves as a temporary camp for Israeli refugees. The Imagined Present is represented in Lidwien van de Ven’s Freedom of Expression, originally an installation at the Van Abbemuseum and here re-created by the reprinting of her work Brussels, 14/02/2008 (Hirsi Ali) as an artist-page insert in the Museum as Hub newspaper and a special presentation of her video Freedom of Expression where the artist and guests will hold a talk considering the issues of Islamophobia, new right-wing thinking in Europe, and the politics of citizenship and immigration. This special presentation coincides with the Be(com)ing Dutch project’s book launch during the closing weekend of the exhibition at the New Museum.
Finally, screenings of Johan van der Keuken’s film I love $ throughout the exhibition period reference the Imagined Past: the film shows an almost prophetic and still-topical treatment of global capitalism.
For more information about Be(com)ing Dutch, please visit becomingdutch.com.
Organized by Annie Fletcher, Exhibitions Curator, and Charles Esche, Director, Van Abbemuseum, Eindhoven.
www.newmuseum.org