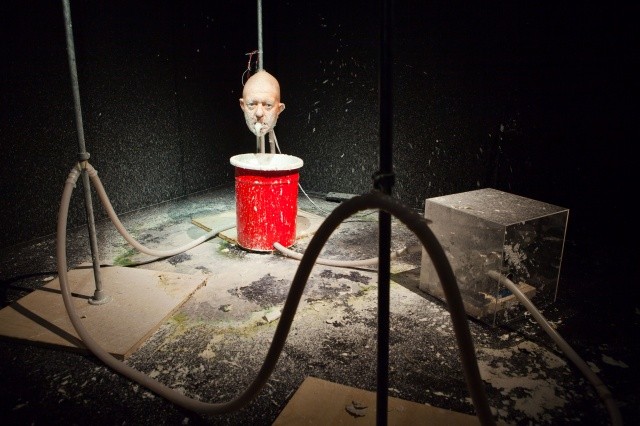 Conflating narrative tropes and methods from television sitcoms, theater, science fiction, mythology, and anthropology, Mellors writes the scripts for each of his projects, which he also directs, edits, and produces. His raucous films feature a book-eating creature named “The Object” who literally digests a family’s library in Ourhouse (2010–ongoing); a Neanderthal in perpetual free-fall over the San Joaquin Valley in Neanderthal Container, (2014); and two messianic beings, in the form of a cardboard box and a giant egg, who attempt to make sense of a culture that they created millions of years prior in The Aalto Natives (2017, in collaboration with Erkka Nissinen, originally conceived for the Finnish Pavilion at the Venice Biennale). For his exhibition at the New Museum, Mellors will create a new environment including video projection and animatronic sculpture.

”Nathaniel Mellors: Progressive Rocks” is curated by Margot Norton, Curator, and will be on view in the New Museum’s recently inaugurated South Galleries, a space designated for premiering new productions at the Museum. The South Galleries preserve the character of the building’s loft spaces, where many artists historically worked and exhibited.