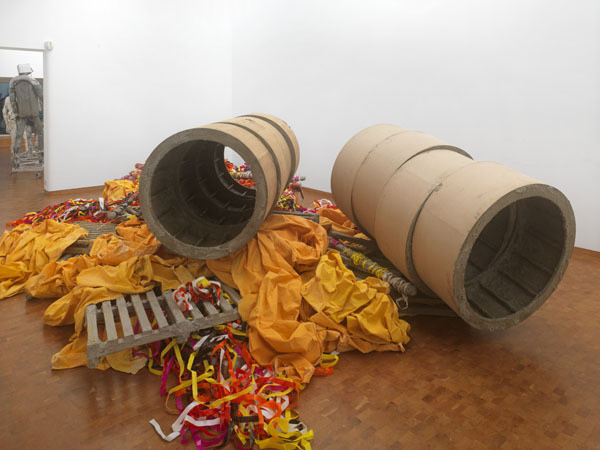 “Phyllida Barlow: siege” is the first New York solo exhibition of the work of British sculptor. For her New Museum presentation, Barlow will create a new, site-specific sculptural installation in the Museum’s fourth floor gallery. This exhibition is part of a series focusing on a single project or body of work within an artist’s larger practice. The series began last May with presentations by Apichatpong Weerasethakul and Gustav Metzger.

Barlow has been a seminal influence on British sculpture for the past forty years, having taught a generation of notable British artists. She began making work in the early 1970s, breaking away from earlier British sculpture exemplified by the formal abstractions of artists such as Anthony Caro. Inspired by American sculptors like Eva Hesse, Barlow embraced a mode of working that drew stronger ties between the sculpture and the artist’s body. She also took on a broader and more experimental approach to the materials she manipulates. Her works consist of disparate substances such as concrete, felt, wooden pallets, polystyrene, and fabric, often within the same work. These materials are a reflection of the urban environment in which she works and are often sourced directly from the streets. Barlow’s sculpture takes on an ephemeral, contingent quality as works assembled on site will often be broken down after an exhibition and recycled into future work.

Since the beginning of her career, Barlow’s sculptures have been appreciated for their playful formalism and the relationship they have to the built environment—often inspired by objects that direct or impede our movement through space. Barriers, scaffolding, and security fences are reinterpreted into rough-hewn constructions with exuberantly painted surfaces. Assembling her sculptures quickly and intuitively, they become distant memories of objects rather than faithful reconstructions. In her installations, Barlow scales her work to fully inhabit and transform a given architectural space. Ranging from intimately scaled objects occupying corners and corridors, to works that take on an imposing and overwhelming scale, her installations challenge and parody the heroic monumentalism of her predecessors. Barlow reveals that sculpture can accurately capture the joyfulness, absurdity, and transience of life.

Phyllida Barlow was born in 1944 in Newcastle-upon-Tyne, England. She currently lives and works in London, England. Barlow attended Chelsea School of Art, London, and then the Slade School of Fine Art, London, graduating in 1966. She taught sculpture in London art schools for over forty years, retiring in 2008. She has had solo exhibitions at venues including the Henry Moore Foundation, Leeds, England (1995), Baltic Centre for Contemporary Art, Gateshead, England (2004), BAWAG Contemporary, Vienna, Austria (2010), and the Kunstverein Nürnberg, Germany (2011). Barlow has participated in group exhibitions at the Kunstmuseum Basel, Switzerland, Bergen Kunsthall, Norway, Haus der Kunst, Munich, Germany, and with Nairy Baghramian at the Serpentine Gallery, London. She is the recipient of the 2012 Aachen prize and will have an exhibition at the Ludwig Forum, Aachen, Germany, also in May 2012.