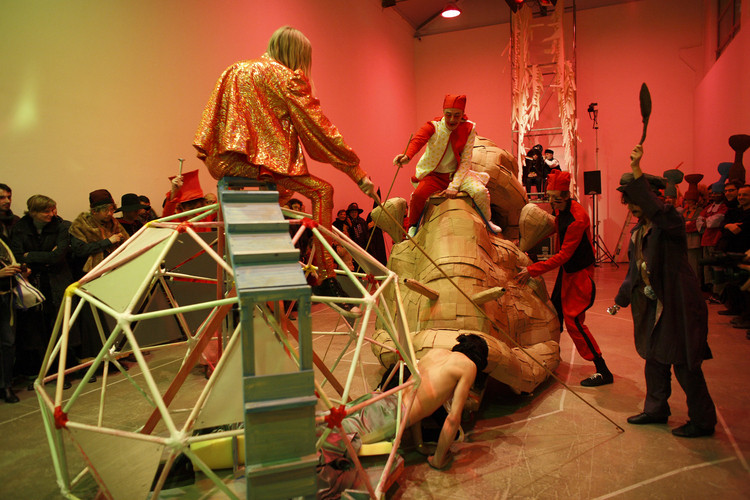 This fall, the New Museum will present a new installation and series of performances by Spartacus Chetwynd. Taking place in a new exhibition space at 231 Bowery as part of the Studio 231 program, this will be the first American museum exhibition by the London-based artist. Over the past ten years, Chetwynd and her traveling band of amateur actors have realized a number of exhibitions and performances throughout Europe. Utilizing handmade costumes and sets, her work draws on a wide range of influences from film and television, literature, art history, and philosophy. As in her previous projects, her installation at the New Museum will be conceived specifically for the site and will be activated by performances and direct interaction with the viewer for the duration of the exhibition.

Chetwynd uses a variety of historical theatrical forms, from Brechtian drama to puppet shows, often within the same performance. The result is an experience that is accessible, humorous, and disorienting. Chetwynd initially studied anthropology and uses the idea of bricolage as both a physical practice and the organizing principle to bring together the disparate images and characters within her work. The carnivalesque world she creates is one in which figures like Emperor Nero, Mae West, Karl Marx, and Jabba the Hutt can comfortably—if not peacefully—coexist. The informality of Chetwynd’s performances and the effortless mix of high and low sources make them remarkably democratic spaces for exploring ideas about history, class, and contemporary culture. For instance, her recent exhibition at Sadie Coles HQ , London, titled “Odd Man Out,” invited viewers to enter a carefully choreographed world in which every decision they made had a range of political consequences.

A number of Chetwynd’s projects have focused on the local environment outside of the gallery space and have embraced the everyday theater of the street. In her 2005 performance The Walk to Dover, she retraced the journey of Charles Dickens’s titular character David Copperfield on a seven-day expedition from London to Dover in which she and her merry band of travelers suffered both hardships and joyous adventures as they expanded the scope of their theater to include the contemporary English countryside. Her project for the New Museum will continue her attempt to create new collective narratives from diverse strands of culture.
www.newmuseum.org