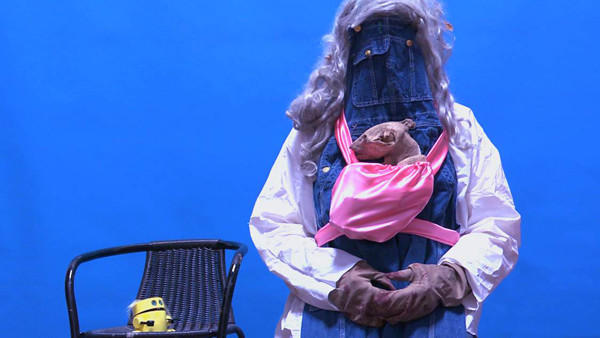 Stanya Kahn’s videos offer glimpses into alternate worlds populated by bizarre characters, mummified animals, natural forces, and primal impulses. Happy Song for You (2011), made with legendary artist Llyn Foulkes, demonstrates Kahn’s unique approach to storytelling in which humor and absurdity function as central forces. Featuring an original song written and performed by Foulkes, the video is set to a carefully crafted soundtrack, a signature element of Kahn’s work. Happy Song for You will be exhibited alongside a selection of ink-on-paper drawings that extend Kahn's comedic writing into the graphic practice of cartooning.

Stanya Kahn (b. 1968) lives and works in Los Angeles. Her videos were recently featured in “Two Schools of Cool” and the California Biennial, both presented at the Orange County Museum of Art, Newport Beach, CA. Her video It’s Cool, I’m Good (2010) won the jury prize for short fiction at the Migrating Forms Festival in New York City in 2010 and she recently received a 2012 Guggenheim Fellowship. She will have a solo show at Cornerhouse, Manchester, UK, in June 2012. This is Kahn’s first New York solo museum presentation.

This presentation is organized by Jenny Moore, Assistant Curator, and is part of the Museum’s ‘Stowaways’ series—a constellation of episodic projects and spontaneous interventions in spaces throughout the New Muse
www.newmuseum.org