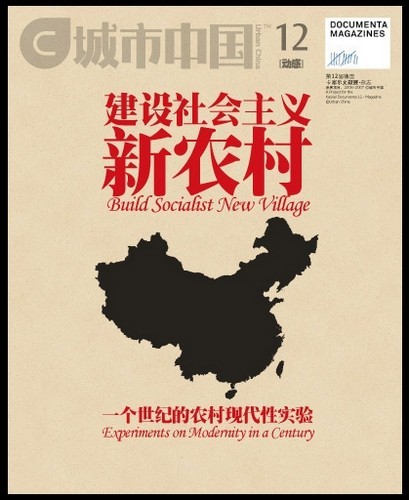 “Urban China: Informal Cities” is a multifaceted exploration and physical manifestation of the groundbreaking magazine Urban China. Founded in 2005, Urban China is the only magazine devoted to issues of urbanism published in and about China. In addition to offices in Beijing, Shanghai, and Guangzhou, the magazine has a network of correspondents and collaborators around the world who work under the guidance of its Editor-in-Chief, Jiang Jun, to meld elements of photojournalism, geography, architecture, graphic design, anthropology, statistics, and historical research together in an investigation of how cities, particularly rapidly developing cities, function today. Urban China investigates these complex issues with a unique sensibility that infuses serious, multidisciplinary data collection and analysis with a genuine sense of wide-eyed awe, channeling data streams of seemingly unrelated information into digestible narrative webs. Each boldly designed, graphically rich issue of Urban China is dedicated to exploring a single, rigorously researched theme, such as “Chinatown,” “Migrating China,” and “Urban Images and Text.” In articles, interviews, photographs, and visually compelling diagrams, each issue’s pages brim with an exuberant air of possibility mixed with melancholic reflection. Urban China expresses a joy in analyzing the world anew, finding fresh ways to map it, and in that mapping, showing us the unheralded and unknown connections and relations that shape the way cities and lives are continually made and remade. For “Urban China: Informal Cities”—the magazine’s first exhibition in the United States—Urban China has extended its visionary language of display from the pages of the magazines into the three-dimensional space of the gallery. Combining a large-scale wall graphic, objects, a retrospective of past issues of the magazine, a dynamic user-navigable database of images, and a series of discussions, lectures, and class meetings that will take place in this exhibition space,
“Urban China: Informal Cities” serves as an introduction to the methods and multiplicity of the magazine’s practices, as well as an extended exploration of how “informalism” influences the shape of cities in China and beyond.
Urban China uses the term “informalism” as a catchall term that combines notions of the informal, or underground, economy with popular, vernacular modes of remaking objects, buildings, and lives. The idea of the informal is especially consequential in light of the rigorous order with which Chinese cities have historically been planned and policed. Chinese cities are, and have always been, highly ordered; from the gatehouse structure at the core of ancient city plans to the volumes of bureaucracy necessary to engage in many everyday tasks today, Chinese cities are a study in control of space, people, and economies. For Urban China informalism is a way for individuals to exert direct agency over the basic facts of their daily lives and remix their immediate reality. As such, the gallery is replete with graphic treatments, objects, and remnants, all of which combine to explain how informal systems—spatial, economic, and utilitarian—act to subvert the highly structured nature of urban spaces in China and beyond.
Like the magazine itself, this project is the culmination of research translated into a riot of interrelated statistics, graphics, keywords, notions, photographs, discussions, spaces, and stories. Urban China’s consistent and revelatory engagement with the world around them, and the singular manner with which they see and describe the details of that world, both mundane and remarkable, has earned the magazine recognition as one of the most vibrant intellectual projects anywhere in the world: one that is constantly engaged in finding ways of making the invisible seeable, and of changing, and making clearer, the way that we all are able to view and make sense of the world around us.
This exhibition is curated by Benjamin Godsill, Curatorial Associate, New Museum.
www.newmuseum.org
Edit New Museum
Jasmina Metwaly & Yazan Khalili
KW
Berlin
Jeremiah Day
Badischer Kunstverein
Karlsruhe
Sheela Gowda
Lenbachhaus
Munich
Forrest Bess
Fridericianum
Kassel
Olafur Eliasson
MOT
Tokyo
Kornelia Dzikowska
Ujazdowski Castle
Warsaw
Jakob Lena Knebl
Lentos Kunstmuseum
Linz
Biennale of Sydney 2020
Sydney
Peter Saul
New Museum
New York
Paul McCarthy
Hammer Museum
Los Angeles
Walid Raad
Moderna Museet
Stockholm
Ulla von Brandenburg
Palais de Tokyo
Paris
Ree Morton
ICA LA
Los Angeles
Bergen Assembly 2019
Bergen
Steirischer Herbst 2019
Graz
Whitney Biennial 2019
New York
58. Biennale di Venezia
Venice
Urbane Künste Ruhr 2019
Bochum
33. São Paulo Biennial
Sao Paulo
6. Athens Biennale
Athens
Manifesta 12 Palermo
Palermo
Riga Biennial 2018
Riga
Liverpool Biennial 2018
Liverpool
Steirischer Herbst 2018
Graz
10th Berlin Biennale 2018
Berlin
Made in L.A. 2018
Los Angeles
Biennale of Sydney 2018
Sydney
New Museum Triennial
New York
Odyssey
Möhnesee
Skulptur Projekte Münster
Münster
Documenta 14 Kassel
Kassel