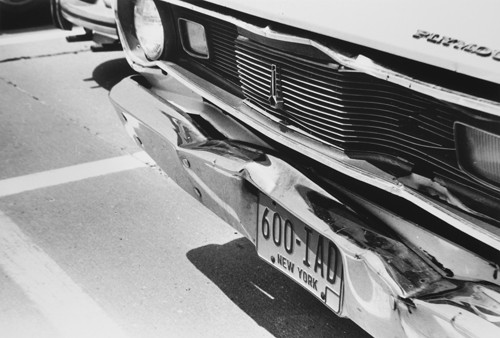 Protest culture, TV entertainment, game shows, Court TV, pop, the monumental North American landscapes, biker gangs, affirmative action and latent racism, the Western as a film genre and the invasions of Iraq and Afghanistan, tough guys, cowboys and rodeo: The exhibition AMERIKANA brings together works by eight New York artists addressing typical, even "all-American" topics. Over the course of decades the history of United States society has been mythologized. The NGBK has decided to take a closer look at the status quo of the American legend. The topoi under scrutiny impressed a lasting and intensive stamp on western culture and its countercultures. They are part of a progressive Americanization taking place outside the USA and also determine the self image of U.S. Americans.

The artists challenge traditional viewpoints. They shift the perspective or exaggerate certain genres, thus promoting a sense of skepticism towards the mythical excesses of the sometimes bizarre American way of life. They make no exceptions for the apparent antagonists, the underground or subcultures.
The exhibition takes a skeptical look at the ideals of liberty and independence as expressed in their normalized, perverted and grotesque forms and places them in relation to the glittering yet depressing status quo. The artists’ gaze is attentive, critical, deconstructive and aggressive, and at times humorous. It takes the pathos presented and works with it, not entirely destroying its baroque character, its many layers, its empathy and poetry. The dissociation is carried out rationally and sober and at the same time fancifully.

The exhibition is held together by one of the few photographic works produced by Robert Gober, "1978 -- 2000". He conceived it for the 2001 Venice Biennale. At that time it was only made public in the form of a brochure handed out to interested visitors to the American pavilion. It deals with a road-trip in 1978 which led from Manhattan to Jones Beach on the Atlantic and which Gober repeated once more in the year 2000 (the photos had been in his apartment for over 20 years / the negatives are lost / a poor quality contact sheet was his only starting point). He assembled the old and new photos to form a sobering pictorial essay, as impressive as it is apparently casual, a reflection on civilization, on the everyday and on memory.
Robert Gober’s photo series evokes the road movie genre. Automobile culture, consumption, fragile liberty, pictures of a partly disconnected and partly extremely concrete desolate world provide the frame for two articles about the murder of homosexuals and the ultraconservative attitudes which incite people to such deeds. It is a reflection about strangeness and alienation, proximity and distance, and the half-life of civilization’s non-degradable refuse and ineradicable prejudices.

"Road movie" is the term used for a film genre which arose in the United States in the 1960s. The storylines of road movies played out on highways and byways, the journey becoming a metaphor for the protagonists’ search for liberty and identity. The narrative effect of pop, rock and country music songs is often used in road movies.

In her video installation "Arabesque" (2004) Mary Lucier creates a kaleidoscopic vision of bull riding, compressing and duplicating events at the rodeo in images which collapse into one another and within themselves. It is accompanied by a frame-precise digitization of a country song by George Strait. „Arabesque“ is “ is not only a playful study on cowboys and rodeo, it is a swan song for a male cult and a tough but intact macho world. The piece originally formed part of the multi-channel video installation “The Plains of Sweet Regret“, dealing with the dramatic changes taking place in the Mid-West, where it is barely possible to uphold rural life.

In "Pitch (for a Motorcycle Film): Sets, Cast, Props“, 2005, Martin Beck took a biker rally in the Californian desert as an opportunity to make a pitch for a film. He is also interested in the format of a convincing outline; how briefly can an idea be portrayed if it is to spark interest and in the end be produced.

In his video installation "Cheshire" (2008) Sanford Biggers asked Afro-Americans to climb trees, thus alluding humorously if bitterly to the pseudo-integration of blacks and to the racism which still latently exists. " He is as invisible as the professional Black man is in the mass media today – but I am also thinking about Black men hanging out in trees, as opposed to being hung from them.“ The various scenes are linked to one another by an extremely destorted version of Billie Holiday’s “Strange Fruit“(performed by Imani Uzuri).

In her cartoon "Destiny Manifesto" (2006) Martha Colburn blends the world of cowboys and Indians and pioneers in the wild west with the US invasions in Afghanistan and Iraq. Her nightmare like spectacle of images interweaves Hollywood and settler clichés, cavalry against redskins, with the force and the brutality of current wars and stereotyped patterns of threats.

John Miller’s paintings affirm the platitudes of American culture - Democracy, Entertainment, the vast and rugged Nature of the country and the associated sense of patriotism. He stages them in a shrill and evil manner, as being the detritus of consumer culture. Some titles of his paintings are drawn from to reviews of his exhibitions and their headings, such as The Fashionable Excess Wears Thin (1995).

Donald Moffett calls his six elegant silver-colored paintings with intricately worked surfaces "Hippie Shit" (2005). Harmonica songs make for a melancholy atmosphere around these cool areas, whose dimensions and shapes are reminiscent of large household appliances in an electrical goods store. Things homemade and individually characterized meet consumer culture, icy coldness meets strangely standardized individuality. The loving design of the paint layer as thick as a finger contrasts with the stackable form taken by the goods. Moffett scrutinizes cunningly and cynically the relationships and the value of contemporary art as an expression of high culture, progress and originality.

Paul Pfeiffer’s two-channel video installation recalls to mind the prosecution of the recently deceased greatest pop star of all time, Michael Jackson. In „Live from Neverland“, 2006 one of the most widely seen television documentaries of recent years is re-expressed more bluntly. Pfeiffer has filtered out those eleven minutes of the television report “Living with Michael Jackson“, watched by twenty-seven million Americans, in which Michael Jackson hurt and resentful speaks of having shared his bed with a number of children at his “Neverland“ ranch. On one monitor Pfeiffer shows a silent version of Jackson’s speech whilst a simultaneous wall size video projection shows the speech accompanied by a chorus. The Broadway version of the plea made by a pop-star suspected of child abuse to a media saturated and hystericized society causes the observer to pause arrested by the ambivalence.

The exhibition title is borrowed in slight variation from the groundbreaking exhibition by the artists collective “Group Material” which was shown as part of the Whitney Biennial 1985 at the Whitney Museum of American Art under the title “Americana“. It was a kind of counter exhibition which united objects and works that had no place within the structure of the Biennial and a museum of contemporary art. Agitprop, traditional arts, feminist art and art by black artists, folk art, outsider art, everyday ornaments, wallpaper and consumption goods were exhibited in a dense side by side, including works by Barbara Kruger, Leon Golub, Sherrie Levine, John Miller and Claes Oldenburg as well as about 45 other artists. A prominent place was given to two large household appliances, a washing machine and a dryer, which in a succinct way brought the everyday into the world of the museum.

For more than 20 years the RealismusStudio has repeatedly initiated discussions of contemporary, critical art from the USA. As in the case of the "Steppenwolf” exhibition in the summer of this year, in this RealismusStudio exhibition too the focus of interest is on the stylization of social behavior, on cliché as well as the creation of stereotypes and on how these are used as contemporary artistic methods, in order to say something about the present condition of the world.
www.ngbk.de