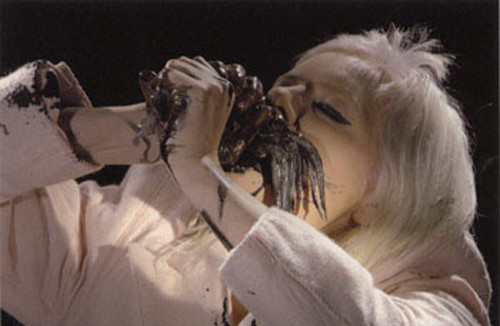 Artists: Eija-Liisa Ahtila (FI), Catherine Bell (AU), Marcus Coates (GB), Kathy High (US), John Isaacs (GB/DE), Vitaly Komar and Alexander Melamid (US/RU), Angela Köntje and Peter Frey (DE), Daniel Lee (TW/US), Jo Longhurst (GB), Reiner Maria Matysik (DE), Aurelia Mihai (RO/DE), Patricia Piccinini (AU), Iris Schieferstein (DE), Deborah Sengl (AT), Jana Sterbak (CA).
The exhibition Becoming-Animal, Becoming-Human is concerned with the processes of dissolution and becoming of animal and human identities and thus also with new ways of looking at both animals and humans. It takes the idea of becoming-animal formulated by Deleuze and Guattari in “A Thousand Plateaus” as a starting point, which the curators however then expand and reinterpret.
The artistic positions in the exhibition span a range of media covering sculpture and drawings, photography and video installations as well as assemblage and performance.
On the one hand the exhibition brings the ideas expressed by Deleuze and Guattari to fruition of a quite particular kind when it attempts to answer the question, What does becoming animal look like? by presenting artworks to exemplify this. On the other, it also includes a second focus, presenting works addressing a certain “becoming-human” on the part of animals and attributing quasi-human qualities to animals in order to question whether these qualities are in fact exclusively human.
In one example, an evolutionary process from fish, reptile and ape to a human being is shown in fast-motion, in order to demonstrate that the boundaries between these living beings are fluid (Daniel Lee); another allows one to experience the transformation from predator to prey within an animal body (Deborah Sengl); yet another presents transgenic beings who have left unknown processes of becoming behind them (Kathy High). Stalled processes of becoming and transformation are also to be found in the work of Patricia Piccinini. By contrast, Jana Sterbak and Jo Longhurst allow us to slip into a dog’s pelt and thus to see through its eyes. Aurelia Mihai shows us a shamanistic bear-transformation of young people as a traditional way of temporarily trying out animal identities. Eija-Liisa Ahtila and Marcus Coates imitate the body language respectively the acoustic forms of expression of animals; Catherine Bell exchanges bodily fluids with animals.
These positions ask, Where does the animal body end and where does the human body begin? – without presenting clear-cut answers.
Cooperations:
26.4. - 21.6.2009, opening 26.4., 11.30 h: Becoming-Animal Becoming-Human in cooperation with the exhibition Tierperspektiven at the Georg-Kolbe-Museum (GKM) (Sensburger Allee 25, 14055 Berlin, www.georg-kolbe-museum.de).
29.5. - 28.6.2009, opening 29.5, 19 h: Part 2 of Tierperspektiven can be seen at Projektraum Souterrain (Sammlung Hoffmann) (Sophie-Gips-Höfe, Sophienstraße 21, 10178 Berlin, www.souterrain-berlin.de).
20.-28. 5.: Arsenal – Institute for Film and Video Art, will be showing a thematic film programme (Potsdamer Straße 2, 10785 Berlin, www.arsenal-berlin.de).
A catalogue will be published to accompany the exhibition, including translations of two key texts on the exhibition’s theme: Donna Haraway’s When Species Meet and Steve Baker’s What does becoming-animal look like?
An exhibition by the NGBK project group: Jessica Ullrich, Kassandra Nakas, Friedrich Weltzien, Antonia Ulrich, Séverine Marguin, Heike Fuhlbrügge.
The exhibition Becoming-Animal, Becoming-Human is funded by Stiftung deutsche Klassenlotterie Berlin.
This project has been assisted by the Australian government’s arts funding and advisory body the Australian Council for the Arts.
We are grateful for the kind support provided by the Québec Government Office, the Arts Council Collection, Southbank Centre, London and Deutsche Gesellschaft für Ästhetik e.V.
Media partner: Kunstmagazin Berlin
www.ngbk.de