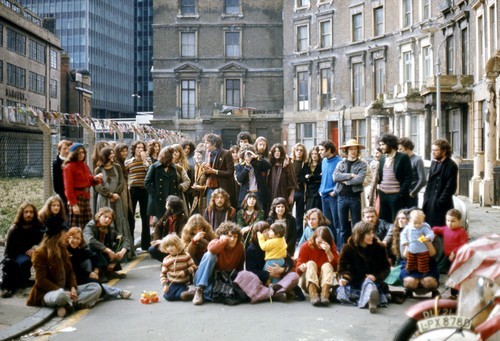 The exhibition focuses on the political culture of the 1970s in London and the UK. Against the backdrop of economic and political crisis (decline) a vital, politicized art scene developed, which found a temporary home in empty properties that had been given a new lease of life by over 30,000 squatters. It created art and film collectives, which actively intervened in property speculation, the escalation of the conflict in Northern Ireland and the scale of industrial disputes, and the emergence of Gay Liberation. The development lasted until the Falklands War and the failed Miners' Strike in the early 1980’s consolidated the forces of Neo Liberalism, and the era of radical London ended.

Over a decade, new workshops, performance spaces and studios came into being in the squatted factories and warehouses, in which major writers and artists such as Jon Savage and Derek Jarman began their careers. The radicalization of the mostly young activists was founded on the belief that there was no turning back. The multiplicity of political visions came from a desire to make fundamental changes, to try new alternatives and to think in new ways.

The exhibition highlights the potential that can arise from a crisis, it illuminates the possibilities and limitations of radicalization and brings to light, through installations, films, photographs, posters and objects, a London that is, at least in Germany, until now largely unknown.
Artists: Jo Spence, Stephen Willats, Jon Savage, Derek Jarman and others

Catalogue and DVD, in German and English.
www.ngbk.de