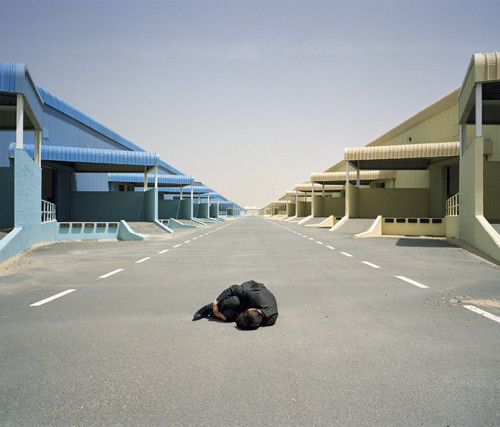 about the territorial isolation and social seclusion in 21st century cities

The exhibition ISLANDS+GHETTOS would like to draw attention to the strategies of territorial isolation and social seclusion in 21st century cities. In this context, Dubai and Caracas with their interchanging areas of poverty and wealth are exemplary for the tendencies of urban segregation. The group show, gathering 34 artists and 24 works, aims to point out that polarization, urban demarcations and partitions increasingly also are becoming relevant for European cities, likewise for Berlin.
Many of the participating artists have produced new works dealing with the South-American metropolises or the cities around the Persian Gulf. The large format photographs by Venezuelan artist Alexander Apostol, for example, depict how the almost utopian promises made by architects during the boom of the oil town Caracas have turned into closed off, windowless architecture, suggesting that strangers are enemies. The Berlin based artists Alice Creischer and Andreas Siekmann have extended their project “Atlas (Spaces in Subjunctive)” from 2003, exemplifying the economic situation within Dubai.
During the exhibition, an accompanying program will invite the visitor to experience the theoretic knowledge also against the background of Berlin.