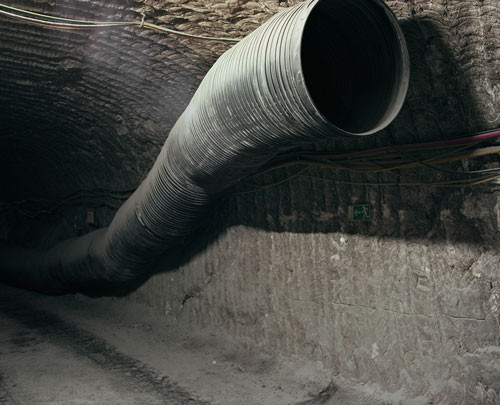 The contributions of the show examine differently defined “zones” in an experimental way, dealing with themes such as ecology und the environment, technology and nuclear power, politics, pop culture, and urban development. What the works have in common is the aspect that they all explore: the ambivalence of mankind’s handling of disastrous events and their repercussions.

The most important content-related starting point and point of reference for the organisers of the show is a film from 1979 that in a futuristic manner describes the journey through a “zone”: In Andrej Tarkowskij’s film of the same name, the figure of the Stalker leads a writer and a scientist unauthorized into the “zone”, a restricted area sealed off by the military. With his intuition and experience, he is able to make his way through the Arcadian landscape of ruins filled with mysteries and mortal dangers.
Shot seven years before the nuclear disaster in Chernobyl, Stalker can be read as an anticipation of this incident and its consequences. The film tells the story of a civilizational crisis of meaning taking hold of all social sectors and providing no deliverance at all.

In both the film and the exhibition, the “zone”, in its vicissitude, offers itself a surface of projection for the notions of progress and enlightenment. At the same time, it attests our disrupted relationship to natural resources. A zone often originates after an event brought about or influenced by humans. In retrospect, the way in which the occurrence and its effects are dealt with often appears as a vain attempt – the zone becomes a central motif of media coverage, an object of research, a memorial, or the destination of excursions. The imminent powerlessness is held at bay by efforts to explain and clarify. Are the traditional instruments of human cognition in the form of science, art and religion failing? The exhibition addresses these and related questions.