This is a Free Zone 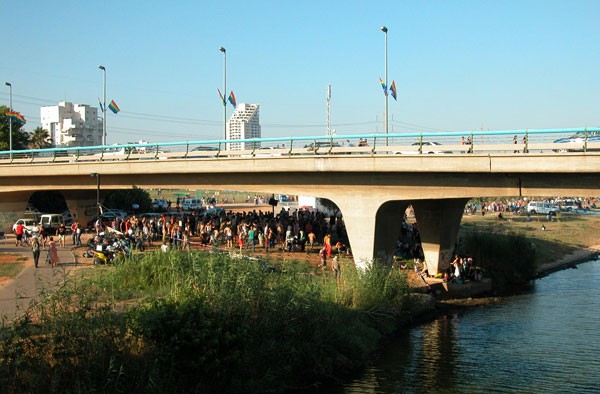 Photo: Shay Ben Efraim
THIS IS A FREE ZONE
Queerhana in the context of autonomous movements in Israel/Palestine from 2001-2009
27 May – 2 July 2017

In 2002, several queers set up a camp under a highway bridge in Tel Aviv, just a few hundred meters from the huge Gay Parade taking place at the same time. They were equipped with a sound system, DIY art, glitter, and a banner reading “Mi she mekabel jehol lehitkabel“ (Hebrew: He who accepts will be accepted). The party under the bridge grew rapidly and marked the beginning of a queer movement that until 2009 organised parties at different places in Jaffa/Tel Aviv: Queerhana.

Inspired by Hakim Bey’s concept of a “Temporary Autonomous Zone” (1991), Queerhana created free spaces in a society shaped by war and racism that were at once safe spaces and sites of political activity, where deviation from social norms, gender ambiguity, and opposition against the Israeli occupation policy could be expressed in a self-confident and creative way. The movement offered Jewish and Palestinian queers a political and social home, something which they were not able to find in Israel’s mainstream gay scene.

The exhibition THIS IS A FREE ZONE documents the origin and development of Queerhana in the context of other autonomous movements in Israel/Palestine from 2001 to 2009. 15 years later, the project takes a look back and raises questions regarding the connection of party and politics: (How) can one dance during war? What is necessary for creating a common space for Palestinian and Jewish-Israeli queers? Can a “safe space” be created without repeating the same excluding power relations and dichotomies that the zone actually seeks to overcome?

Based on these questions, the project searches for inspiration for the present.