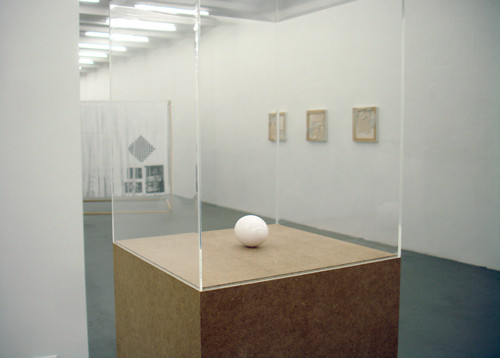 Giving a work a title that simultaneously claims its own absence is a much-loved artistic strategy. Untitled is the title which has been used most frequently in contemporary art since the 1970s.
Given the history of non-titles in the 20th century the question arises of how contemporary artists deploy titles that claim not to be titles. The exhibition UNTITLED (OHNE TITEL) addresses this question. The focus is on works that convert the paradoxical qualities of their titles into productive artistic strategies and tie them in to an analytical approach.

Catalogue – with illustrations of works by all the artists and texts by Tobias Vogt, Edda Kapsch, Christin Lahr and Lena Ziese, ISBN: 978-3-938515-37-2

Tours through the exhibition each Thursday at 17 h

The works address the conditions and requirements for the artists' own respective artistic practice within the operating system which is art, the semantic elasticities of extending the title to cover the work and its context and finally also the strategically positioned voids relating to supposedly unambiguous political and cultural facts. In contrast to their historical precursors the works start out primarily from details and apparently marginal aspects, from which they then develop specific approaches to issues.

The artists of the exhibition use the reflexive deployment of their respective artistic media for an examination of social and cultural authorities in a way that is at once playful as well as questioning. The contradiction between designation and non-designation affords them an open space for their reactions, which are characterized by two tendencies. Titles such as Untitled or o.T. or Not yet titled are features of a an approach that rejects overhasty categorization and refers back to the work as such. Like a Möbius strip they move between a "both-and" mode of thought and play the hermeneutic ball back to the observer.
In his work titled What’s my name? Karl Holmqvist demonstrates this tendency by confronting the reader with a direct question which cannot be answered, thus heightening the contradiction between designation and non-designation. All the works in the exhibition alternate between a frankness positioned so as to make a point and an analytical stance towards social conventions in general and/or the art system in particular.
The exhibition also shows several series by Ull Hohn , an artist who died young after having devoted himself to questioning the paradigms of art history and who in the 1990s investigated the structures of "appropriation" and "institutional critique".

Karin Sander, Famed and Friederike Feldmann have each produced new works for the exhibition at NGBK.

An exhibition of the RealismusStudio of the Neue Gesellschaft für Bildende Kunst (NGBK)
www.ngbk.de