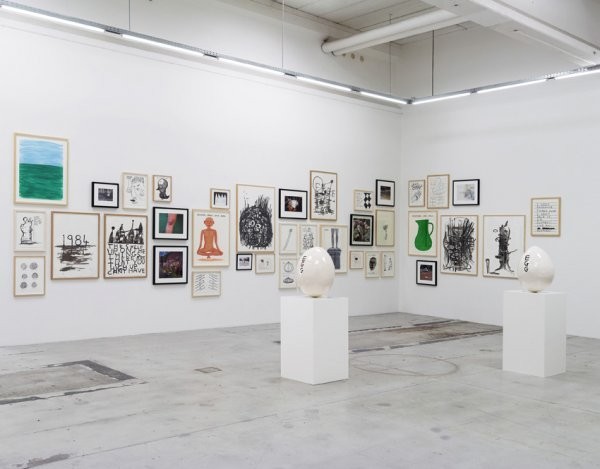 Galleri Nicolai Wallner is pleased to present "Donde Esta La Playa? The Summer Show". Exploring the dichotomy between the reality of our situation and that which we desire, the exhibition takes on the eternal wish of being somewhere that you’re not—the idea of a metaphorical summer that seems always just out of reach.

This desired reality can come in the form of something reasonable, a projection of what we already have and what might be to come, or something entirely imagined. Either way, it is a place and time which we are eternally moving towards and thinking of, be one that risks staying such and never becoming a reality—the ephemeral summer, where the living is easy, the drinks are free and it never rains.

With some of the works, this creates an almost surreal feeling as flashes of this reality are given, always remaining outside our grasp. Opening the exhibition is Elmgreen & Dragset’s Cooling Box. Adrift in the space, the work seems lost or out of context, as if it were the remnant of a party now long-gone—or even worse—one we just can’t find. An immersive installation of over 60 works by David Shrigley expands on this otherworldly feeling, almost as if through the installation the spectator becomes lost in the artist’s head, seeing the world through a set of eyes that is not their own. The atmosphere is both welcoming, yet at the same time exotic, as there is almost a sense of transgression, as if you know if you should not be there but just can’t help yourself catch a glimpse. Continuing on this theme, Jakob Kolding’s collages put forward layered representations, with each element both specific and at the same time ambiguous, creating a narrative that exists in a kind of loop between a reality that is tangible and a reality which remains elusive. Two sets of photographic works by Dan Graham documenting the United States from 1967 to 2006, while honest in their representation, shows a world that exists without context, presenting a uniformity that exudes a familiar convention, but also an almost dream-like world in which the spectator is invited to imagine themselves.

With other works, this push towards that which remains out of reach takes on a more direct form. In this sense, perhaps the most straight-froward work is Jonathan Monk’s The World in Bloom—a large-scale map created entirely with different floral prints, giving the impression of a much happier, much more cohesive geopolitical situation. Alexander Tovborg’s two paintings explore the idea of how we imagine the other through emotive paintings of dinosaurs, revealing a subversive need in human nature to analyse, personify and create a story for that which we do not know, in a sense creating a parallel alternate world of understanding that runs in tandem with reality. Bringing the exhibition full-circle, is a Jonathan Monk Parrot Painting. It’s irreverent message, expressed through the words of John Baldessari, states “Almost every painter arrives at the stage when he would like to exhibit his work”. This written desire, while full of irony, puts forward a very concrete idea of a future, attainable only by some, full of recognition and success.

The pursuit of this other reality becomes a never-ending series of questions all aimed at getting a little bit closer to that which we desire.