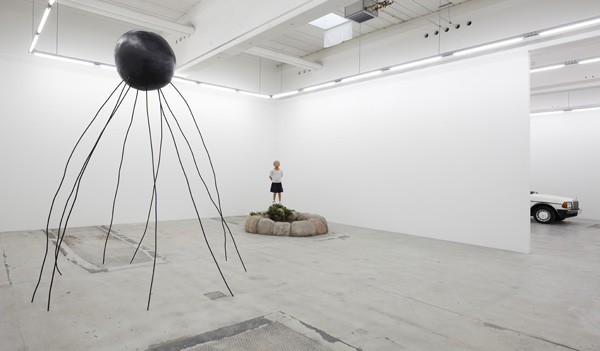 It is a great pleasure for Galleri Nicolai Wallner to present the exhibition Odd Size with major works by David Shrigley, Peter Land, Jonathan Monk, Jens Haaning, and Elmgreen & Dragset.

David Shrigley embraces both the melancholic, pathetic and disillusioned aspects of life and focuses on the absurdity of them. The sculpture Thing looks like it rather precariously stepped out one of the artist's b/w drawings. Towering on long stilt like legs the spider like creature appears at once both menacing and touchingly fragile.

The work Snapshot by Peter Land presents a young girl spitting water into a small pond. While the figure recalls Degas' infamous sculpture "La Petite Danseuse de Quatorze Ans" there is something strangely grotesque and almost indecent about the continuous stream of water jetting from her mouth. Like in other of Land's works the apparently innocent childhood universe becomes a setting for feelings of maladjustment and an undisciplined subconscious mind that constantly threatens to take over.

As dictated by its title Jonathan Monk's painting Andy Warhol's Chairman Mao Hand Made in The Peoples Republic of China is based on an appropriation. Jonathan Monk has had a Mao portrait by Andy Warhol remade by anonymous Chinese artists from a studio that specializes in commissioned copies of famous works. The work has been remade not as a silkscreen (as the original) but as a hand painted copy pointing towards another understanding of originality and authenticity. Monk rethinks the inherent serialization of POP art as well as offers a comment on the global (art) world of today.

Using familiar, innocuous objects Elmgreen & Dragset comment on how sexuality and masculinity plays out in contemporary culture. Catch Me Should I Fall sets the stage for a quintessential rite of passage: A young boy standing on the very edge of a diving board. As such the diving board acts as a place of transition - going from static to dynamic, from fright to courage, from child to adult. Establishing your identity - also sexually - is at the core of adolescence and as Elmgreen & Dragset's work underlines not without its inherent dangers.

Jens Haaning invokes social borders in his art, depicting and emphasizing issues of co-existence and the marginalization of groups within society. Turkish Mercedes refers to a particular model of Mercedes Benz that was so conspicuously popular amongst Turkish immigrants in the 90s that it even became a figure of speech. Fitted with loudspeakers that broadcast jokes in Turkish the car becomes a potent but also ambiguous symbol of exclusion and inclusion. Incomprehensible for most people hearing the jokes - the work turns the tables and makes the majority feel outside.
www.nicolaiwallner.com