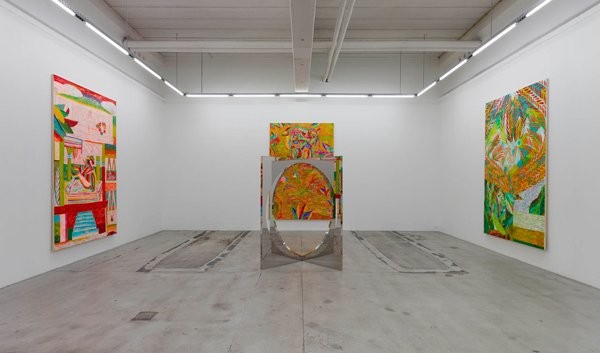 It is a great pleasure for Galleri Nicolai Wallner to present Sacra Conversazione an exhibition with new works by Alexander Tovborg and Jeppe Hein.

The exhibition sets up a meeting between two formally very different artists - Tovborg being predominantly a painter whereas Hein works with installation and sculpture. Using simple forms and reflective surfaces Hein's works directly and surprisingly address the physical presence of the viewer and the surrounding space. Tovborg’s paintings capture you in quite a different manner through their large scale and vivid imagery. Through his works Tovborg explores spiritual issues drawn from his own personal thoughts and beliefs.

The title of the exhibition "Sacra Conversazione" refers to a concept of Renaissance painting with religious figures engaged in contemplative conversation. Traditionally this followed a strict set of rules and preformed norms. During the 15th century it gave way to a more intimate and immediate way of depicting the subject – mirroring a change in belief and a more individual approach to religion.
In the exhibition Hein and Tovborg engage in a dialogue set within the framework of the spiritual. In five large-scale paintings of various sexual encounters in an Arcadian setting, Tovborg depicts the Old Testament’s story of Adam and Eve and the fateful moment they decided to eat the forbidden fruit thus gaining knowledge and awareness. Though obviously more abstract and less direct in their approach to the spiritual, Hein’s installations also points to a place for spiritual reflection. The immediacy of the works opens up a space for contemplation for the viewer and a possibility of enlightenment.

Already an established international artist, Jeppe Hein has had solo exhibitions at prestigious institutions including Centre Georges Pompidou (Paris), Schirn Kunsthalle (Frankfurt), The Danish National Gallery (Copenhagen), and the Sculpture Centre (New York). Recently Jeppe Hein has exhibited in Madison Square Garden (New York), ARoS (Aarhus), 21st Museum of Contemporary Art (Kanazawa), and Bass Museum of Art (Miami).
This is the second time Galleri Nicolai Wallner shows Alexander Tovborg, who recently opened a solo exhibition in Italy and later this year will have another presentation in Germany. A catalogue of Tovborg’s works with an essay by Jörg Heiser and a short story by Tom Morton will be published later this spring.
We are happy to welcome you in the gallery.