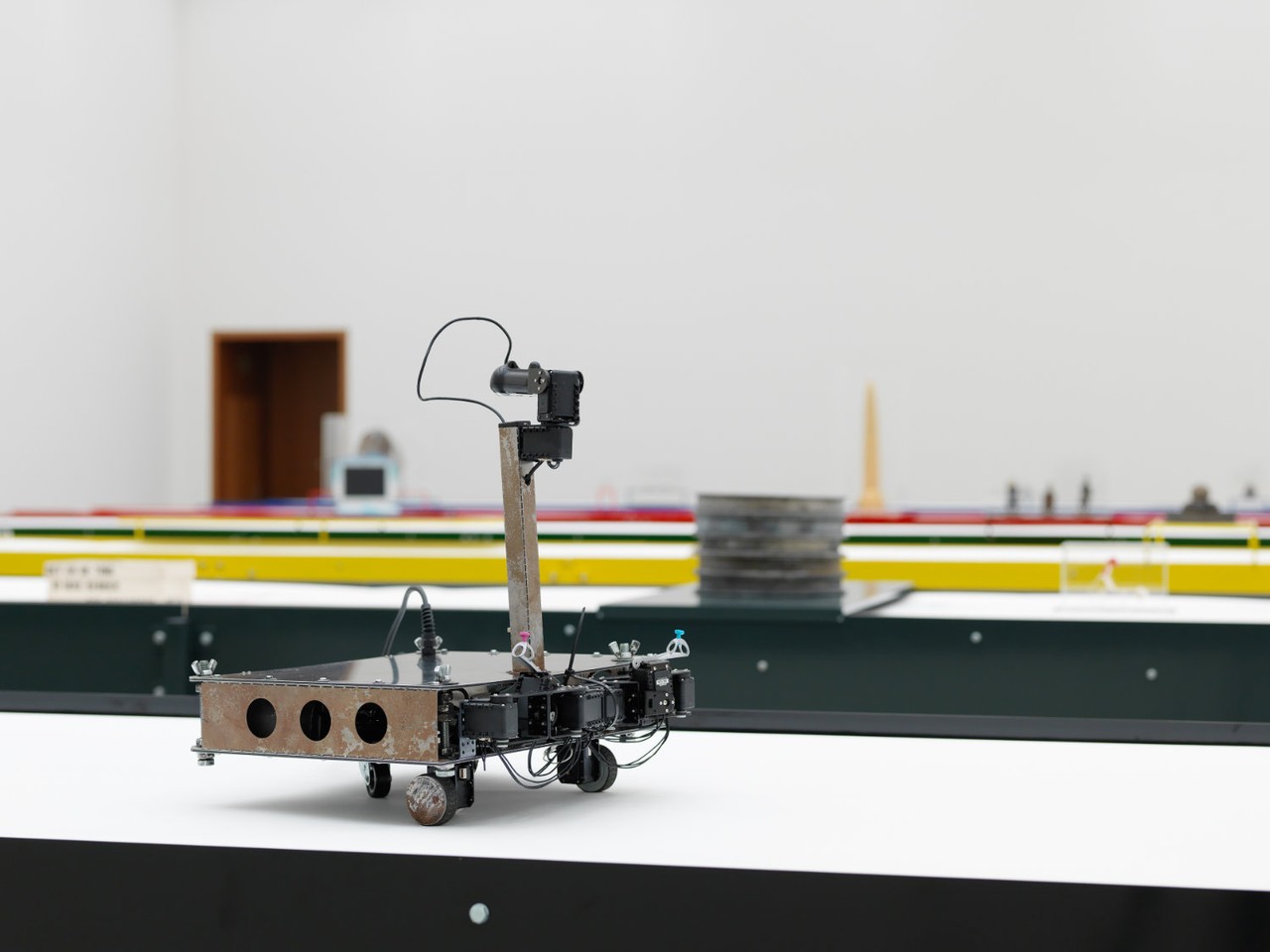 Goshka Macuga, "Before the Beginning and After the End, 6 pieces", 2016/18 (Detail). Courtesy of Goshka Macuga and Patrick Tresset. Photo: Neues Museum (Annette Kradisch) 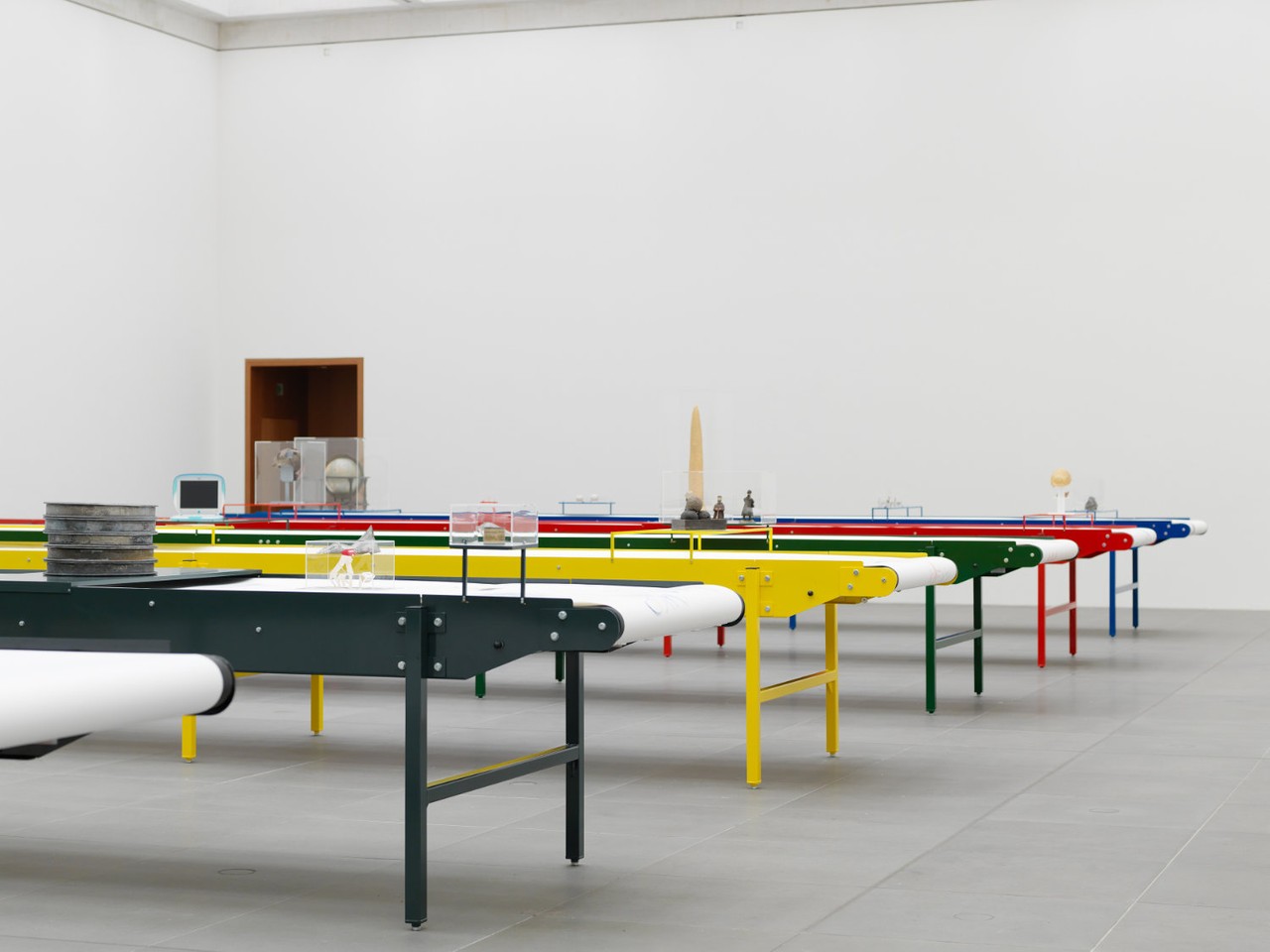 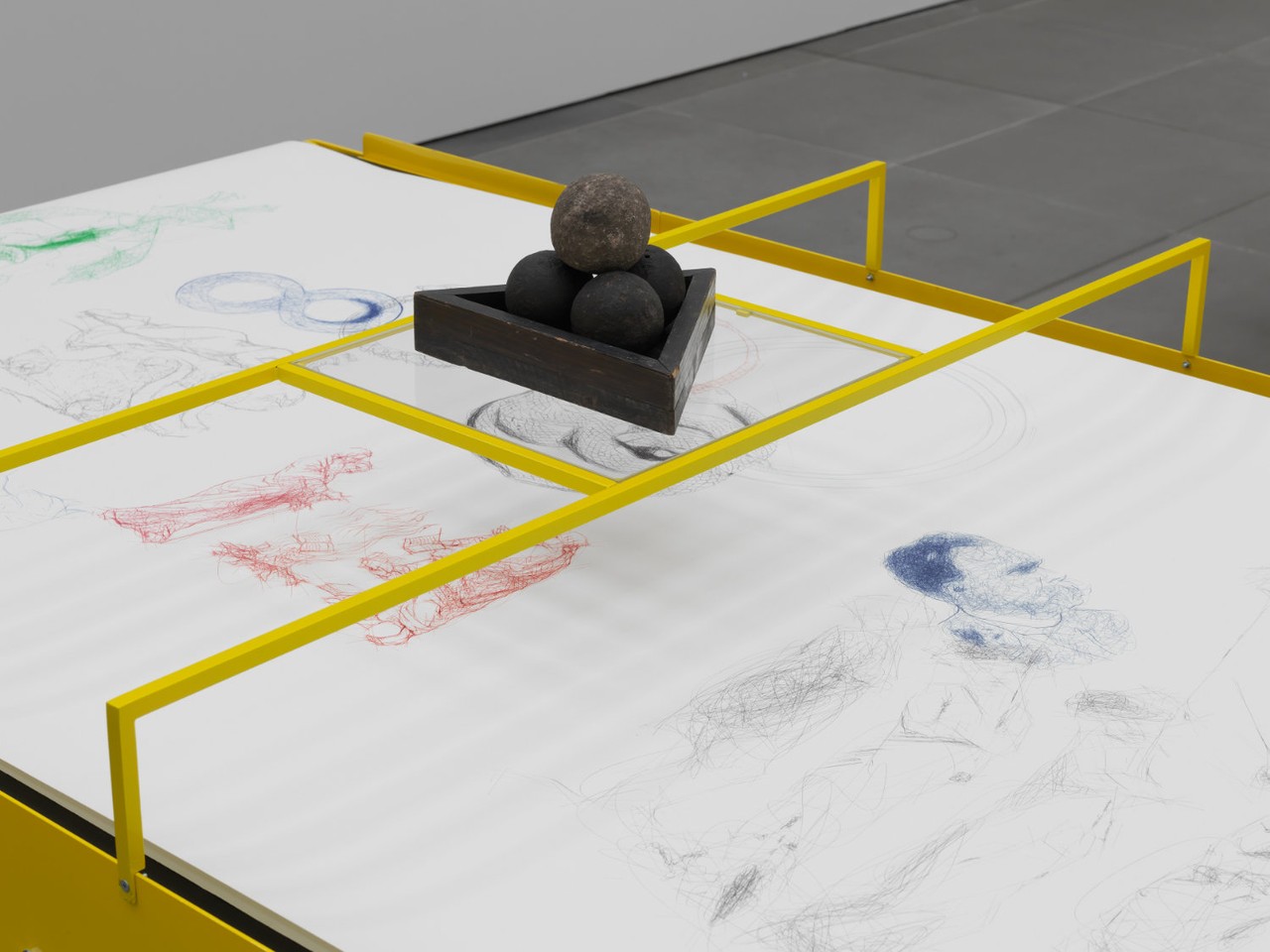 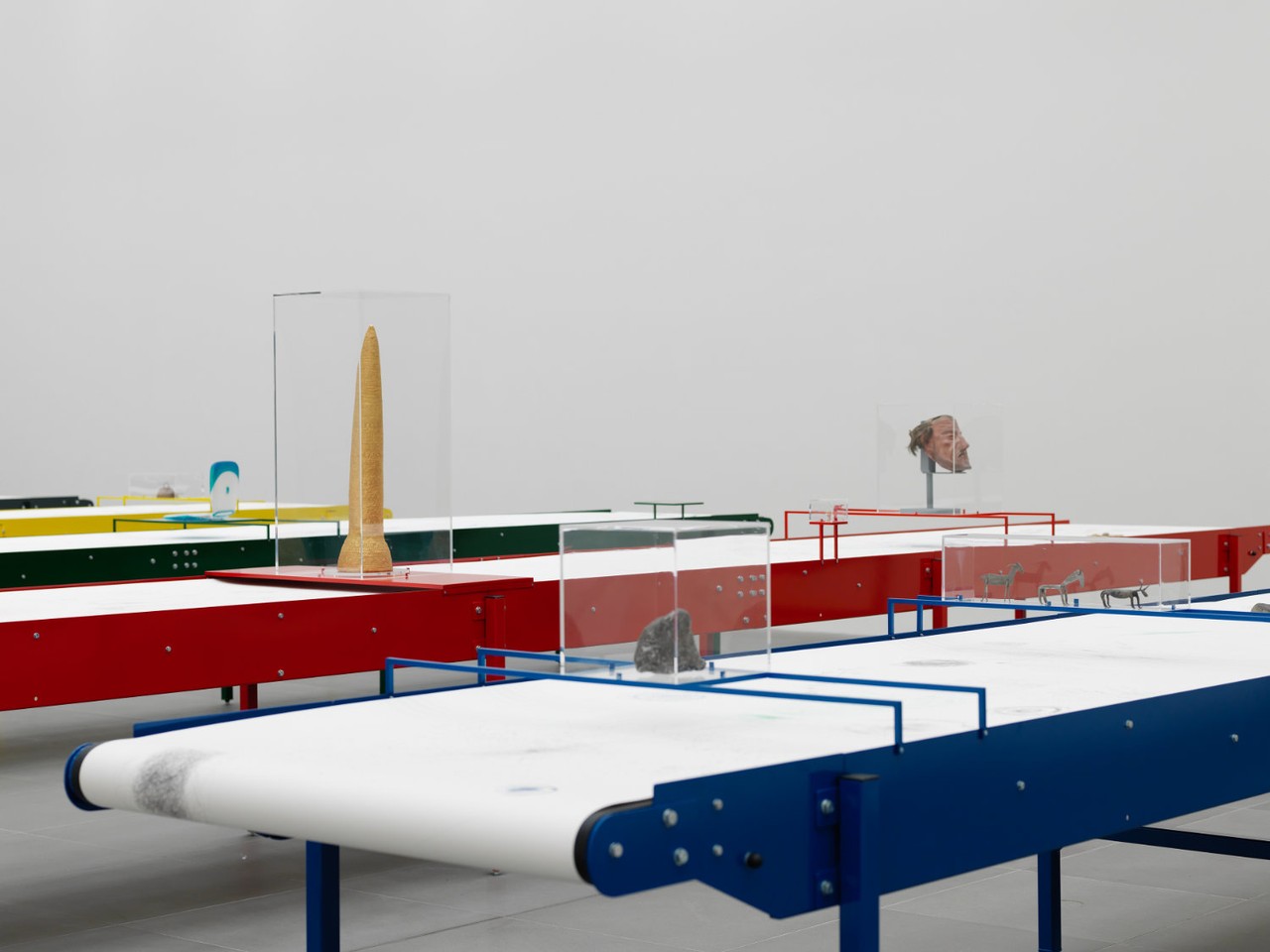 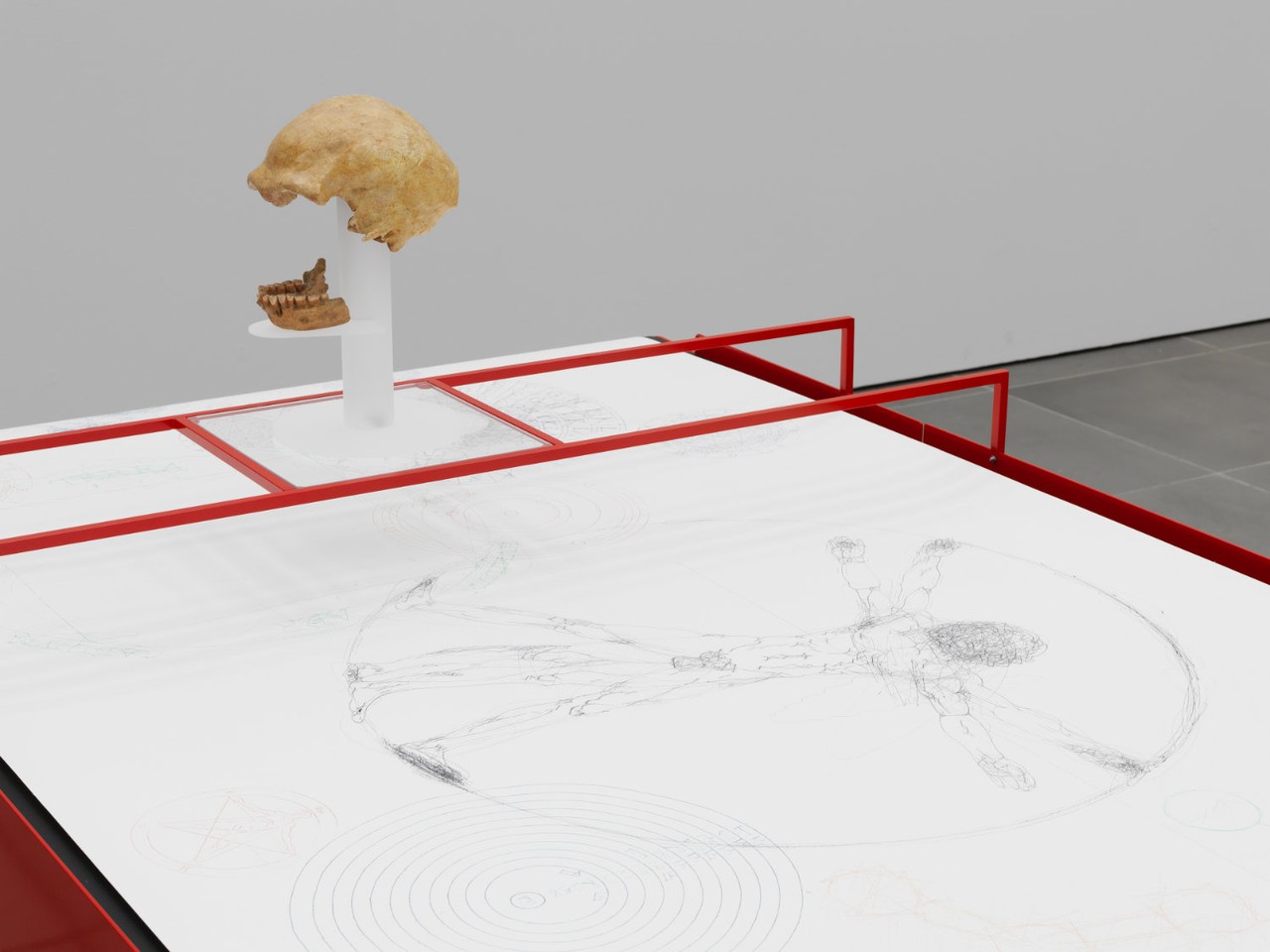 Goshka Macuga, "Before the Beginning and After the End, 6 pieces", 2016/18 (Detail). Courtesy of Goshka Macuga · Photo: Neues Museum (Annette Kradisch) 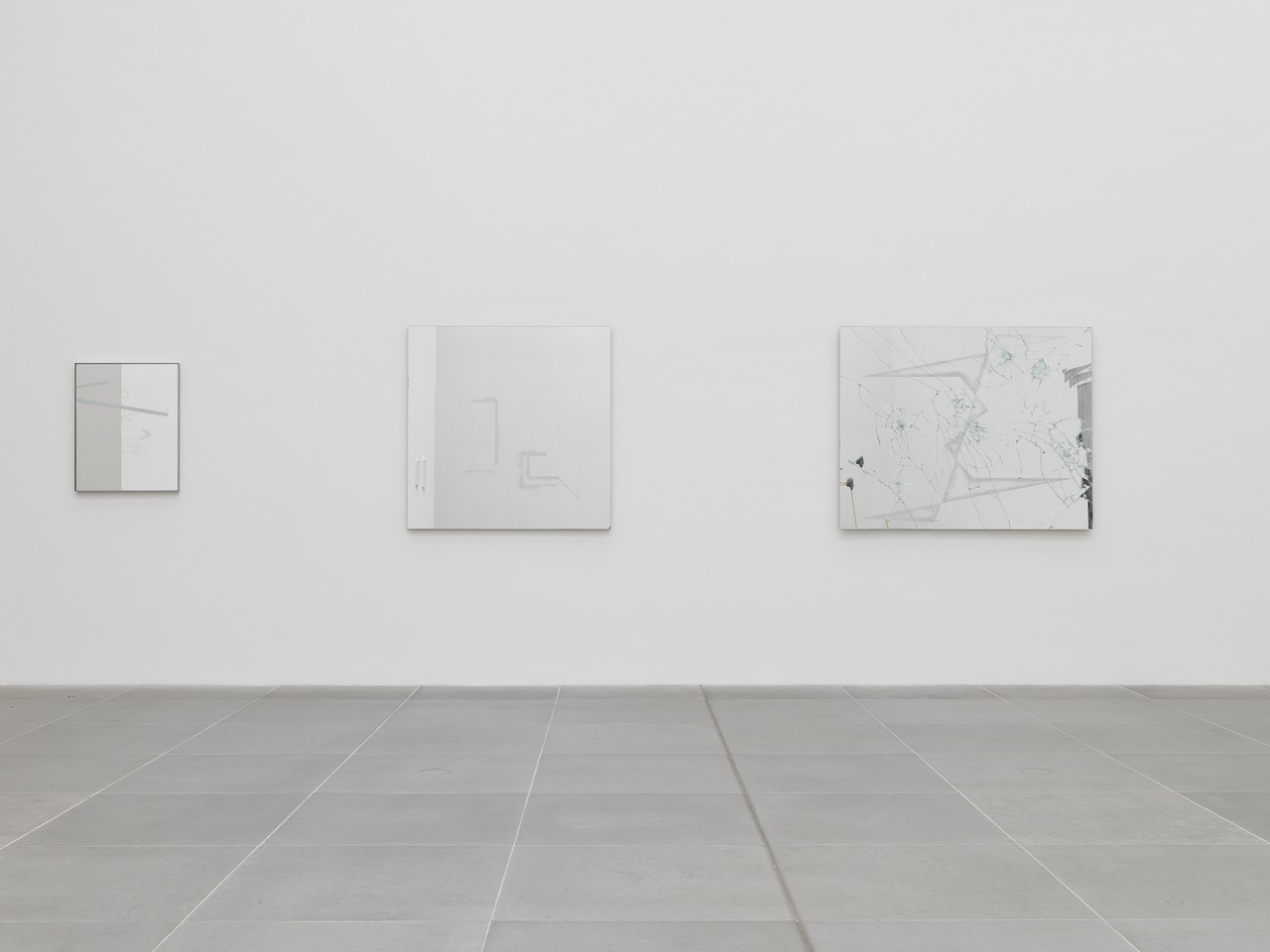 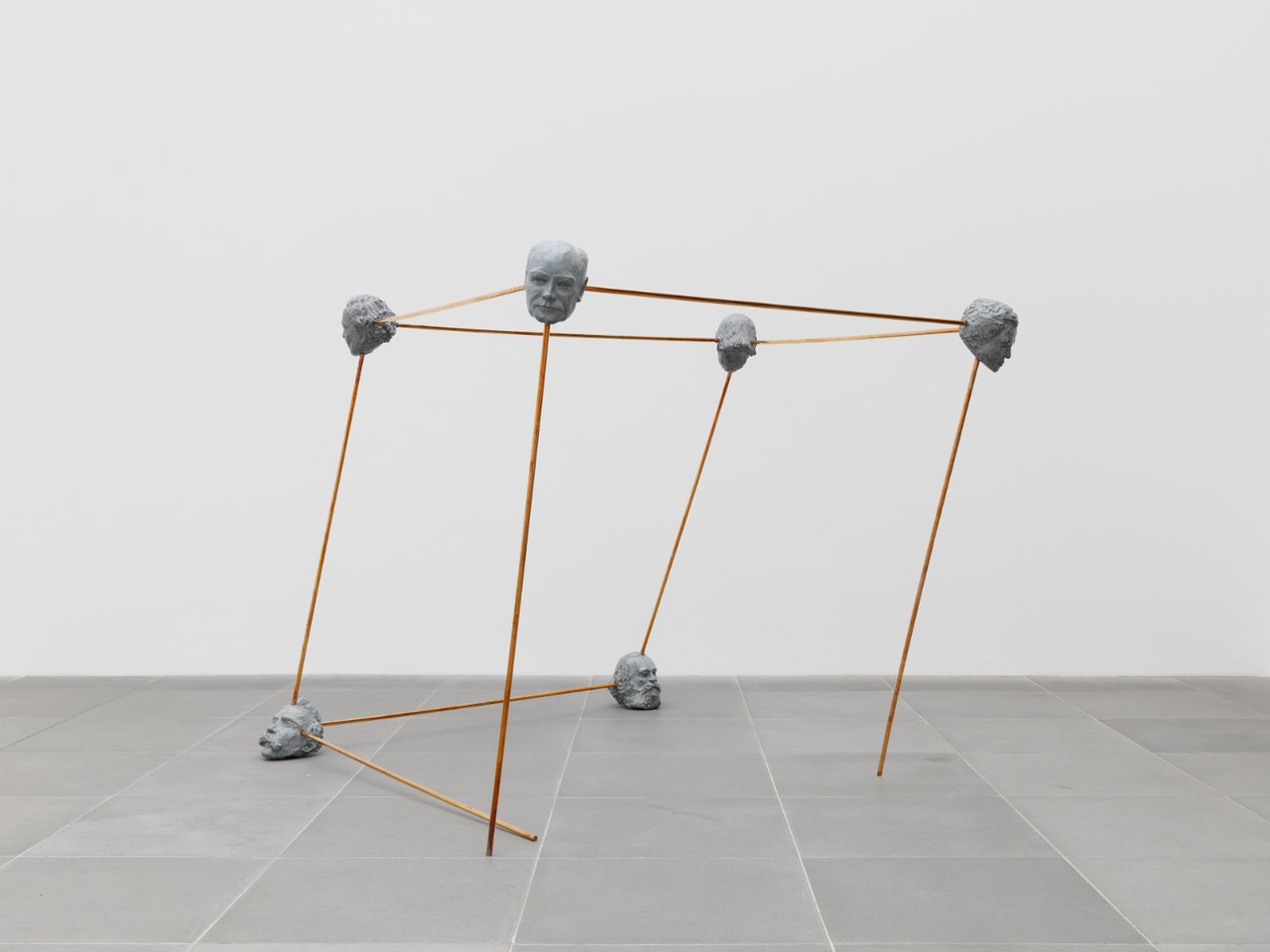 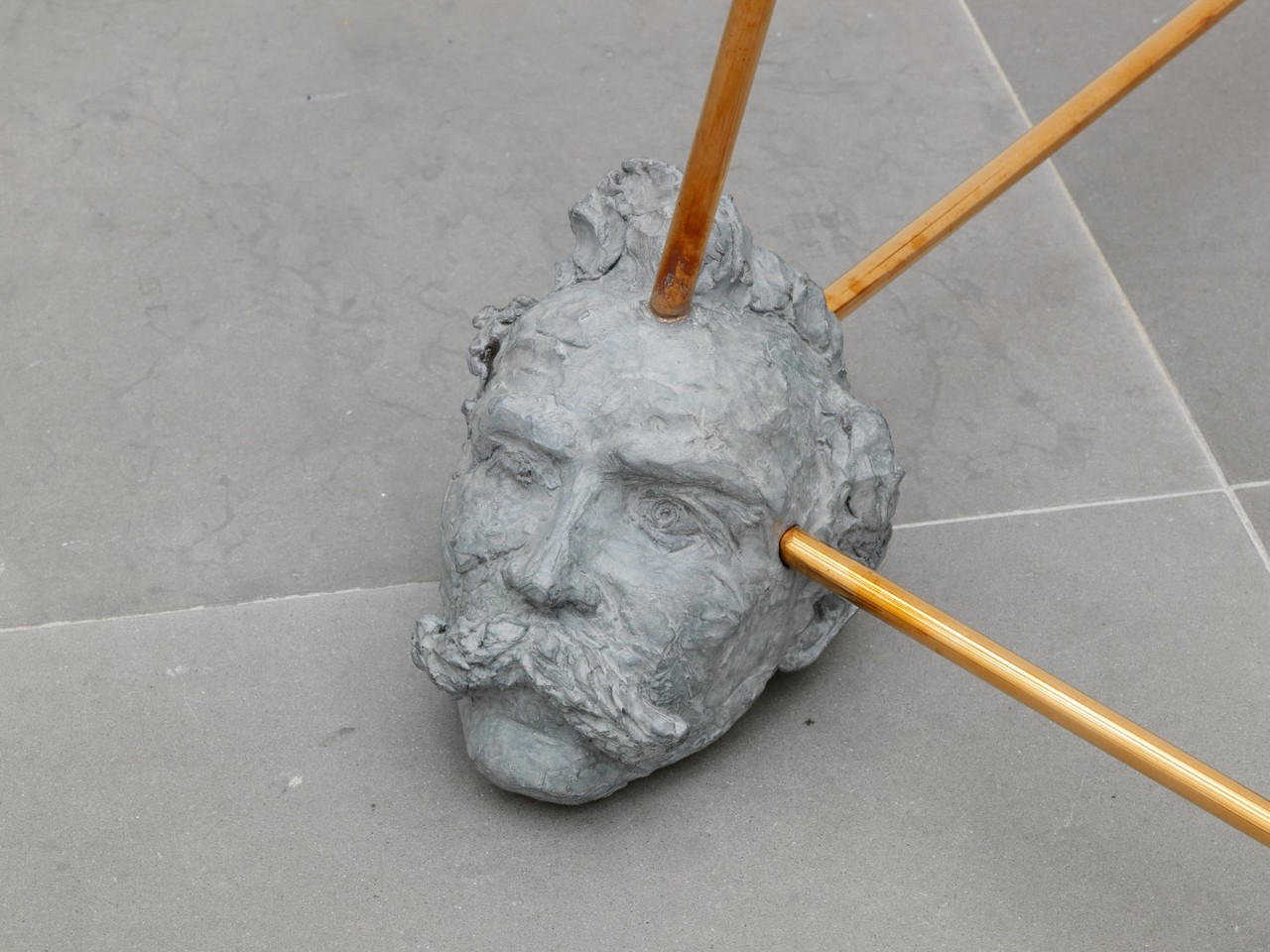 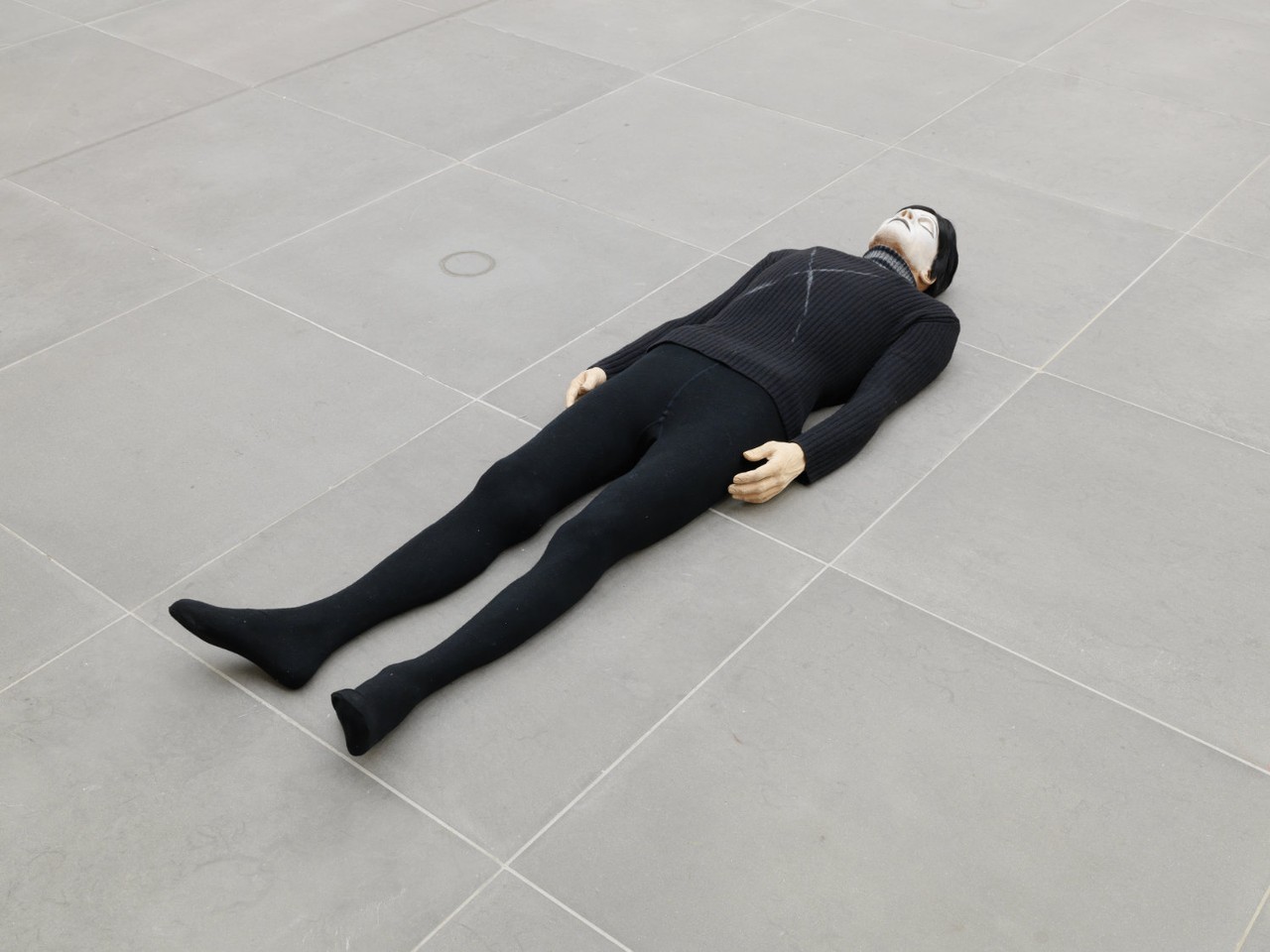 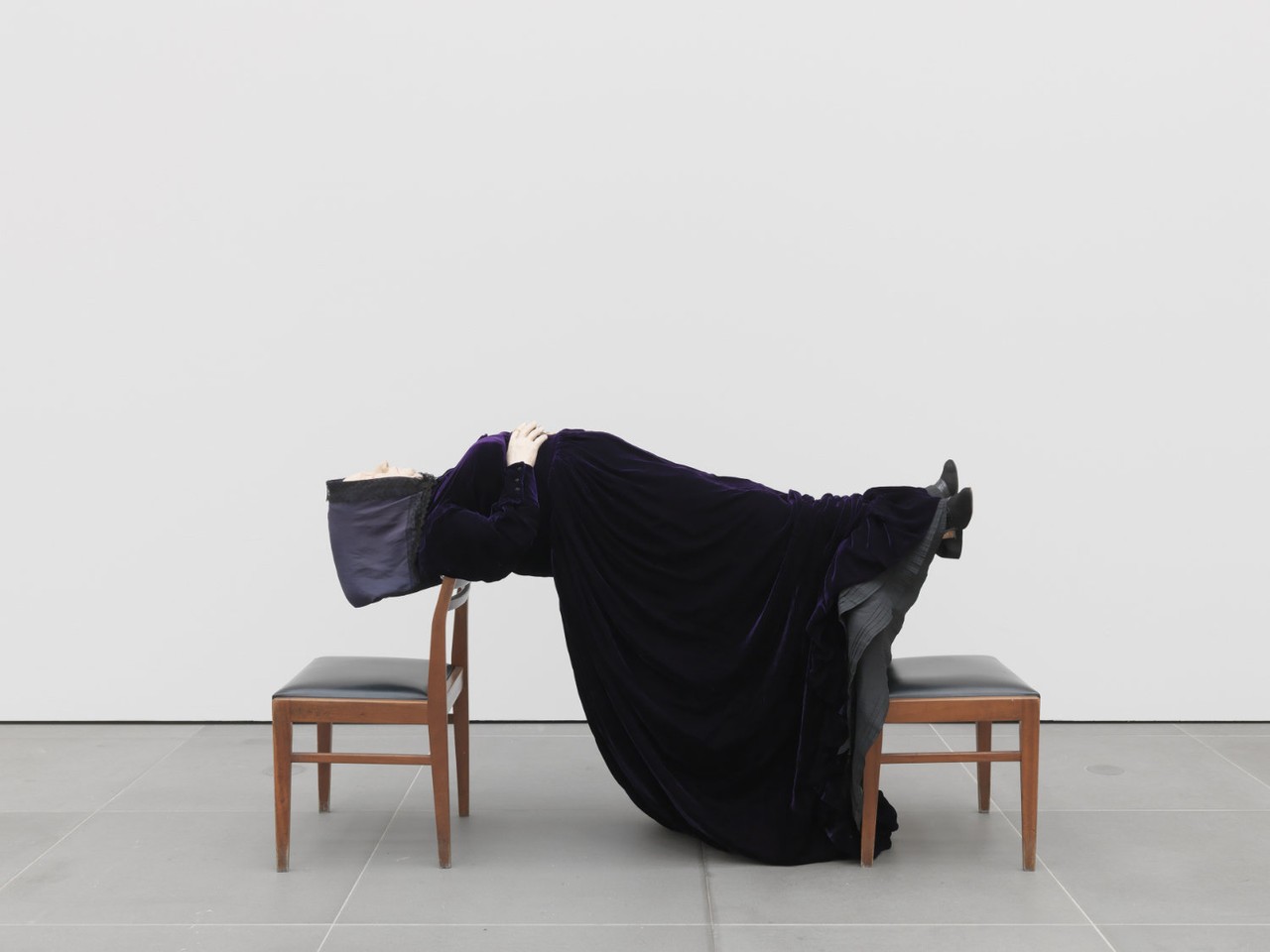 Goshka Macuga, "Madame Blavatsky", 2007. Sammlung Monika Schnetkamp / Collection Monika Schnetkamp. Photo: Neues Museum (Annette Kradisch)
The Polish-British artist Goshka Macuga (born 1967) works in the field of installations, using media as varied as photo collage, sculpture, large-format tapestry, video and performance. She is known for her diverse approach that extends to the curatorial and the narrative. Using extensive artistic research, she develops storylines for her works and exhibitions in which she combines fiction and history. Her “materials” are pivotal moments in human history, as well as works by other artists, which she stages in playful displays.

Macuga is interested in the myriad connections within cultural history, especially that of the international avant-gardes of the twentieth century. For her works she draws on the reservoirs of our collective visual memory, using existing artworks as readymades for her encyclopaedic plots, inspecting archives, and using the results to develop contemporary cabinets of curiosities. With her selections, she ranges across historical periods and disciplines, guided by a visual fascination with the objects, but also by her gift for associative linking.

She takes the viewer on a journey into the cultural history she illustrates, where, in the spirit of Aby Warburg, there is much to be discovered in phenomenological terms. She creates large-scale environments, filled with visual anecdotes about becoming human or post-humanism. Her works take shape via thinking about how history is written and the possibility of unmasking the illusion of objective historiography. In passing, she embeds within them topical material such as gender issues and critiques of capitalism. In aesthetic terms, she puts together sumptuous visual worlds, resulting in gleeful appropriations of the troubled spots of history.

In this way, Macuga visualizes possible instances of “intellectual cooperation”. The title of her current series International Institute of Intellectual Co-operation (since 2016) refers to a historical gathering of scientists and scholars who met in the 1920s and ‘30s, amongst others in Paris, as a kind of council of elders (for the League of Nations). In these works, she interconnects the specially made bronze heads of scientists and thinkers who took an interdisciplinary approach, as well as revolutionaries and activists, who – beyond the constraints of time and space – are set in relation to one another. These encounters are hypothetical gatherings that open up potential spaces for thought: Slavoj Žižek meets Pussy Riot, the Guerrilla Girls and Francis Fukuyama (Configuration #2); Albert Einstein meets Alain Badiou, Ibn Khaldun and a “Kanak” (Configuration #12). Their heads are connected by rods, the balance resulting from their mutual stabilization creating an installation that resembles a molecular structure. Parallel to the exhibition at Neues Museum, these configurations will be shown in a courtyard at the Germanisches Nationalmuseum.

The installation Before the Beginning and After the End (2016) consists of rolls of paper covered with drawings and three-dimensional objects presented on six large printer’s tables. With this reference to the original form of historiography (rolls of papyrus as one of the earliest media supports) she visualizes the current debate about post-humanism: from the dawn of history (beginning with Adam and Eve or with Darwinian evolution) via the Enlightenment, the rise of humanism (social development, technologization, modernization), transhumanism (including spiritual influences) and the self-destruction of humanity, through to the artistic systems of the twentieth century and the artist’s own contemporaries. All of these themes are “accentuated” with objects that stand for turning points in human history. For the “Nuremburg Version” on show at Neues Museum, she was able to draw on the treasures of the Germanisches Nationalmuseum. From the richly endowed collections of our partner institution, she selected archaic tools, scientific equipment, weapons, pioneering everyday items or cult objects to illustrate her themes. On the final “scroll”, two robots, developed by the artist Patrick Tresset, move around sketching diagrams and drawings of robots, thus leaving behind traces of fictitious future scenarios.

The Death of Marxism is a tapestry and accompanying performance showing the grave of Karl Marx, which usually bears the inscription “Workers of All Lands Unite”. Macuga alters this world-famous slogan to “Women of All Lands Unite”. Naked and clothed women from the visual world of the voyeuristic Czech photographer Miroslav Tichý as of herself, are arranged in a collage around the grave, seemingly engaged in some conspiratorial happening ...

In the exhibition Intellectual Co-operation, these and other works open up a series of elective affinities. In her artistic work, Macuga aims to keep nonchalantly linking theoretical and real matters in new ways, to think differently, and to facilitate an actualization of historical artefacts via artist process of recontextualization. With this exhibition project, she has facilitated a productive transfer between Neues Museum and Germanisches Nationalmuseum in which some epoch-making exhibits appear in a new light and in which turning points in (art) history are visualized, thus opening them up to a far-reaching discussion.

The exhibition at Neues Museum is Macuga’s first museum show in Germany. The artist was born in Warsaw in 1967 and has been living and working in London since the beginning of her studies in 1989. After participating in the Venice Biennale in 2009 and documenta 13 in 2012, she came to prominence internationally – in recent years she has had major exhibitions at Fondazione Prada, Milan (2016), New Museum, New York (2016) and Witte de With Center for Contemporary Art, Rotterdam (2017).
www.nmn.de