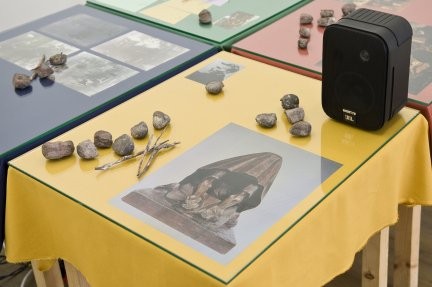 NoguerasBlanchard is delighted to present Tische (2013) a work by Andrea Büttner (1972, Stuttgart) part of the exhibition cycle The Story Behind, curated by Direlia Lazo.

Much of contemporary art is recreated in the story about itself, narratives that mediate between the work and the viewer either to convey the artist’s intention, explain the working process that underlies the images, or reveal deliberate and purposeful interpretations. Many artists use art to experiment with the modalities and mechanisms of storytelling; to narrate, to recount and to explain the interpretive universe surrounding our direct experience, which becomes another feature of these works. The Story Behind presents a group of works where stories, whether fictional or real, manifest and embody the oral and parallel world that accompanies the images.

In the works of Andrea Büttner there is a dialogical relationship between exposed and hidden states. A process that the artist associates with shame. “Shame marks the threshold of visual representation and might at the same time be impossible to represent. Shame determines what we show or what we hide, what we expose and what we veil. Shame is intimately related to exhibiting, to the gesture of showing, to aesthetic judgement, and to the norms and conventions according to which we move and judge in the art world”.

The main concerns addressed in her work are the circulation of value, the affective associations of the devalued and the juxtaposition between moral and aesthetic judgment as well as different conceptions of poverty both in art and in society. In the words of Richard Birkett: 'Poverty, as a material, social and emotional state of being that reaches beyond critical detachment, exists at the heart of the relations within her work'.

The installation presented here combines two works. Tische, 2013 consists of four tables on which Büttner displays a collation of objects. A series of images of paintings from the History of Art dealing with poverty, hunger and insecurity include The Potato Eaters (1885 ) by Vincent Van Gogh, The Stone Breakers (1850) by Gustav Courbet, Veiled Beggar Woman (1919) by Ernst Barlach, Cologne Beggars (1972) by Sigmar Polke alongside paper coin wrappers and bronze sculptures cast from zebra droppings from her local zoo in Frankfurt. Tischreden (Table speeches), 2013 is a sound piece which features a series of talks on the subject of poverty, first pronounced at a dinner offered at the MMK Museum für Moderne Kunst in Frankfurt, where this work was shown. Among the speakers were the curator Carolyn Christov- Bakargiev, theorist Franco Berardi (Bifo) and Lise Soskolne from the activist group Working Artists and the Greater Economy (W.A.G.E.).
Drawing on past works such as Little Sisters: Luna Park Ostia, 2012 presented at Documenta 13, that revolves around a video about the Little Sisters of Jesus, an order of contemplative nuns, Büttner’s work can be read as a series of behavioural studies, with a particular interest in social and ethical questions related to dignity and shame, self-consciousness and emancipation, value and insignificance, and the belief systems and conventions by which they are determined.

Andrea Büttner lives and works in London and Frankfurt.

Andrea Büttner (Stuttgart, 1972) Büttner studied both art history and philosophy, and in 2010 completed her doctorate on the subject of shame and art at the Royal College of Art, London. Her recent exhibitions include: Andrea Büttner (Museum Ludwig, Cologne, upcoming); BP Spotlight (Tate Britain, 2014); The Banff Centre (Canada, 2014); Hidden Marriage (National Museum Cardiff, 2014), Andrea Büttner (Milton Keynes Gallery, 2013), MMK Museum für Moderne Kunst (Frankfurt, 2012), The Poverty of Riches (Whitechapel Gallery, London). She was the winner of the 2010 Max Mara Art Prize for Women and participated in the 29th São Paulo Biennial (2010) and Documenta 13 (2012). She currently teaches at the Academy of Fine Art in Mainz.

With many thanks to Hollybush Gardens, London.
www.noguerasblanchard.com