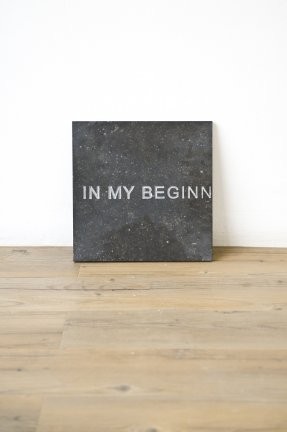 NoguerasBlanchard is very pleased to present an exhibition by Francesco Arena in the gallery's space in Barcelona. Francesco Arena's work Pilastro (2013) is the fourth presentation within the exhibition programme The Story Behind curated by Direlia Lazo.

Much of contemporary art is recreated in the story about itself, narratives that mediate between the work and the viewer either to convey the artist’s intention, explain the working process that underlies the images, or reveal deliberate and purposeful interpretations. Many artists use art to experiment with the modalities and mechanisms of storytelling; to narrate, to recount, to explain the interpretive universe surrounding our direct experience becomes another feature of these works. The Story Behind presents a group of works where stories, whether fictional or real, manifest and embody that oral and paralell world that accompanies the images.

The historical and the personal constantly overlap in the work of Francesco Arena. A first approach to his work brings to mind povera and minimalist aesthetics, however at the heart of Arena’s practice lies his search for precision: distances, heights and weights that reveal critical commentaries of recent Italian history. A floor covered with stacks of pin-striped tiles measuring 18.900 meters represents the distance walked by activist and anarchist Giuseppe Pinelli on his last day as a free man before being arrested and killed on December 12, 1969 (18,900 metri your ardesia (la strada di Pinelli), 2009). A brass bar of nearly 9 feet long embodies the distance between two apartments in Milan, one was discovered to be a key hideout of the Red Brigades and the other was where two activists were shot in 1978 by a group of right-wing extremists (Da 8 a 9, 2011). In Arena’s work, this distance becomes a thin, suspended bronze body weighing the same as the artist. Transformed into a universal unit of measure, it unites two places in which events that affected the entire country unfolded and that are still obscure even today.

On the choice of historical references Arena said “When I choose a fact that informs the work, I’m not doing it to try to discover truth, but to grasp a truth that, starting from the fact in question, becomes a tool for looking at everything else.”

Most of Arena’s measurements involve his body as a crucial measure of determining the final object. Following in this line, Pilastro (2013) consists of a vertical element that connects the floor with the ceiling, an unfinished pillar. A clay column built around a metal prop of the kind used to reinforce ceilings as high as the artist can reach on tiptoe. In a sense, Pillar is a self-portrait of the artist that strengthens his presence in space intervened.

In Positive di sinistra imprint with testa (Roosevelt) (2012) the artist places a small print representing an image of Roosevelt in between a metal imprint of his left shoe. With similar humourous and critical undertones he has made installation / portraits of Churchill, Stalin and Eisenhower. As noted by Vincenzo Latronico “these works can also be seen to embody how our view of history is influenced by our own position in it. If the relation between the two sides of Arena’s practice (objective/subjective, historic/personal) were reversed, rather than personal depictions of crucial historic moments, the artist’s work could be seen as a self-portrait of the artist as a product of history”.

During the opening of the exhibition Arena will present a new performance In my beginning is my end (2013) whose title is a phrase taken from the series of poems 'Four Quartets' by TS Eliot.