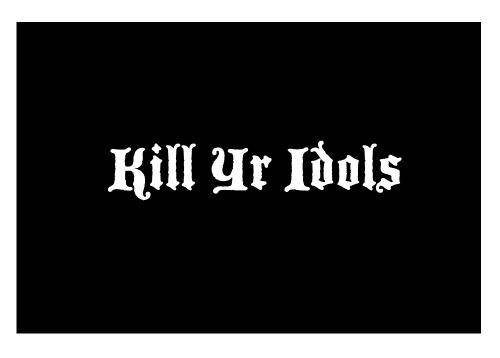 NoguerasBlanchard presents a selection of films from the Cinema of Transgression, a form of experimental cinema made by a group of low-budget filmmakers who emerged in New York City in the late 70's and which is usually absent from insitutional screening programmes (such as the MACBA's recent Cinemavision. Masterpieces of Experimental Film, 1956-2000), probably due to its controversial narratives and totally underground exposure. We have therefore decided to screen a month-long programme of films which we find most representative of the Cinema of Transgression. Kill Yr Idols illustrates the various cinematic strategies undertaken by these filmmakers during the heyday of this loosely knit movement. It includes films by Nick Zedd, Richard Kern, Tessa Hughes-Freeland, Kembra Pfahler, Jon Moritsugu, Henry Jones, David Wojnarowicz. The title Kill Yr Idols is taken from the Sonic Youth album (1983) with the same name and references the No Wave musical scene, characterized by its extreme nihilism and deliberate brutality, which greatly influenced the Cinema of Transgression.

In the late '70s and early '80s, following the punk explosion and the election of Ronald Reagan, the underground film scene exploded in New York's Lower East Side. According to Jack Sargeant in Deathtripping: The Cinema of Transgression (2000), "taking their inspiration from the extreme and brutal noise/jazz/post-punk No Wave music scene, a variety of filmmakers, photographers, performers, actors, and artists began to explore new, direct and confrontational modes of cinematic expression. Although their individual styles and concerns differed widely, these filmmakers produced movies that were influenced by both the aesthetic extremes of the exploitation movies playing in the sleazy grind house cinemas on 42nd Street, and the vicious extremities of daily existence: drugs, sexual brutality, poverty, and nihilism. They shared a desire to vent their scream on celluloid".

Whilst the films sought to break with the formalism of the academic, structuralist avant-garde, the work these filmmakers produced revealed the influence of such diverse fringe filmmakers as Jack Smith, Otto Muel, Luis Buñuel, Russ Meyer and John Waters, directors with whom they shared a confrontational aesthetic if not an immediately recognisable style.

The availability of cheap cameras and projectors, and sync-sound Super 8 film enabled these filmmakers to produce their work at a low cost, and the expansion of video technologies enabled easy dissemination to a wide audience. In 1985, The Underground Film Bulletin, edited by Nick Zedd, announced the manifesto for the Cinema of Transgression, a 'movement' that sought to transform all values by breaking all taboos associated with cinematic representation, conservative religion, traditional politics, and acceptable aesthetics.
www.noguerasblanchard.com