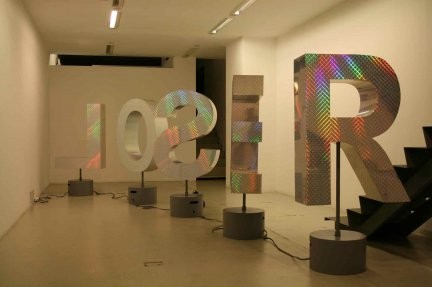 NoguerasBlanchard is delighted to present Loser by Piero Golia. This exhibition has been organized within the framework of “Fora de Joc” (Offside), an initiative proposed by the GIC (Independent Galleries of Catalunya) for the Tardor de l’ Art (Autumn of Art). Together with cultural institutions, Fundación Sunyol (Barcelona), Bòlit Centre d’Art Contemporani (Girona), La Panera (Lleida), this expansive and collaborative exhibition brings together football and art in works by over 30 international artists. 'Fora de Joc' aims to demonstrate in a comprehensive manner how unexpected, astute, careful and disarming the approaches adopted by artists can be in addressing such an all-pervasive subject as football. For years now, artistic and intellectual circles have been able to concede that football is an entertaining, fascinating and controversial game, a cultural phenomenon that permeates through the social structure. The importance of football is hard not to notice in Barcelona; the museum of F.C Barcelona is the most visited place by tourists. These days, football has a great deal to do with power, making it a topic for very varied opinions and discussions. While focussing on various aspects of the game – the ball, the players, the pitch, the rules, the management, the fans, the media – 'Fora de Joc' is only partly a thematic exhibition, since the subject of football repeatedly serves as a means to access other areas of life. Piero Golia’s installation Loser, a sign made out of five human sized glittering letters, each revolving on its own axis, does not quite deliver the message you would expect from such an eye-catching device. Like an anti-monument that spreads accross the gallery, the potency of its reception is further activated when confronted with the theme of football: the rise and fall of the teams, the auratic power of the players, the sparkle of celebrity glamour and the frustration of the bench. Golia endeavours through his actions and installations to build his own legend. Through persuasion, artfulness, seduction, humour, even irony, and candour, his work explores the functioning and the mechanisms of the world, and the strict categorizations which frame society. Fragility, unfinished things, useless attempts have been the main themes of Golia's sensibility. His works represent the world as a theater of the weak disguised as the strong: the apparent balance of reality shows the fugacity of our dreams in a dramatic way behind reassuring superstructures. Loser is a powerful statement vindicating those excluded from the writing of history or the view of contemporary society - a society whose values support individualism, competition, money, success, power - a culture of winners. Piero Golia was born in Naples, Italy in 1974. He currently lives and works in Los Angeles, California. His work has been featured in numerous exhibitions including Neon, Nomas Foundation, Roma (2008); Busan Biennale, Busan Museum of Modern Art, Busan (2008); Lucky Number 7, Seventh International Biennale, Site Santa Fé (2008); Uncertain States of America, American Art in the 3rd Millenium (2007), Galerie Rudolfinum, Prague, Le Musée de Sérignan, Sérignan, CCA Warsaw, Warsaw, Herning Museum of Contemporary Art, Denmark; Moscow Biennale of Contemporary Art, Moscow (2007); Gold Standards at P.S.1, New York in 2006. In 2004 his first feature film, Killer Shrimps, was screened at the 61st Venice Film Festival. The gallery would like to thank Galerie Bugada & Cargnel, Paris.
www.noguerasblanchard.com