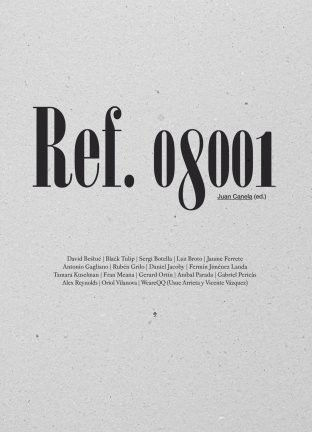 NoguerasBlanchard is delighted to present Ref. 08001, a publication conceived as an artist's book that also works as a framework for an exhibition within a space - the title nods to the gallery's postal code. The curator, Juan Canela, has invited a group of seventeen artists who are presently active in Barcelona’s art scene to create a specific work for the publication.

Ref. 08001 consists of a free circulation of 500 copies plus a limited edition of 30 copies which will include a slide of each artist. These will be projected in the gallery as an exhibition. The theme that runs through all the works presented is the idea of reference -in its broadest sense-, not only from an artistic point of view, but also in terms of any cultural, social, recreational or personal expression that might somehow generate influences or points of interest in the artists’ practice.

The working process proposed to the artists has been thought of in terms of ideas of obstruction and limitation. A number of predetermined guidelines have thus affected each project’s development. On the one hand, we have the book’s format: a black and white paper publication with a set number of eight pages per artist. On the other hand, we have the aforementioned concept of reference. Although each artist’s approach has turned out to be different in its formalisation, there are various common points of interest underlying many of the works. The proposal to work around a specific theme and format has been an attempt to stimulate responses that might expose key points in the artists’ works, as well as differences or shared interests between them.

The final proposals explore the work of artists such as Roman Signer, Felix González-Torres, Dora García, Sol LeWitt, or Joseph Beuys, and writers such as Stephen King or Charles Bukowski. There are some film references (La Dolce Vita, The Matrix, Back to the Future), characters from popular culture such as Mickey Mouse or Michael Jackson, and characters taken from other sources such as comic books. One may detect an interest in the visualisation of underlying themes of discourse in many of the works, as well as an attempt to find new interpretations and look at things from a different viewpoint. In others, there is a common will to read the world from the margins; the cracks; to question established discourse.

Ref.08001 emerges from the will to carry out an investigation on the immediate surroundings, and tries to feel the pulse of the city’s emerging art circuit. The point isn’t to carry out an exhaustive revision, but rather to present an outline of the artistic context, and to generate another meeting point for the artists working within it, as well as to provide a space that might help to shape this context. It is an attempt to present a snapshot that might materialise itself on paper: a portrait of the here and now.
The gallery would like to thank the collaboration of Galería Estrany de la Mota (Barcelona), Maribel López Gallery (Berlín), Galeria Toni Tàpies (Barcelona), Galería Valle Ortí (Valencia)
www.noguerasblanchard.com