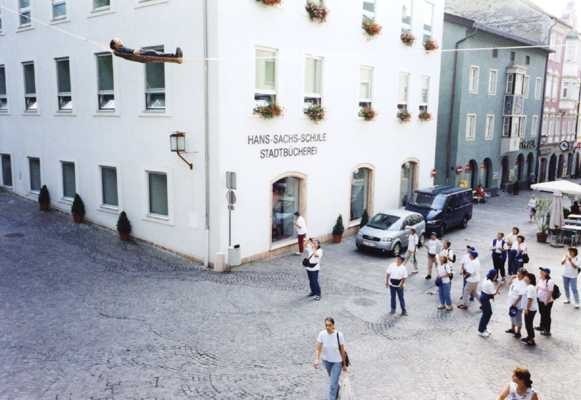 NoguerasBlanchard is pleased to announce the second solo exhibition in the gallery by Japanese artist Shimabuku (Kobe, 1969). Shimabuku’s Fish and Chips was first presented at Tate Liverpool for the 2006 International Biennial, where Shimabuku proposed a new vision of the British national dish.
The journey, rather than the arrival, is a main theme in Shimabuku ́s work. His performances, videos, photographs and installations are often inspired by chance encounters or discoveries made during his expeditions, where he finds ways, through local stories and myths, to connect disparate groups of people. Shimabuku often turns art into a game in which different people become its players and in doing so, questions neat distinctions and hierarchies. Shimabuku’s Fish and Chips has done just that, the shooting itself involving a team of Liverpool local people, and the event itself being just as important as the exhibition. Shimabuku thus finds new ways of engaging the public directly by creating interactive situations, whilst raising serious issues about the relationship between contemporary art practice and everyday life.
Filmed under water, every now and then a fish, swimming in the deep blue sea, seems to be surprised by a potato, which is also floating around under water. The British national dish has been turned into a humorous rebus. But this apparently absurd encounter between a fish and a vegetable ultimately encourages the scrutiny of the mundane elements of daily life. As the artist notes: “When you visit England, you see a sign of Fish & Chips everywhere. For me, the word "Fish & Chips" is quite poetic. It is almost like a poem, because there, I see a surrealistic encounter between potato from ground and fish from water. So in Liverpool, I wanted to make my own Fish & Chips.” In most of his works, Shimabuku explores the role of communication, memory and myth in the construction of both animal and human consciousness.
Shimabuku’s recent exhibitions include: Laughing in a Foreign Language, Hayward Gallery, London (2008); DAAD Galerie Berlin (2007); The Door into Summer: The Age of Micropop, Art Tower Mito, Japan (2007); Oriente e trópico, Palácio das Artes, Belo Horizonte, Brazil (2007); How to live together, MAC: Museo de Arte Contemporáneo, Santiago, Chile (2007); I love art 8, Watari-Um,the Watari Museum of Contemporary Art, Tokyo, Japan; (2006); Berlin-Tokyo Tokyo-Berlin, Neue Nationalgalerie, Berlin (2006); ANSTOSS BERLIN, Haus am Waldsee, Berlin (2006); Empieza el juego, La Casa Encendida, Madrid (2006); International 06, Liverpool Biennial, Liverpool (2006).
Forthcoming exhibitions in 2008 include a solo project at the Whitechapel Gallery, London.
Shimabuku lives in Berlin since 2004.
www.noguerasblanchard.com