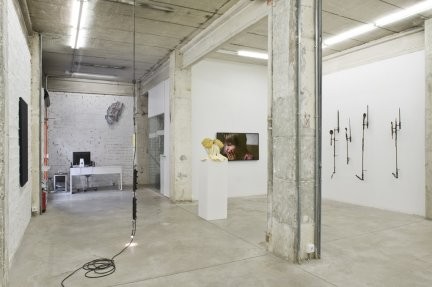 NoguerasBlanchard is delighted to present A Thousand varied uses, an exhibition curated by Kevin Gallagher and selected for the third curatorial Open Call organized by the gallery.

A wholesaler in Brazil wants to measure bulk minerals so online viewers can sense the scale of the different rocks she sells. In order to do so she uses the most readily available device, as an index for her own hand: her cellphone. In each photo the phone appears situated in a landscape of rocks. The phone calibrates the stones against its own form, thereby making apparent the scale of each mineral.

Hands have long been used to grip devices, especially ones that fit nicely into the palm. Could the stone have been the first tool-2-hand (t2h) device?

Does the black stone, polished and ergonomic not fit seamlessly into the pockets and pocketbooks of most within our global village? And does the cellphone not contain stones that create the ability to receive and make phone calls? And how do these stones circulate, and where do these cellphones call? And when cellphones go to die and their memory is lost, do they not become dumber than a stone?

How is a stone read? And how is a cellphone read? Does it have to do with the way a hand is trained? And an eye sees? And what do stones see? And is the reading of a stone dependent on the use that stone then takes? And in the way the hand configures itself on along the contours of its surface? And as they say don't forget to buy a case for your precious stone, or it might break.

When stones turn to sand and when beaches are littered with cellphones, those precious things we hunt for might be lodged inside electronic shells and not oyster shells. Because when hands carry phones and not stones what’s changed? And when stones become interfaces and phones become surfaces what are we holding?

The works in this show can be seen to operate as devices or interfaces. To what realm or use these works inspire is ultimately contingent on the interplay between work and viewer, device and operator. User beware!

Kevin Gallagher (1986, Chicago, US) is an artist currently based in Rotterdam, NL. His practice includes visual arts, performance, writing and curating. Gallagher completed his BFA at the School of the Art Institute of Chicago (2009) and his MFA at the Piet Zwart Institute in Rotterdam (2013). In 2012 he attended the Advanced Course for Visual Arts at the Fondazione Antonio Ratti, Como, IT. Recent public presentations include An Evening in Three Acts, PLAYSTATION Fons Welters, Amsterdam (2014); Alongside::D,A,K,A, Lodos Contemporáneo, Mexico City (2013); Nothing Could Be Slow Enough, Nothing Last Too Long, TENT, Rotterdam (2013); Three Artists Walk Into a Bar..., De Appel Arts Centre, Amsterdam (2012). Gallagher is a founding member of the evening salon Blu Heron Social Club with Perri MacKenzie and Timmy van Zoelen (2013-). He has contributed writing to various publications including The Choice is Yours (Mousse Publishing, 2012). He was recently awarded the Werkbijdrage Jong Talent by the Mondriaan Fund. With thanks to the galleries Chantal Crousel (Paris), Cortex Athletico (Bordeaux), Croy Nielsen (Berlín), Maisterravalbuena (Madrid), Mother's Tankstation (Dublin) y T293 (Nápoles, Roma)
www.noguerasblanchard.com