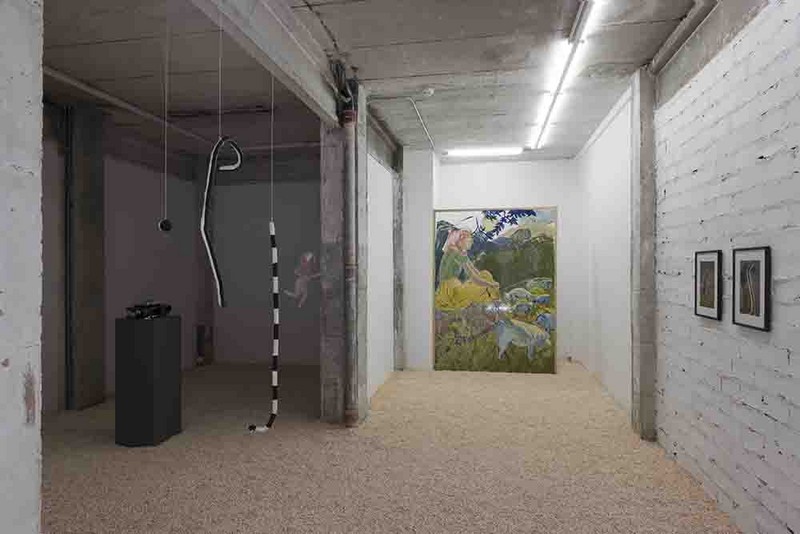 An unnamed man stands in front of the aquarium at the Jardin des Plantes in Paris. He goes there regularly and often spends the entire morning with his face pressed against the glass of the water tank. In November 1902, Rainer Maria Rilke had visited the same botanical garden, and he later recorded in a well-known poem his impression of a panther in a cage, for whom there seemed to be “a thousand bars / and back behind those thousand bars no world.” But the protagonist of our story is not so interested in felids, or any other mammals for that matter. The creatures that capture his attention are some little amphibians that seem absolutely indifferent to their imprisonment inside the aquarium. They are axolotls, a species of salamanders that spend their lives in a larval stage, as if they were patiently waiting for a metamorphosis that is not meant to happen.

He is fascinated by their quietness and the inexpressive look in their pink Aztec faces. A deadpan expression that nonetheless feels oddly familiar to him. Perhaps it’s just the indigenous phonetics of their name —ax-ol-oh-tl—, so difficult to pronounce for Europeans, which reminds him of the continent where he was born. But these creatures seem to look back at him from an unfathomable depth. And somehow he knows that they know. Until one day he notices with horror that for quite a while, a few minutes, maybe a few hours, he has been staring at his own face pressed against the glass of the water tank. He is now an axolotl. And no understanding seems possible with the expressionless man that looks at him through the glass. His thinking has become a thinking inside the aquarium. Now he is certain that the other axolotls also know. They must think as well, however quietly. Amphibian thinking is no longer alien to him. Perhaps he is just projecting human intelligence onto his peers? But now that he inhabits another body, is he still a man? And the familiar face staring at him from the other side, what does he actually know? Can those enormous non-amphibian eyes even recognise his personhood from outside of the aquarium?

The exhibition AXOLOTLISM takes as its point of departure an enigmatic story by Julio Cortázar, Axolotl (1956), in which the Argentinean writer short-circuited the distance between observer and observee. In this fiction, Cortázar invited the reader to think beyond a static dichotomy of subject and object. It might well be possible to approach this type of fiction as a methodology. A strategy towards perspectivism that opens up space for a radical questioning of what constitutes us as persons and subjects of rights. Inspired by Cortázar’s amphibious writing, this exhibition seeks a line of escape from humanism and its exclusions, through the work of artists whose practice explores various forms of radical otherness, nonhuman agency and nonverbal thought, while guided by a materialist sensibility and solicitude for the nonhuman world.

Becoming amphibian is not a change of substance; it is an exercise of political imagination. An exercise involving the embodiment of an otherness that is multiple and variable, which creates a situation in which no one viewpoint can lay claim to a monopoly of truth. In the eyes of the axolotl, the notion of human nature becomes blurred and civilisation is but a water tank. AXOLOTLISM doesn’t have a language of its own; it always speaks idioms invented elsewhere. AXOLOTLISM is not another form of anthropological pluralism, but an ontological one. AXOLOTLISM does not seek an absolute understanding of the worlds of others; it multiplies our universe through theirs.

AXOLOTLISM is just a fiction, but it has its own history. That of those who are not yet human, and those who are not entirely human, but also those who are not just human any longer. This is a history of becomings. A history that is set in motion every time that somebody, somewhere, loses their face to become woman, become child, become animal, become pack, become indigenous, become mad, become amphibian, become minor, become collective, become imperceptible, become blurred... Histories of axolotlism are all made of impossible crossovers and intersections. They are histories of exodus and transmutation, dissolution and passage, flows of desire and lines of escape that go beyond the individual and stand against any fixed and stable identity.

This exhibition is the result of the fourth edition of the NoguerasBlanchard Curatorial Open Call.
www.noguerasblanchard.com