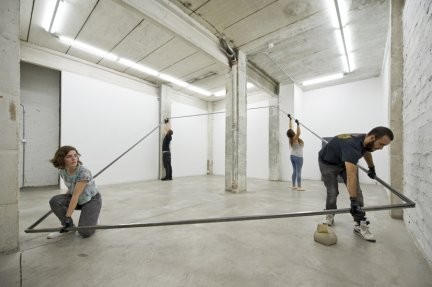 NoguerasBlanchard is pleased to present the first solo exhibition in Spain of Italian artist Francesco Arena (1978, Torre Santa Susanna, Italy). The historical and the personal constantly overlap in the work of Francesco Arena. Employing his own body as a unit of measurement Arena consistently implicates his own person in addressing and representing historical events, in this way showing that stories and history, memory and oblivion have their own physicality, a material side. The inclusion of the artist's anthropometric data - weight, body mass, height, distance reached on tiptoe or distance from the ground to his eyes - emphasizes a number of crucial aspects in his work: the relationship of history to the individual; the relationship between the human body and its environment; the use of data as irrefutable evidence of a quantifiable history translated into numbers. Appealing to sculpture, installation, perfomance, process and conceptualism, Arena's works mine the tension between the apparent simplicity of objects, and the complexity of the histories to which they are bound. With regards to his choice of historical references Arena comments: ““When I choose a fact that informs the work, I’m not doing it to try to discover truth, but to grasp a truth that, starting from the fact in question, becomes a tool for looking at everything else.” 3 Ludwig reflections and 1 horizon, parts from an investigation around the cabin built by Ludwig Wittgenstein on a fjord in the remote town of Skjolden (Norway) in 1911. In a space barely measuring 7 by 8 metres the philosopher lived in exile for long periods of his life and it was where he wrote his seminal work 'Tractatus Logico-Philosophicus'. The main work in the exhibition 'Cabin around studio around pillar' (2014) consists of a metal rod 30 metres long - the length of the perimeter of Wittgenstein's hut - that has been bent to form a rectangle of 5.32 x 3.95 meters corresponding to the exact perimeter of Arena' studio. For the duration of the exhibition opening, four performers will rotate the rectangular structure 360 degrees around the central pillar in the gallery. A movement of apparent simplicity becomes tiring and arduous due to the weight and shape of the structure and the tightness of the space available for such maneuver. Arena's installations usually incorporate performative components that require time, effort and patience, the perception of fatigue becomes a metaphor of identification. 'Cabin around the studio ...' highlights two other aspects of Arena's practice: the convergence in the present of two situations or objects distant in space and time, as well as the use of measurement as an element that legitimizes the existence and veracity of facts. The concept of family portrait is one of the recurring themes in Arena's work. 'Family Portrait (Eyes)' (2014) consists of a slate engraved with the first three sentences of Wittgenstein's 'Tractatus...' the height of each sentence corresponds to the distance from the ground to the eyes of the artist, his wife and daughter respectively. A second portrait 'Two Looks' (2014) points to the mathematical accuracy in Arena's practice, a sculpture consisting of a bronze cube embedded in a cube of clay. The length of the edge of the bronze cube - 10cm - is equal to the exterior distance between the eyes of the artist while the length of the clay cube - 12.5cm - corresponds to the distance between the philosopher's eyes. Metal, slate, clay, bronze, are some of the materials used in the exhibition. Commenting on the specific characteristics of each material, Arena notes: 'A key part of a piece is the approach one has towards material, the process to arrive at a finished, closed object into which information is embedded. Etching an inscription in stone is different from engraving it on clay, the materials as well as the people involved are different, as are the stories that each material brings with it and, of course, the meaning it has in itself'. The piece 'Brackets (Madrid horizon)' (2014) consists of two galvanized metal brackets attached to the wall marking the length of the artist's open arms, and from which a number of objects are suspended that the artist found on the streets of Madrid. As a readymade work 'Brackets (Madrid horizon)' provides a new perspective on the use of the object, the significance of the material and the creative processes found throughout his works. Francesco Arena lives in Cassano delle Murge, Bari, Italy Francesco Arena’s recent solo exhibitions include: Discorso (Performance) and Opere, Monitor (Palazzo Sforza Cesarini), Rome (2013); onze mille cent quatre-vingt sept jour, Frac Champagne-Ardenne (2013); Ogni cosa a suo tempo – Capitolo V (with Dan Rees) Basilica di Santa Maria Maggiore, Bérgamo (2013); Com’è piccola Milano, Peep-Hole, Milán (2011); Cratere, De Vleeshal, Middelburg, Holanda (2010); 3,24 mq, Nomas Foundation, Roma (2008). Group exhibitions include: Iconica. Arte urbana al Foro Italico, Ponte della Musica Armando Trovajoli, Rome (2014); Ritratto dell’artista da giovane, Castello di Rivoli, Turin (2014); Italy in Songeun. We have never been modern, SongEun Artspace, Seoul, Korea (2014); vice versa, 55 Biennale di Venezia, Pabellón Italiano, curated by Bartolomeo Pietromarchi, (2013); Sotto la strada, la spiaggia, curated by Benoit Antille, Michele Fiedler, Andrey Parshikov, Fondazione Sandretto Re Rebaudengo, Turín (2012); La Storia che non ho vissuto (testimone indiretto), Castello di Rivoli, Torino (2012); Il Belpaese dell’Arte. Etiche ed Estetiche della Nazione, curated by G. Di Pietrantonio M.C.Rodeschini, GAMEC, Bergamo (2011) and Les sculptures meurent aussi, curated by Lorenzo Benedetti, Kunsthalle Mulhouse, Mulhouse (2010).
www.noguerasblanchard.com