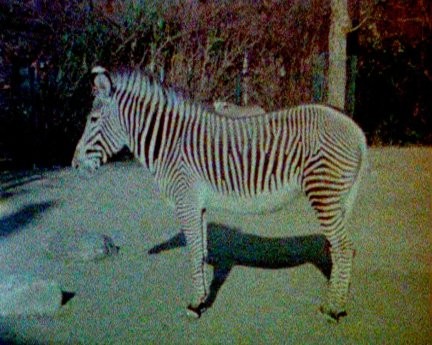 super 8 film transferred to digital
location: Berlin zoo
on a sunny winter day.
(Extracts from conversation with the artist)

Untitled (Zebra), by the artist Haris Epaminonda (1980, Nicosia, Cyprus), is the second presentation of the series The Story Behind, curated by Direlia Lazo.

Haris Epaminonda's work consciously resists being narrated, even if her installations, films, and collages confront the viewer with intriguing images. Her works are constructed around the poetics of the image per se, of the experience of space, of the casual or premeditated encounter between the viewer and the work. In the majority of cases, the story that accompanies the image, such as the where, what, and why, are omitted by presenting the image devoid of references, subject to the interpretation and specific universe of each viewer.

In Untitled (Zebra), we see a zebra in profile instinctively looking from side to side. The image lasts a few seconds and is played in a loop, thus perpetuating the recorded moment of the zebra in stillness and doubt. The flatness and simplicity of the image leads us to focus on the situation as a metaphor, or as a symbolic allusion. Knowing that the genetic makeup of zebras leads them to stay alert in their sleep to avoid attacks from other animals, the scene might appear to be an ode to this eternal state of wakefulness, in contrast with an image that seduces and invites to the serene contemplation of these creatures' beauty and innocence. For Epaminonda, these moments represent true poetic interludes.

NoguerasBlanchard would like to thank the collaboration of Rodeo, Istanbul.
www.noguerasblanchard.com