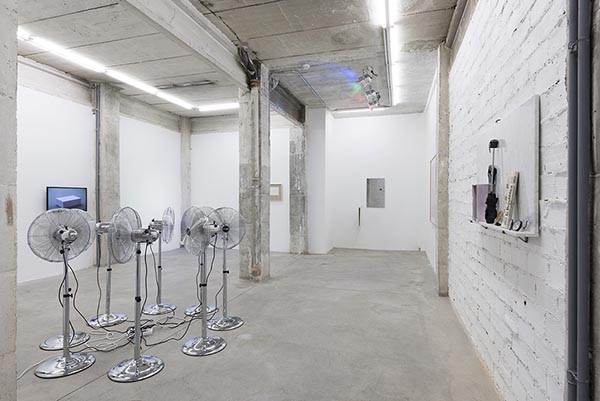 The exhibition addresses the concept of alterity associated with The Book of Disquiet (1) that describes, in a diary format, the reflections of Bernardo Soares, one of Fernando Pessoa’s heteronyms, on subjects such as the search of his own personality, his interaction with his surroundings and the inconclusive phenomenon that is produced in this encounter.

The phenomenological-existential theories about “otherness” in vogue whilst The Book was written, between 1913 and 1935, placed the other’s subjectivity as essential to the Self. The subject of the other ego is capital for Husserl’s Phenomenology as well as the constitution of the being of the Heideggerian Dasein (2). Likewise, quoting Husserl, “the “Other”, according to his own constituted sense, points to me myself; the other is a “mirroring” of my own self and yet not a proper mirroring, an analogue of my own self and yet again not an analogue in the usual sense.” (3)

This “mirroring” becomes evident when one is alone, states of isolation and solitude reveal our evidence to ourselves (a person understood as consciousness and the world understood as an object constructed by that consciousness) and the connection that we have with the entities that surround us. “The man in the corner of the dance-hall dances with all the dancers. He sees everything, and because he sees everything, he lives everything.” (4) We exist for one another, we are against one another, we can do without one another, we walk past one another, we do not matter to one another. These relations in the exhibition occur between the individual and his internal self (Pessoa and his heteronyms, Griffa and the lines he draws on the paper or the spectator who sees his reflection in the work of Perejaume); between two individuals (the two fictional characters in Kovanda’s work and amidst Hansdöttir’s play of lights and shadows); between individual and collective (John Cage-Erik Satie-Merce Cunningham).

These two last examples are summarized in the story of a curious shadow in the life of John Cage: the French composer and pianist Erik Satie. Cheap Imitation was a convenient solution to an annoying problem. Merce Cunningham, Cage’s life partner, had the desire to use the first part of Satie’s symphonic drama Socrate for a dance. Cage went on to complete his transcription, extending his work to the other two movements of the drama, and encouraged Cunningham to do the same. However, without the permission of Satie’s publisher, Cage and Cunningham were faced with the problem of a scheduled dance premiere with no music that could be legally performed. Cage’s inventive solution was to create a solo piano piece using the I Ching and based, rhythmically, on Socrate and Cunningham’s dance. The result is a music that has the rhythms and general contours of Satie’s music, but which is otherwise completely different. The work in this exhibition is a working sheet of the piece transcribed for orchestra in 1972. Cage commented that in making a composition that differed so much from his regular work, his ideas were sinking in a confusion caused by his great love. Cage-Satie-Cunningham didn ́t live, paraphrasing Husserl, with each other or simply alongside one another, but in one another: “The other is co-present in me”. (5)

In a different way, Pessoa carried his heteronyms within and it is through them we can know his otherness. In the specific case of Bernardo Soares, his desassossego (a Portuguese word of complex translation due to its multiple meanings, and illustrated in the exhibition by the work of Arena) (6) associated with his monotonous routine (the endless movement of papers that are being accumulated and after have drifted away) (7) draws empathy from us when we recognize ourselves as individuals in constant change in search of something which is beyond what we have in our hands. In this way the opacity that is seen in the unknown individual, which can be confused with the one of an object, falls to the ground and reveals the Other on a level that makes us see our selves in them. According to Scheler, the person can never be thought as an invariable thing, highlighting, like Husserl, the irreducible aspects of the individual. “Being with one another requires a special approach in order to see through them”. (8)

Notes:
(1) Since the 60s occurred several attempts to publish the work but always unsuccessfully because Pessoa had left the papers in complete disarray. It was first published in 1982. In 1991, Teresa Sobral Cunha published an edition where there were two heteronyms (Vicente Guedes and Bernardo Soares) . In 1998, Richard Zenith attributes, as in the first publication, all the work to Bernardo Soares. The important matter is that there are disputes over the authorship until today.

(2) There are different translations of this concept widely used by different philosophers but accentuated by Heidegger in his works. It is transcribed in all languages ​​for its uncertainty. The ‘Da’ is associated with a spatial-relational element indicating ‘here’, ‘there’, ‘yonder’. And ‘Sein’ is ‘to be’. In short, it refers to being through into existence.