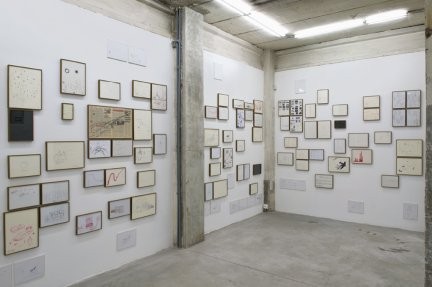 NoguerasBlanchard is pleased to announce the first exhibition of drawings by Wilfredo Prieto (Sancti Spiritus, Cuba, 1978). Internationally acclaimed for his installations, objects, and interventions Prieto has developed an extensive body of works on paper that runs parallel to his larger projects. The exhibition A coffee made by Di brings together over a hundred drawings in different formats that explore an intrinsic aspect of the artist's creative process, ranging from his student years at the Instituto Superior de Arte (ISA) in Havana to his most recent exhibition at the Sala de Arte Publico Siqueiros (SAPS) in Mexico DF.

The equation that distils Prieto's methodology, phrased by Gerardo Mosquera as 'sharp idea + simple artefact = maximum meaning', aptly defines his sculptural works as well as his works on paper. Concise, fast strokes on notebook pages, school diaries and drawing pads form a distinct lexicon of fragmented and individual ideas that concern him and eventually become materialized as physical objects. The selection of drawings includes preparatory sketches for projects and exhibitions, drawings of works, the reiteration of poetic figures such as the Ouroboros (the image of a serpent eating its own tail) alongside images of the everyday, for example the drawing that gives the exhibition its title.

'The paper is the first place where I visualize ideas, I refine them, and turn them around until I get an image or idea that convinces me'. One of the main interests of this exhibition is to be confronted with the workshop/space represented by the pages of the notebooks. In contrast to the hundreds of small format drawings the exhibition includes a long drawing on cardboard, measuring almost 10 meters, encompassing all Prieto's projects through 2010 and which is in itself a kind of retrospective on paper. Here, the works unfold in a way that privileges conceptual or spatio-temporal associations revealing highly personal connections and interpretations.

Another group of works are the drawings of projects or ideas for future exhibitions. One of the most ambitious is The infinite journey, a road in the shape of a Möbius strip, where cars always return to their starting point, so that any trip on this road would paradoxically confront us with the frustration of our own limits. Another future project is Museum, where each gallery in a hypothetical museum is classified according to objects of leisure, power and pleasure in contemporary society. Or Stadium, an un-realized installation where a sports stadium is transformed into a lake.
A coffee made by Di continuously reveals the contrast between a naïf drawing and sophisticated materialization. A spiral pencil drawing that culminates in a round vehicle and then becomes a 60-meter linear installation made with spherical objects - Avalanche, 2003 - or a fishing rod that is fishing itself becomes the prelude to Crane, 2007, a huge crane with its hook attached to its body unsuccessfully trying to lift itself. Simple, minimalist drawings of spontaneous and distinct ideas disclose an unknown facet of Wilfredo Prieto's work.
www.noguerasblanchard.com