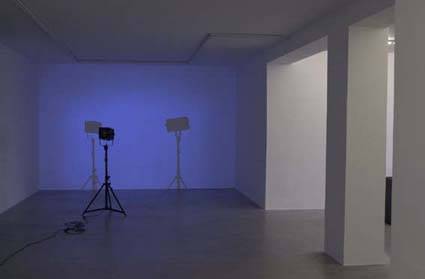 Galerie Nordenhake is pleased to present "F for Fake", its first solo show with the young Swedish artist Christian Andersson. The title for the show and for the main installation comes from Orson Welles' so - called documentary film from 1976. In this context the title reads like a disclaimer - there is nothing real to see here. Typically Andersson employs sleights of hand and optical illusions to question the viewer's notion of truth. He has created chairs that magically change their colours, bathroom mirrors that suddenly reveal what lies behind them, and lights that cast no shadows. His work owes much to Dan Graham's play deceptive stratagems and is infused with elements from popular culture of the 1960s like Philip K. Dick, lava lamps and sci-fi imagery.

The main work of the show is the installation "F for Fake" where a single spotlight lights up a wall of the darkened gallery. The spotlight - glowing with a purplish light - surprisingly casts two distinct shadows onto the wall, reflecting the tripod with the spotlight in different perspectives without revealing the light source. In its contemplation of truth and deceit "F for Fake" is closely linked to Bruce Nauman's neon sculpture "The True Artist Helps the World By Revealing Mystical Truths" (1967). In the second installation, called "The Philadelphia Experiment", a cover for a videotape is placed in a display case.

Approaching the vitrine the viewer finds an object in a state of disintegration. The inexplicable high-speed vibrations of the videotape seemingly indicate that the object is undergoing a transitory process, perhaps into a new state. The title and storyline are borrowed from the film "The Philadelphia Experiment" (1984), which is about an experiment that conspiracy theorists claim the American military conducted in 1943. In short, it supposedly involved a battleship disappearing into a wormhole of time and space during an electromagnetic attempt to make it invisible to radar. Andersson's installation gives the possibility to experience the very moment of when an object, a concept, or a truth disappear. The videotape itself functions as a symbol for an era that we already can see the end of and is connected to the discourse about the status of photography and other documentary media as testimonies of truth.

In his work Andersson is highlighting a theme that has been central throughout art history - the unstable and transitory nature of perception. There is a phenomenological approach in his pondering of what is real, what we take to be real, and what we take to be illusion. In the way Andersson is presenting his works he makes it clear that what we are seeing is a model or a speculative experiment, one possibility of what could be made in another way. Christian Andersson is interested in the moment that follows when the viewer tries to re-establish logical thinking in order to find his or her way back to common ground, what we perceive as the normal and logical way. Most important, Andersson believes that these moments unsettle our notions of rules, spaces, truths and structures.