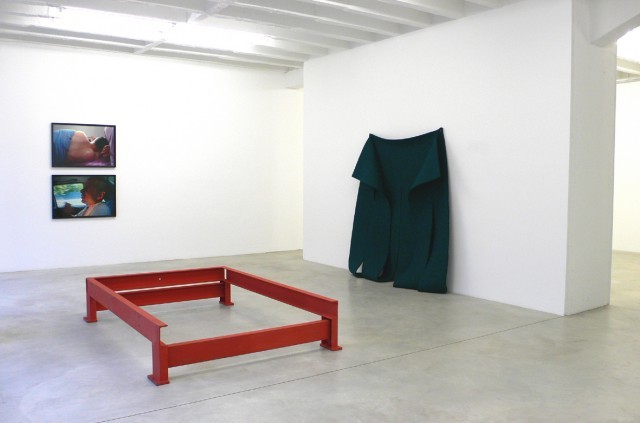 Galerie Nordenhake is pleased to present ‘Dog Star Man’, a group exhibition titled after Stan Brakhage’s most ambitious experimental film produced in the early 60’s. Often defined as a metaphor for the unity of creation, the film expresses a mythic conception of the struggle and fall of Man and its relationship with the Cosmos. Its images include both the microscopic and telescopic, and range from solar explosions to brief glimpses of the beloved's body.

In a similar way, this exhibition brings together artists who share an irreverent attitude toward the boundaries of the materials and genres in which they work. ‘Dog Star Man’ exploits the formal and ideological power of juxtaposing images to create everything from social and political commentaries to individual fantasies and universal meditations. As the elements of the film gradually build and cascade into one another, one begins to see the connections between them more and more clearly; in the same way the combination and display of the different works in the show creates a connection that is essentially associative and visual. The formal construction of the exhibition, the interrelationships and significance of the single pieces, aims to create unexpected dialogues.

The pure investigation of the form is crucial in the research of both Olle Baertling and Robert Morris. Widely recognized as one of the most significant artist of the 20th century in Scandinavia, Baertling (1911-81) developed a strongly individual style with bright colours in triangular shapes, which in ‘Davi’ (1956) appear to move out of the frame into the infinity of space. On the other side Robert Morris’s iconic ‘Untitled’ (Green Felt Piece) (1983-84) obliquely alludes to the human body through its response to gravity and epidermal quality. A further reference to form and material can be found in Helen Mirra’s ‘Map Lichen’, where the geologic time of the rock coexists and contrasts with the brevity of the clothed person’s life.

The intimate documentation of people living marginal lifestyles in cosmopolitan centers defines Nan Goldin’s photographic production. Working directly from personal experience, she captures moments that cumulatively tell stories of friendship, desire and their aftermath. On the contrary the exciting, wild world emerging from Carl Fredrik Hill’s (1849-1911) small group of works contrasts sharply with his outwardly almost eventless life. Regarded as a major voice in the context of the art of mentally disordered persons and outsiders, Hill’s ink and crayon drawings possess a concentrated, visionary quality.

Alessandro Ceresoli and Jimmie Durham investigate the glitzy garments of "savagery" and "primitivism," synonyms for alienation and disenfranchisement as well as for resistance, from different perspectives. Ceresoli’s almost monochromatic black drawing combines images produced by the Fascist propaganda during the occupation of Eritrea with a personal and imaginary iconography, while Durham's installation is deceptively modest, its anger and its intelligence veiled by a deliberate obtuseness and formal awkwardness.

Both Meuser’s and Georg Herold’s work is filled with a clear mocking humour, which they use to criticise art-historical, political, and socio-cultural themes. This playful ambiguity does not allow an unequivocal interpretation. The graphic designer Florian Ludwig presents a poster which functions both as promotional material for the exhibition and, at the same time, as his individual contribution to it, thus conceptualizing the very nature of the exhibition and its display in a commercial setting.
www.nordenhake.com