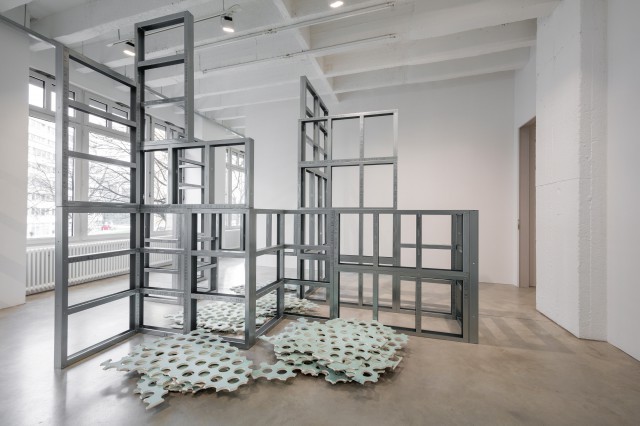 For her exhibition “Imaginary State” Franka Hörnschemeyer developed a large site-specific installation for the gallery’s first-floor space. Exploring the architecture and spatial configuration, it is a poignant work for the inauguration of the new permanent exhibition spaces of the gallery. In addition to the labyrinthine installation built from metal stud framing and sheetrock, several wall objects made from various industrial construction materials as well as architectural plans will be on view. These objects are part of a body of work the artist has been working on since the early 1990s.

Franka Hörnschemeyer is renowned for her extensive investigation of the notion of space, and how it relates to the human body. Her practice focuses on specific sites and is concerned with broader historical, philosophical and sociological questions. She presupposes a comprehensive notion of space, explicitly entailing our bodily experiences of a given space.
The site-specific installation in the gallery is based on shifts, a significant strategy for Hörnschemeyer’s work. She basically employs the metal stud framing against its inherent qualities as a construction material. The framework was not covered with sheetrock to create stable walls but instead used to build self-supporting modules. Following the minimalist principle of stacking, she erected a solid grid structure that creates a space of its own. The installation “Imaginary State” meanders through the whole gallery, its outline referencing the ceiling’s structure with its parallel beams—a distinctive characteristic of the building’s architecture.

The sheetrock, customarily used for constructing drywalls, is placed in layers directly on the floor, creating different three-dimensional objects. The pale-green boards are perforated by multiple round holes, and shows traces of the time-consuming process of drilling them. Both the sheetrock’s material composition as well as its fragility become visible. Holes are a recurrent theme in Hörnschemeyer’s work. They make the material porous and—as Henry Moore pointed out—connect one side with the other. These perforations and penetrations, which are also distinctive for the metal grid structure, make us aware of space in a more physical way. Sheetrock, a preferred material of the artist since the 1990s, is a disposable material that allows for temporary and improvised modes of construction. The material itself is thus emblematic of our fast-paced times, characterized by an expansive and homogenizing consumer culture.
The combination of metal grid installation and sheetrock sculptures create a dense labyrinth, which we are able to comprehended with the help of a floor plan. By passing through it, any sense of clear borders and endpoints gets lost. Inside and outside are inseparably merged and multiple perspectives and passageways unfold. The resulting openness is essentially a category to describe our reality, when we assume as in the logic of quantum physics, that the boundary between subject and object is fleeting.