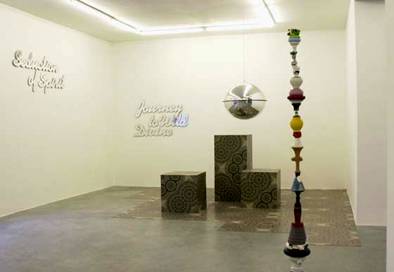 In Christian Andersson's work Soft Drink Stand (2001) a slide projector beams a science fiction text from 1959 onto a freestanding wall. The text by Philip K. Dick recounts how the reality of the protagonist turns into a mere description of itself. Both the uncertainties and the experience of the character in the novel get appropriated by the viewer when the projected text seems to pierce the solid wall and its mirror image looms on the other side of the wall. Thus the space in between becomes the theme in Andersson's work. The viewer is offered a glimpse of a kind of third reality, a place that is neither really physical nor knowable.


For this show young artist Ann Böttcher has created a group of four extraordinary delicate pencil drawings titled Germania and the Weeping Spruces (2006). Three drawings depict weeping spruces whereas the fourth renders bullet riddled neo-classical columns. With the drawings Böttcher refers to descriptions from the Third Reich when German soldiers were compared to pine trees. In her work the artist explores the relation between nature and nationalism and studies the iconography of nature as a symbol for establishing territorial claims or national identity.

In Safe Zones No 9 (2004) Jonas Dahlberg plays with our perception. A former student of architecture, he brings together two contrasting ways of relating to space: films and models. The work consists a monitor showing surveillance camera footage of restrooms and four models that recreate men's and lady's restrooms. The models were done with simple materials from the architect's studio and conducted with high precision and attention to small details like the recreation of door handles. Nevertheless they are not perfect trompe l'oeils but as the rough surface of the sinks and urinals or the flush handles, which were cut out from thin plastic with varying precision, indicate their look was adjusted to the reproductive capacities of the camera-eye. In fact the live feed in the monitor doesn't come from a real restroom but from the models. What we are looking at is a fictionalised architecture. A recurring element in Jonas Dahlberg's works is the methodology of surveillance. Seeing or being seen, real world or fiction - the shift between these positions in his work creates a feeling of spatial ambivalence and also an interplay between active and passive surveillance.

In one corner of the gallery space Gunilla Klingberg has covered the floor with beautifully ornamented linoleum tiles. Her work Repeat Pattern (2004) appears as a total environment consisting of a minimalist landscape with cubes covered with linoleum and a mirror globe assembled out of two ordinary supermarket surveillance mirrors hanging from the ceiling. The black linoleum pattern is composed of logotypes from cut-price supermarkets like Aldi, Lidl, or Spar. On the walls two text objects are placed. They were laser-cut from mirror glass and quote words of New Age-wisdom from Deepak Chopra. Klingberg often employs symbols that are visible in every day life, and thus points to our own boring, basic needs and the many everyday doings we perform to satisfy them. In her work the artist grapples with the complex question whether it is possible to turn even the most ordinary rituals, such as buying food in a supermarket, into something spiritual.

Sirous Namazi's aesthetics has its foundation in formal, painterly and minimalist problems and his emphasis is the process behind a work as much as the final result. Namazi presents one of his colourful - although brittle - porcelain columns from his Patterns of Failure series from 2005. One trait of Namazi's work is the exploration of the notion of failure in the artistic production process, and a "faux pas" was also involved in making the columns. In a rather uncontrolled, violent act Namazi smashed the porcelain household goods he had bought second hand and then glued them together in search for a possible balance among the fragments. The destructive gesture is a starting point for something new and stands in stark contrast to Namazi's precision and sensitivity in building up the tall fragile column as well as the work's painterly composition. The title of the series originated from a website dedicated to case studies on collapsed buildings.

In his most recent project Horizon (2005) Magnus Wallin has had two prosthetic eyes made in glass as exact copies of his own eyes. The starting-point for the work is the history of medicine, and it refers to an image of a weeping skeleton from Andreas Vesalius' 1543 anatomical atlas "De Humani Corporis Fabrica". The glass eyes are suspended from the wall at eye level. The white of the eyes has a pinkish tone, and the numerous blood vessels can be clearly seen. The bloodshot eyes look as they have just been weeping, which provides the object with an emotional charge. Wallin's animation film Anatomic Flop (2003) is made in one take as if it is made in real time. On a racecourse eight anatomy models prepare for a 100-meter race. A giant winged hourglass sets off the race but suddenly a heavy stroke from the wings beats them back towards the starting line, and the race will have to begin again. As in a many of his films the protagonists are caught in a repetitive circle since they will never reach the finishing line. The winged hourglass is symbol of the inevitable passing of time and acts in the film like a prime mover.